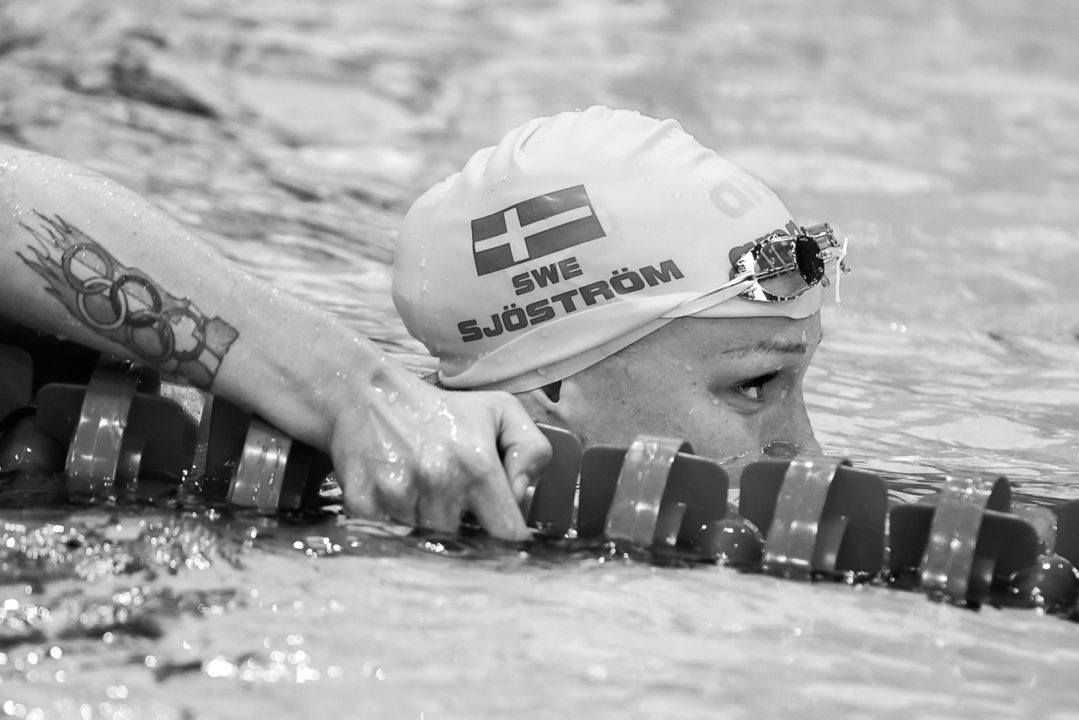 24.43 in a 50 butterfly for women is kind of ridiculous, and it's astounding how much faster Sjöström has been compared to the next-best competitor. Archive photo via Peter Sukenik/www.petersukenik.com

It’s not so much about the medal for Sarah Sjöström, but more so how close she can get to her insane world record in this event. 24.43 in a 50 butterfly for women is kind of ridiculous, and it’s astounding how much faster Sjöström has been compared to the next-best competitor. In fact, it was too tempting not to get the numbers about Sjöström’s WR compared to the other 50’s of stroke. Check out the findings below:

What this means is that with most of the 50’s of stroke, somebody has been fairly close behind the WR-holder. In all other cases, the difference has been a tenth of a second or less. With Sjöström, her 50 fly WR is over 2.5% faster than the next-best performer, or a whopping 0.64 of a second faster. Her race will be against the clock in Budapest as she tries to eclipse that amazing WR of hers– she has been 24.76 this year, already faster than her 2015 gold medal time, and with the way she’s been swimming this year, she has a great shot at setting the standard even higher.

While Sjöström has set herself apart, the scramble for silver will be between a pack of swimmers without much between them.

High-profile butterfliers Kelsi Worrell and Rikako Ikee will be front-runners hunting for silver. Ikee of Japan set a new WJR in this event in April, as she and Canada’s Penny Oleksiak have been trading blows for this WJR for the last couple of seasons. Ikee’s 25.51 is the 2nd-ranked time in the world, with Oleksiak there at 25.76 for 5th. Worrell, who won U.S. Trials by a considerable margin, has been 25.69 this season for 4th.

Right in the middle of those three medal hopefuls is Dutch sprinter Ranomi Kromowidjojo (25.59), who opted out of this race in 2015 but won the bronze in 2013. She’s far more well-known for her sprint freestyle prowess, but she’s a fantastic sprinter who will be right there in line for a medal. Her countrymate Maaike De Waard will also be a finals candidate, having been 25.83. De Waard is right in between two other Europeans in Belgium’s Kimberly Buys (25.78) and France’s Melanie Henique (25.84).

Meanwhile, China’s Lu Ying, who earned the silver in 2013 and the bronze in 2015, is another strong contender for a medal. Lu was just off of the 100 fly podium last summer in Rio, ending up 4th in 56.76. She’s been in the 50 fly final at every Worlds since 2011, so she’s one of the more experienced racers like Sjöström, Kromowidjojo, Buys and Henique.

We think one French swimmer will final in this, with a tossup between Henique and Beryl Gastaldello. In short course, Gastaldello is the better of the two, but the plane is flattened in long course. We like the edge to the younger Gastaldello on this occasion.

Two Olympians from California are coming off of great NCAA seasons: Cal/Egypt’s Farida Osman and USC/Sweden’s Louise Hansson. They finished 1st and 3rd, respectively, in the 100y fly at NCAAs, while they nearly tied at Pac-12s as Hansson (50.39) edged Osman (50.40) for the conference crown. Osman finaled in this event in 2015, while we haven’t yet seen Hansson put up a big swim in this event.

Dark horse: Emilie Beckmann of Denmark. She’s the second-best performer in this event in Danish history behind Jeanette Ottesen, and the 20-year-old has been as fast as 25.92 this year.

Oleksiak will be faster

Another way to look at the peculiarity of 50fly record is not to compare it to results of other swimmers but to compare it to Sjostrom herself at other events. If one checks on Sjostrom’s personal bests at 50 fly, 100fly, 50 free, 100 free, 200 free (races that she was specifically trained for ) then it will be noticed easily that at any but 50 fly event she was consistently close to her PBs. 50 fly stands alone in this regard like it was different Sarah that day in local pool. Maybe it was indeed very windy that day.

Always my concern in outdoor facilities. There were many, many PBs behind her that day too.

It was very windy that day, how big is the difference between her 2 fastest swims in the 50 fly?

24.43 & 24.69. Kinda big difference, but that depends what you compare it to. When you factor in no one else has ever been faster than 25.07 it’s such a massive gap either way that you can’t say for sure one time is significantly aided. She’s ahead of her time in this event.

What day’s this event on? This is definitely the least-likely WR for Sjostrom to get – feel like she can even be less than perfect in every other race and still potentially get it, but this one is just so far out there.