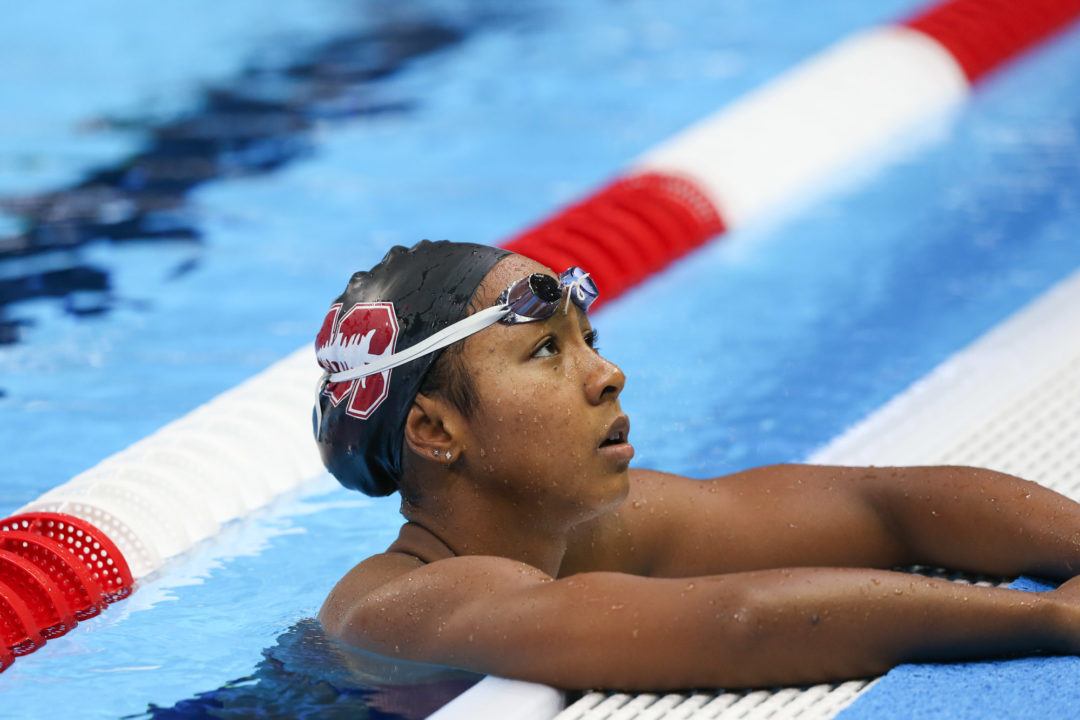 After breaking the NCAA and American Records at the Pac-12 Championships, the Stanford Cardinal squad is the overwhelming favorite to win the 800 free relay at the 2017 Women's NCAA Championships. Archive photo via Tim Binning/TheSwimPictures.com

After breaking the NCAA and American Records at the Pac-12 Championships, the Stanford Cardinal squad is the overwhelming favorite to win the 800 free relay at the 2017 Women’s NCAA Championships. Katie Ledecky, Simone Manuel, and Lia Neal are likely to swim it, while the Cardinal has options, such as Ella Eastin and Katie Drabot, for the additional leg. Freshman Drabot has been as fast as 1:43.71 this season, but Eastin rolled to a 1:42.18 on the 2nd leg of this relay last season.

In team terms, it might make sense for Stanford to leave Manuel off this relay. The star sprinter can only swim four of the five relays, and this is the only relay race the Cardinal can pretty likely win without her. The choice for Stanford now comes down to using Manuel on this relay with a chance for a historic American record time or leaving Manuel off this relay with a shot for a historic sweep of all five relays.

No one is likely to come close to the Cardinal, but the race for 2nd between Cal and USC should be a good one. Cal will field Amy Bilquist and Katie McLaughlin, who have both turned in sub-1:43 splits for the Bears previously. Headlining USC’s relay are freshman Louise Hansson, who posted a 1:42.10 leadoff split at Pac-12s, and Kirsten Vose, who led off with a 1:43.08 at last season’s NCAAs.

Michigan will be in the mix with All-American freestylers G Ryan, Siobhan Haughey, and Rose Bi. Virginia also has an All-American in reigning distance champ Leah Smith, who has delivered multiple 1:42 splits on the leadoff leg. Teammate Kaitlyn Jones has come up with a 1:42-high split on the anchor leg.

After snapping Georgia’s winning streak in this event at the 2017 SEC Championships, the Aggies will look for a top 8 finish at NCAAs. Sarah Gibson and Claire Rasmus should be able to throw in a pair of 1:43s if they match their conference meet performances. In-state rival Texas sits one spot ahead of them at 6th seed. The Longhorns will rely heavily on Claire Adams and Joanna Evans, who put up a pair of rolling-start 1:44s on the relay at Big 12s.

A handful of teams including NC State, Georgia, Wisconsin, and Kentucky will be battling for top 8 points. Kentucky has the slight edge going into the meet, largely thanks to Asia Seidt splitting a 1:43.89 on the 2nd leg at SECs.

Does anyone know when the line up will be declared?

Swommers – lineups don’t have to be declared until they’re at the blocks. They used to publish them ahead of time, but stopped.

Its crazy to think that this is the worst relay. I still think they can be top 5 or 6, but with Olivia and Chantel on the other relays some girls will have to step up. I would assume Meghan and Kylie will be on this relay, last year they were both 1:43 and if they get a couple more girls at 144-low 145, which is very possible they can be top 5 or 6.

I doubt they use Simone here. She can only swim 4 relays and 3 individual. Makes sense to have her on both medleys and the other freestyle relays since they are much closer.

Agreed. Would love to see her on it to see the absurd record they could post . . . but Stanford has no reason to use her here. She’s far more valuable on the other 4 relays. They obviously do not need her here. They can’t even say they are chasing a record with her — they’re likely to re-break the record without her! Alas, Stanford is trying to win a title — not post crazy times for us swim geeks.