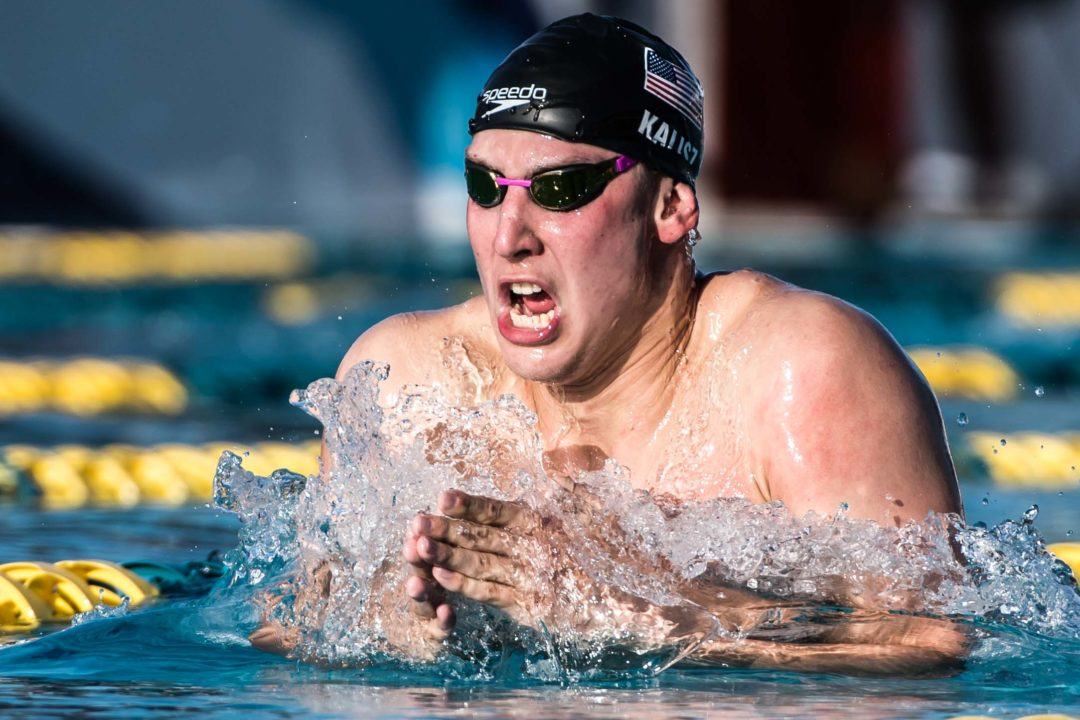 Chase Kalisz has swum incredibly well this season, and his world leading 4:09.43 puts him in the driver seat at World Trials. Archive photo via Mike Lewis/Ola Vista Photography

The American men have long been the dominant force on the world stage in the 400 IM. Heading into last summer they had won every Olympic title since 1992, and even though Chase Kalisz couldn’t quite get the job done, his performance for silver was very impressive.

His 4:06.75 took nearly two and a half seconds off his best time prior to the meet (he also went a PB in prelims), and made him the 5th fastest performer in history. Now sitting as the lone man under 4:10 this season, he could very well be the man to return the U.S. to the top of the 400 IM podium this summer in Budapest.

Last year the former Georgia Bulldog took off two seconds from in-season to trials, and then two more from Omaha to Rio. Look for a similar progression this year. After going 4:09.43 in Atlanta, 4:07 would be a good bet for trials, and once the World Championships roll around he could even be toying with Ryan Lochte‘s 4:05.18 mark as the 2nd fastest ever. Even if that may be a little too optimistic, Michael Phelps‘ Championship Record (4:06.22) is certainly at risk to go, either by Kalisz, Olympic champ Kosuke Hagino or defending World champ Daiya Seto.

Behind Kalisz, the battle for second involves his Georgia Bulldog teammates Jay Litherland and Gunnar Bentz.

Litherland ran down Lochte for the second Olympic spot last summer, and went onto make the Olympic final placing 5th. Shortly after winning the event in 4:13.79 at the Santa Clara Pro Swim he came right back with a win in the 200 free, showing his training has been on point. After three 4:11s last summer he could very well crack the 4:10 barrier this year.

Bentz was 4th at Trials going 4:13 both in prelims and finals, and like Litherland is known to close very strongly. Heading into Omaha his 2016 season-best was 4:17.2, but he’s only 4:21.9 heading to Indianapolis. It’s tough to predict if a nice taper will bring him back down to his level from last year, but I predict he won’t be far off.

Aside from the Georgia guys, Cal’s Josh Prenot is also in the running to earn a spot on the Worlds team in this event. Prenot scratched the final in Omaha after posting a 4:14.1 in prelims, and won silver at the 2015 World University Games behind Litherland back in 2015 (where he went his best time of 4:13.15). He’s been the 3rd fastest American this year at 4:14.7, and looks like he could be in for a big drop this summer after he didn’t show all his cards last year. As the 3rd fastest man ever in the 200 breast he’ll certainly thrown down a fast split there, and the freestyle leg is where Litherland and potentially Bentz will be trying to run him down.

Stanford’s Abrahm DeVine was one of three swimmers who benefitted from scratches to slot into the 400 IM final in Omaha, and made good on it lowering his personal best down to 4:14.98 finishing 6th. He’s been 4:17.5 this season, nearly two seconds better than he was last year in-season, and was also two seconds better at NCAAs than he was last year. DeVine is one who could surprise the others and push for a spot, and it’s worth noting his free split in Santa Clara (57.6) was over two seconds faster than when he went his best time (59.9), which is a positive sign.

Sean Grieshop, who will begin his college career with Cal in September, is another up-and-comer in this event. He won the World Junior title in 2015, the Junior Pan Pac title in 2016, and in between had his two fastest swims ever to place 5th at the Olympic Trials. It might be a year or two away from his time with Kalisz and co. at the helm, but he’s certainly on the rise.

Those six look to be pretty safe bets to final, but behind them the battle for the other two spots will be fierce.

Charlie Swanson is one who has seen steady improvement in this event every year, and will challenge for a finals berth. After placing 4th at the 2015 World Juniors he broke 4:20 for the first time in Omaha to make the final, and finished the summer off with a silver medal at the Junior Pan Pacs in a best of 4:17.3. Heading into last year’s Trials he had already been under 4:20 in-season, so his 2017 best of 4:25 leaves a lot of time to knock off with taper.

There are a few others who weren’t really on the radar last year but have emerged this season with some top ranked swims. Kieran Smith was ranked 26th in the country last year but sits 5th this year with his 4:20.37, and Grant Sanders has moved up 74 spots to sit 7th at 4:21.90. Smith, born in 2000, is on the rise and one to watch out in the future, while Sanders has seen a return to form after a poor 2016. Look for both to push for a spot in the A-final.

Others to watch for in this event include distance free aces Andrew Abruzzo and Robert Finke, plus college standouts Sam McHugh, and Jonathan Roberts.

As mentioned in other previews, Andrew Seliskar is a question mark heading into the meet. He hasn’t raced – long course or short course – since NCAAs, where he did finish as the runner-up in the 400 IM, but he would need to be much better than his 4:20 from last year to be factor.

Darkhorse: Youngster Mikey Calvillo from the Alamo Area Aquatic Association has lowered his best from 4:28 in 2016 to 4:26 in January and now 4:24.86 with his 4th place finish at the Santa Clara Pro Swim. If he can produce another solid drop in Indianapolis he’ll push for a spot in the A-final.

It’s a tough event to swim twice in one day.

If you have other chances to make the World Team, you might back away and save yourself for those other events.

If Josh Prenot doesn’t think he can get 2nd, he may skip it for that reason,

Chase’s breaststroke is always jaw-dropping to watch in the 400. He looks like he’s swimming downhill.

expect Bentz to be much faster, close to 4:10

Agree. He has big taper drops compared to Litherland and Kalisz, and he was terrific at NCAAs.

That battle for second should be pretty fun. I hope Prenot doesn’t scratch.

Does anybody know if this will be on tv? Or streamed anywhere?

It should be on USA swimming for prelims anyway and for finals, either USA stream or NBC since they just signed a contract with them

Slightly off topic, but Sjostrom’s success in the sprints after dropping the 200 free makes me wonder what Hagino could achieve if if he dropped the 400 IM and focused on the 1/2 back, 2 free, and 2 IM.

I definitely don’t think that would be smart since 400 IM has been his best event. If he drops anything I would say drop the backstrokes, I don’t think he has ever even medaled in a backstroke international race.

He may have a Pan Pacs medal or something from years ago… He does have a fairly elite backstroke, but when you’re in the conversation of who can touch that 4:03 gold standard, it’s probably hard to walk away from.

I think Prenot will take 2nd. I wish we could see Licon in this event, but I guess it isn’t likely.

I am not so sure Prenot will swim it.