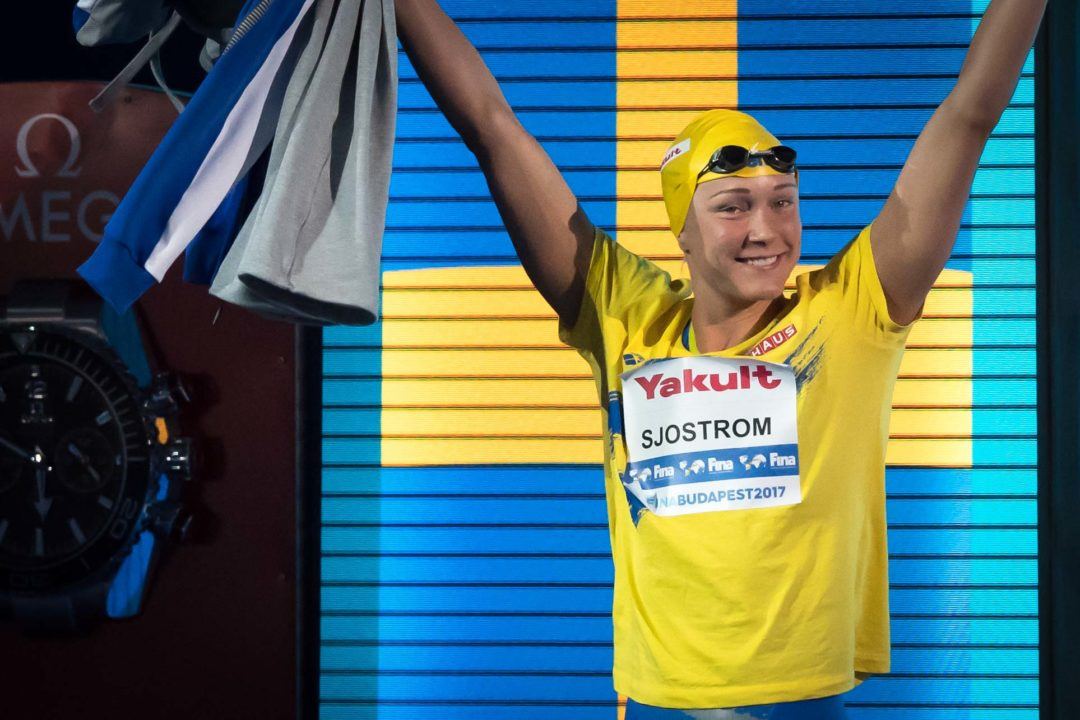 Sarah Sjostrom and Mireia Belmonte were tonight's golden girls in Eindhoven, each having earned a shiny new world record to close out the first cluster of this year's FINA World Cup Series. Archive photo via Mike Lewis/Ola Vista Photography

The Sjostrom Show has escalated to shockwave proportions.

Spain’s Mireia Belmonte became the first woman ever under 4:19 tonight in the short course 400 IM.

It was an electrifying finale to the first cluster of the 2017 FINA World Cup Series, with 2 national records falling this morning, followed by 2 monster world record marks biting the dust this evening. The bar continues to be raised by the likes of Sarah Sjostrom, Mireia Belmonte and Ranomi Kromowidjojo, while several impressive performances were sprinkled throughout the men’s side of the competition in Eindhoven as well.

Both world record-setting swims came off the women’s blocks, with Swedish superstar Sarah Sjostrom surprising a stacked 200m freestyle field with a new best-ever mark in that event. Sjostrom already held the previous world record with the 1:50.78 from the Short Course World Championships in 2014, but the 23-year-old had been opting out of at least the long course version of the race as of late.

That was not the case tonight, however, as Sjostrom fired off a huge 1:50.43 to hack .35 off of her old record to take gold, further establishing herself as the world’s premier female sprinter, both long course and short course. You can read about her world record in more detail here.

The 200m butterfly gold medalist from Rio, Mireia Belmonte of Spain, made her presence known in a big way here in Eindhoven by clocking the 2nd world record of the night. Sitting in 2nd place through the first half of the grueling 400m IM event, Belmonte found another gear and absolutely crushed a back half to surge to the lead and ultimately win over Hungary’s Katinka Hosszu by nearly 6 seconds. Belmonte’s final time of 4:18.94 represents the first time a woman’s been under the 4:19 mark ever in the 400 IM in short course meters. See Belmonte’s splits and additional analysis here.

Right before the women’s 200m freestyle the crowd was treated to an exceptionally close 50m butterfly battle between Sjostrom and Dutch world record holder Ranomi Kromowidjojo. Kromo, who is the newly-minted WR holder in the 50m freestyle event with a time of 22.93 from earlier in this cluster, was able to beat the flying Swede tonight by the slimmest of margins. Touching in 24.54, Kromo was able to get her hand on the wall first and establish a new 50 fly Dutch national record for her efforts.

Right behind was Sjostrom, who touched only .01 slower in a mark of 24.55 for silver. She and Kromo were the only 2 to clock times under the 25 second threshold, with Maaike De Waard touching in 25.46 and Cate Campbell finishing in 4th in 25.77. For C1, tonight’s race represents the first time the Aussie has been under 26 seconds.

C1’s green and gold teammate, Emily Seebohm, topped the field in the women’s 100m backstroke, finishing in 56.00. America’s Olivia Smoliga had a nice time drop from her morning swim of 57.03 to earn silver in 56.58. Somewhat surprisingly, Iron Lady Katinka Hosszu was off her usual form and settled for bronze in 58.11, well-off her morning effort of 56.95.

A 3rd world record was threatened by Jamaica’s Alia Atkinson, as yesterday’s 100m breaststroke winner doubled up with a victory in the splash n’ dash of the same discipline tonight. Clocking a time of 28.84, Atkinson was just .2 off of her 50m breast WR mark of 28.64 set at the Tokyo stop of last year’s World Cup Series.  Lithuanian teen Ruta Meilutyte was 2nd in 29.57 as the only other swimmer under the 30 second threshold in tonight’s race.

South African Chad Le Clos kicked the men’s events off with a quick time in the 100m freestyle event. The newly-minted 200m butterfly world champion touched in 45.96 to come within striking distance of his own South African national record of 45.75 set in Berlin earlier this month.

Russia’s Vlad Morozov, who won the 100m IM and 50m freestyle last night in Eindhoven, collected silver in 46.14, while Italian Marco Orsi got on the board in bronze with a 100m free time of 46.70. Olympic champion in this event, Kyle Chalmers, touched in 47.24 for 5th, a solid result in his first international competition since returning from a medical procedure to treat his SVT heart condition.

Le Clos wasn’t done after the free, as later in the session he cranked out a winning time of 49.09 in the 100m butterfly race. The 25-year-old holds the world record in this event in a time of 48.08 from Windsor last December. Also in tonight’s 1fly event was Italy’s Matteo Rivolta, who took silver in 49.54. That shaved .01 off of the Italian national record he set in Netanya.

This morning’s 200m breaststroke field saw local man Arno Kamminga clock a time of 2:04.74 to claim the 2nd seed and earn himself a new Dutch national record in the process. The 21-year-old, however, couldn’t duplicate the effort this evening, as Kamminga finished in a final time of 2:05.50 for 6th place.

Winning the 200m breast tonight was Russia’s Kirill Prigoda, the 100m bronze medalist from Budapest. Prigoda stopped the clock tonight in 2:02.15 to hold off German Marco Koch who finished in 2:02.62. Right behind him was another Russian, Anton Chupkov, who earned the only other sub-2:03 time of the field for bronze in 2:02.83.

Belarusian swimmer Pavel Sankovich blasted a new national record in the men’s 50m backstroke, taking the gold in 22.84, while Germany’s Philip Heintz earned his own golden hardware in the 200m IM in 1:53.23.

The final men’s event, the 1500m freestyle, was a duel through the first 1000 meters, with Italy’s Gabriele Detti holding off an ever-creeping Norwegian in Henrik Christiansen. Christiansen rode Detti’s hip steadily through the majority of the race, then took over the reins to clock consist 28-point 50s for the last 300+m. Christiansen finished in 14:26.48 for the hard-earned win, while Detti clocked 14:28.43 for 2nd place.

I’m a little bit confused as to which event kromo beat Sjostrom in. Was it the 50 fly?

Think so, but sure would help if the article stated it.

When in doubt Look for reference points . C1 under 26 for the first time means its fly not free.