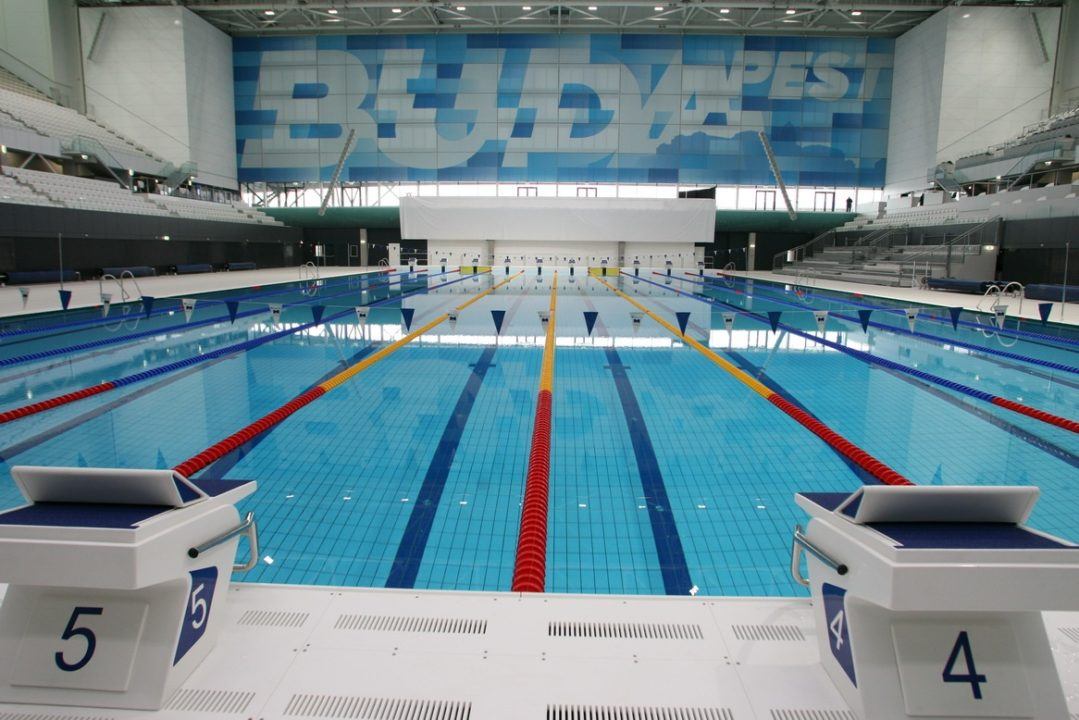 The FINA 2017 World Championships pool has been named Danube Arena, organizers announced in a ceremony earlier this year. The... Current photo via BP 2017 Organizing Comittee

The FINA 2017 World Championships pool has been named Danube Arena, organizers announced in a ceremony earlier this year. The new complex will feature state of the art facilities that highlight Budapest’s breathtaking scenery.

The championships have given Budapest the opportunity to build a modern swimming complex for the benefit of the Hungarian swimmers and water polo players, as well as divers. The facilities built will cater to the demands of both athletes and spectators, featuring high diving into a giant pool on the riverside, synchro pools in the middle of a lake and a new indoor swimming stadium.

The pool will be located on the bank of the Danube, holding up to 8,000 seats for fans. In addition, there will be a fan zone the other side of an island with giant screens allowing a larger audience to watch the action.

The diving complex is located at just a walk or boat ride away from the swimming pool, sitting opposite of the Parliament building rising from the lower embankment. Further, water polo games will be held on the beautiful Margaret Island.

Synchro competition will be held in two temporary pools surrounded by an artificial lake. The complex will allow  to 5,000 spectators to watch breathtaking performances surrounded by two lakes.

Open water races will be held in Lake Balaton, approximately 120 km from Budapest. Although this may make organization difficult for some teams, it is the first time in the history of FINA World Championships that a championship will involve a co-host city.

Operation Reclaim The Danube. Sean says it is ok now that a certain a european person did not do bad things .

1. On the picture you can see “Varosliget” (City Park) next to Heros’ Square.
2. Margaret Island is actually an island on the river Danube that will host the water polo games:
https://www.google.co.uk/search?q=margitsziget&source=lnms&tbm=isch&sa=X&sqi=2&ved=0ahUKEwjS-Nz56J3TAhWqKcAKHS2tDkgQ_AUIBigB&biw=1641&bih=842#imgrc=zA_PL7c_mx4uAM:&spf=191
3. Danube Arena is a standalone new swimming pool complex at a third location on the bang of the same river:
https://www.google.co.uk/search?q=margitsziget&source=lnms&tbm=isch&sa=X&sqi=2&ved=0ahUKEwjS-Nz56J3TAhWqKcAKHS2tDkgQ_AUIBigB&biw=1641&bih=842#tbm=isch&q=duna+ar%C3%A9na&imgrc=SLpi_OdjOXb1UM:&spf=388

Thanks for catching these things, Riez!

Thanks for the catch, Swimmer! I updated the article.