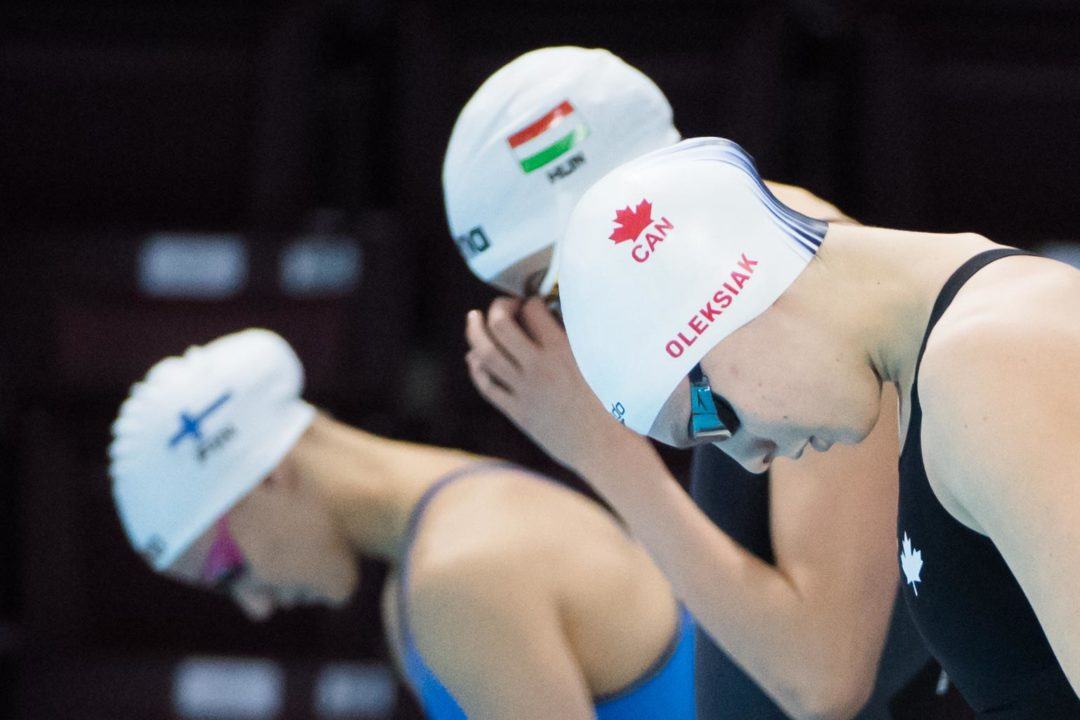 Penny Oleksiak will have her first opportunity to book a ticket to Budapest tonight in the women's 100 free final. Archive photo via Mike Lewis/Ola Vista Photography

Spots for Canada’s World Championship team are up for grabs again tonight, with four events slated for the evening session.

Starting us off will be the women’s 100 freestyle, where Penny Oleksiak will look to qualify for her first LC World Championship team after winning Olympic gold last summer. Oleksiak led the prelims in a time of 54.17. Provided the field is fast enough, the top finishers in the race will qualify for the 400 free relay. In order for that to happen, the top-four need to average about 54.58. This morning the add-up from the top-four were under the cut by less than a tenth. The individual qualification standard sits at 54.93. All eight swimmers in the final have a realistic chance of qualifying tonight.

In the men’s 100 free Yuri Kisil will look to become the second man to qualify for the team after getting under the ‘A’ standard this morning in 48.68. Markus Thormeyer will fight to do the same after clocking 49.62 in the prelims. The standard stands at 48.93.

In the women’s 100 breaststroke Rachel Nicol has a great chance to add her name to the roster after going under the standard this morning in 1:07.34, while Kierra Smith will look to add a second event in Budapest after winning the 200 last night.

The women’s 400 IM sets up to be a dog fight between four women tonight with only two spots available. Mary-Sophie Harvey, Sarah Darcel, Sydney Pickrem and Erika Seltenreich-Hodgson have all broken 4:40 in their career. The standard stands at 4:43.06, so the battle for spots in this race could very tight.

The 50 back will close out the session with Kylie Masse in search of another Canadian Record. After setting two yesterday in the 100, Masse was less than two tenths shy of her own 50 record this morning in 27.83. In the men’s race, Javier Acevedo will look to nail down his second backstroke win of the meet against top seed Tim Zeng.

Penny Oleksiak came home in a blazing 27.53 to run down early leader Sandrine Mainville to win in a time of 53.84, qualifying her for the World Championship team. Mainville held on for 2nd in 53.95, earning her an individual event in Budapest as well. Michelle Toro (54.14) and Chantal van Landeghem (54.16) were fast enough in 3rd and 4th to earn spots on the 400 free relay.

Kayla Sanchez, Rebecca Smith and Katerine Savard placed 5th, 6th and 7th, and have all qualified for Budapest via the 200 free last night. This gives Canada plenty of options for the prelim 400 free relay in Budapest.

UBC swept the podium, with Yuri Kisil leading the way in a time of 48.90 to get under the ‘A’ standard and qualify for the World Championships. It was a bit slower than his morning swim of 48.68, but gets him a spot on the team nonetheless.

Markus Thormeyer was just two tenths off the standard for 2nd in 49.13, a new personal best. He had the fastest back half of anyone in the field. Thormeyer will look to qualify in either the 200 back or 50 free later in the meet after narrow misses in the 100 and 200 free.

Carson Olafson rounded out the UBC sweep in 50.28, getting by CAMO’s Antoine Bernard-Lalonde by two tenths who was 4th.

Like Kisil, Rachel Nicol was a bit slower than the prelims tonight but still managed to qualify for the World Championship team in a time of 1:07.43, bettering the standard of 1:07.58.

Richard Funk delivered in the big moment, posting a lifetime best time of 1:00.03 to qualify for the World Championship team after a disappointing miss a year ago at the Olympic Trials. Funk was less than two tenths off of the Canadian Record of 59.85 held by Scott Dickens.

This one was a wild ride, as Island Swimming’s Sarah Darcel got out to an early lead and held that through 200m, until teammate Sydney Pickrem overtook her with a quick 1:16.2 breaststroke leg. Seemingly out of it from the start, Mary-Sophie Harvey stormed home with an incredible 1:01.6 last 100 to pass Darcel and almost Pickrem.

Pickrem touched 1st in 4:35.43, a lifetime best and the 3rd fastest time in the world this year. Harvey came in at 4:36.60, also a lifetime best time and the 5th best in the world. Despite being passed down the stretch, Darcel did nip her previous best as well to get 4th, and Erika Seltenreich-Hodgson was also under the ‘A’ standard for 4th in 4:41.47.

Harvey adds the 400 IM to her World Championship which also includes the 200 freestyle, while Pickrem earns a berth to the team after being DQed in the 200 breast heats yesterday.

Tristan Cote continued the momentum on the men’s side tonight, delivering a two second best time to qualify for Budapest in a time of 4:17.40. Cote was at the front of the race the whole time, holding off a hard charging Luke Reilly coming into the finish. Reilly erased a big deficit with a 57.65 freestyle leg, ultimately missing the standard by just over two tenths in 4:18.14.

After just one male qualifying for the team last night, they have gone 3-for-3 tonight with Kisil, Funk and Cote all qualifying.

Kylie Masse won her second title of the meet in a time of 27.71, just missing her national record of 27.67 set last year prior to the Olympics. Despite narrowly missing the record, she does move past Australia’s Emily Seebohm for the #1 spot in the world by one one-hundredth.

In a tight battle for 2nd the next five finishers all broke 29 seconds, led by UBC’s Ingrid Wilm in 28.40. Jade Hannah, just fifteen years-old, continues to swim incredibly well here taking 3rd in 28.60.

Tim Zeng of the Chena Swim Club followed up this mornings PB with another tonight to upset Javier Acevedo to win the 50 back in a time of 25.47. Acevedo came in at 25.65 for 2nd, and Edmonton Keyano’s Anders Klein won a close race for 3rd over Noah Choboter (26.26) in a time of 26.21.

Oleksiak pulls it in at the end again.

Impressive 1.03.17 for 15yo Mastromatteo in the 100br ‘B’ Final. Only slight negative observation is that he looks quite physically developed already, compared to say Martinenghi.

It’s getting crowded at the top ranks of women’s 100 free. 12 swimmers are under 54sec and 9 of them are within 0.3sec interval. And in a week some Americans may join this dense group as well.
It is hard to read what results of Canadian trials in sprint actually mean. Three of top four sprinters are quite experienced swimmers (25, 26 and 23 years old). They probably were at least rested for this meet. Will they improve their times in three months? Even if they do, then probably not significantly. That gives some idea where the Canadian 400 relay can be. Oleksiak looks at the same pace of preparation as a year ago, but if she is able… Read more »

Not sure how I feel about the Ruck speculation. If, say, spots had gone unfilled and others hasn’t delivered – I think they could justify her selection. But – Both relay squads are full and both have alternates in other events. Similarly to Britain, Canadian Swimming could just pick their favourites and save us all anticipating trials. This discretionary system just stinks of opening up corrupt selections.

There’s no way they could justify her selection with her 8th place finishes. I could see it if she consistently placed 5th, but not this. Think of how demoralizing that would be to other swimmers who performed well at Trials. Swim Canada will have to apply their discretionary selection process carefully if they don’t want open revolt. So far, I think the system has worked well. The addition of Taylor Ruck last year was a good decision given that she was so close to qualifying.

Last year she was also sick during the trials, and there are procedures in place to let someone on the team for relay support if an illness prevented them from performing their best. Haven’t heard anything about Taylor Ruck being sick this year yet. It’s sad to see.