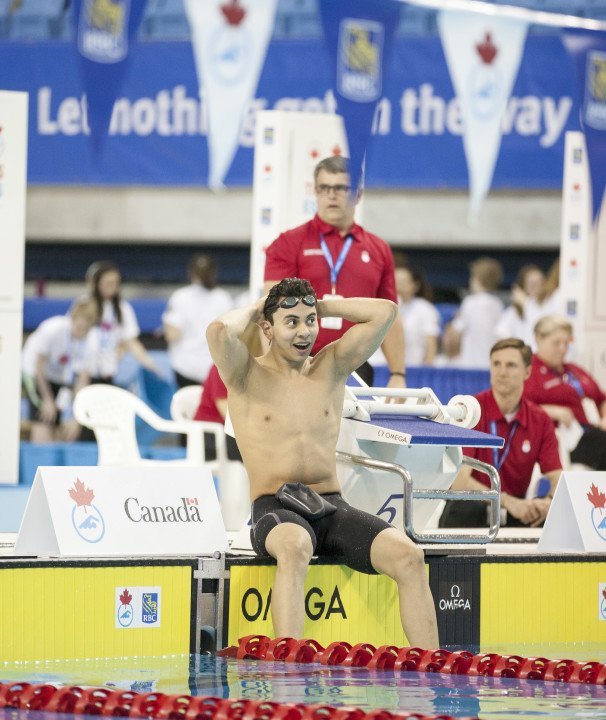 Javier Acevedo has scratched out of the men's 100 freestyle final tonight at Canadian World Trials. Archive photo via Chris Tanouye

There were a total of seven scratches after day 2 prelims in Victoria, with the most notable coming in the men’s 100 freestyle. Javier Acevedo posted the 6th best time among Canadians this morning in 50.53, but has opted to scratch the event. He remains in the A-final of the 50 back tonight, though it’s not a selection event. Acevedo has already qualified for the World Championships in the 100 back.

The decision to scratch this final may seem a bit puzzling, as the 100 free offers the opportunity for four swimmers to qualify for the World’s team (two individually, two in the relay). However, in order for that to happen, the top four swimmers would need to average a time of 48.91, which is not going to happen based off the results this morning. Acevedo’s best stands at 49.85 from the 2015 Canadian Trials.

Only two men cracked 50 seconds this morning in Yuri Kisil and Markus Thormeyer. Though the relay standard seems out of reach, Kisil was under the individual qualifying standard this morning and Thormeyer has a reasonable shot at it. If they both qualify for the team, Acevedo could realistically join those two on the relay in Budapest if another reasonable option qualifies in another event (each country is permitted an entry in each relay, and don’t need to qualify like they do for the Olympics).

After posting the 10th best time of the morning in 55.35, Alexia Zevnik has scratched out of the women’s 100 free B-final. Zevnik swam a personal best of 54.53 at the Olympic Trials last year to just miss qualifying for the team in 5th, so she was looking for a possible relay position but was slightly off the pace this morning. She still has the 200 back, 50 free and 200 IM on her schedule here in Victoria, though her two best chances of qualifying (she was 4th in the 100 back yesterday) are gone.

Along with Acevedo, Dominique Bouchard was the only other A-final scratch, as she moves out of the women’s 50 back. Bouchard was in an interesting situation last night, as she tied for 2nd in the 100 back but lost her spot on the World’s team to Hilary Caldwell who posted a faster time in the prelims. Bouchard will look to qualify in her strongest event, the 200 back, on Saturday.

Other scratches for tonight’s finals:

What time is Finals? Is there a live recap?