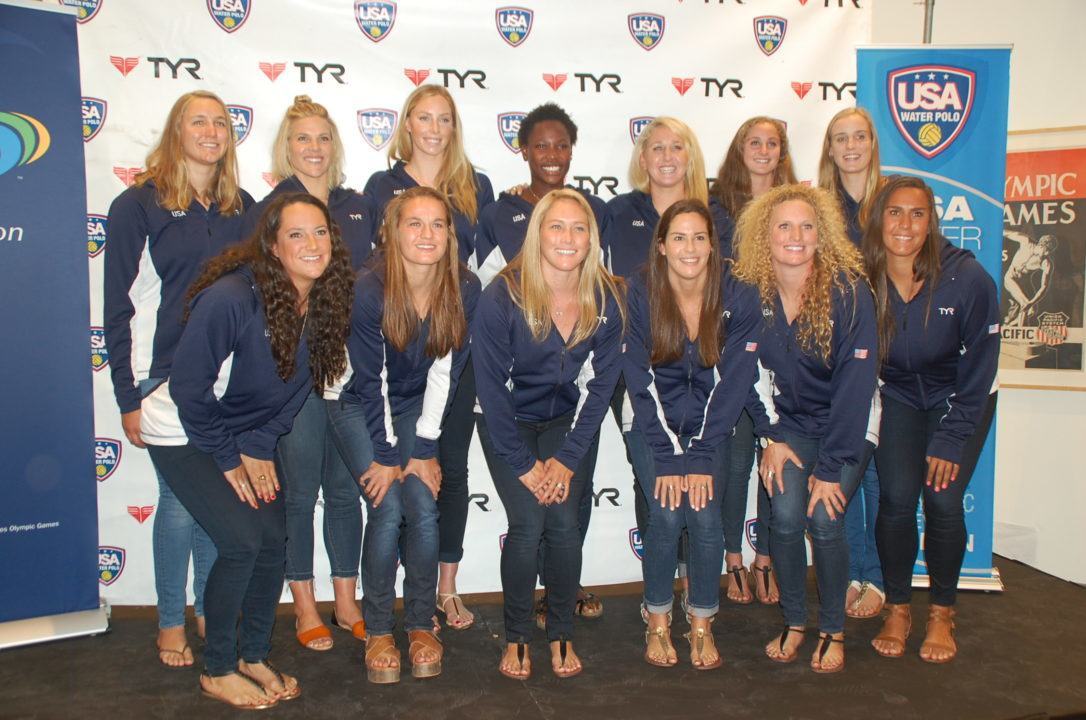 USA Water Polo announced the 13 players who will make up Team USA at the 2016 Olympic Games in Rio de Janeiro during a press conference at LA84 Foundation on Thursday. Current photo via Anne Lepesant

USA Water Polo announced the 13 players who will make up Team USA at the 2016 Olympic Games in Rio de Janeiro during a press conference at LA84 Foundation on Thursday. Following addresses from LA84 President and CEO Renata Simril and LA 2024 Vice Chair Janet Evans, Team USA head coach Adam Krikorian introduced each player, in order of their cap numbers.

This will be the second Olympic experience for four of the team members; Melissa Seidemann, Kami Craig, Courtney Mathewson, and team captain Maggie Steffens were all on the 2012 U.S. Olympic team that won the gold medal in London. Among the newcomers are sisters Aria and Makenzie Fischer, Sami Hill, Maddie Musselman, Rachel Fattal, KK Clark, Kiley Neushul, Kaleigh Gilchrist, and Ashleigh Johnson.

The United States women are currently the dominant team in world water polo and the heavy favorites to win gold in Rio. They are the reigning Olympic champions, World Cup champions, and World Championships champions, both at the senior level and at the U20 and U18 levels as well.

The Americans will have six test matches leading up to Rio. They head to the East Coast at the end of June to host the Hungarian national team in Miami, Florida and Greenwich, Connecticut. Then they will come back to the west coast for games against Russia in San Diego, Los Angeles and Palo Alto at the end of July.

Team USA will begin competition at the Olympic Games on August 9, 2016 against Spain.

USA Water Polo, Inc. is the national governing body for water polo in America, overseeing our United States Olympic program as well as 20 different championship events annually, such as Junior Olympics and Masters National Championships. With more than 40,000 members, USAWP is also the sanctioning authority for more than 500 Member Clubs and more than 400 tournaments nationwide. USAWP is committed to the development of the sport throughout the US. It fosters grass-roots expansion of the sport, providing a national system of affiliated clubs, certified coaches and officials.