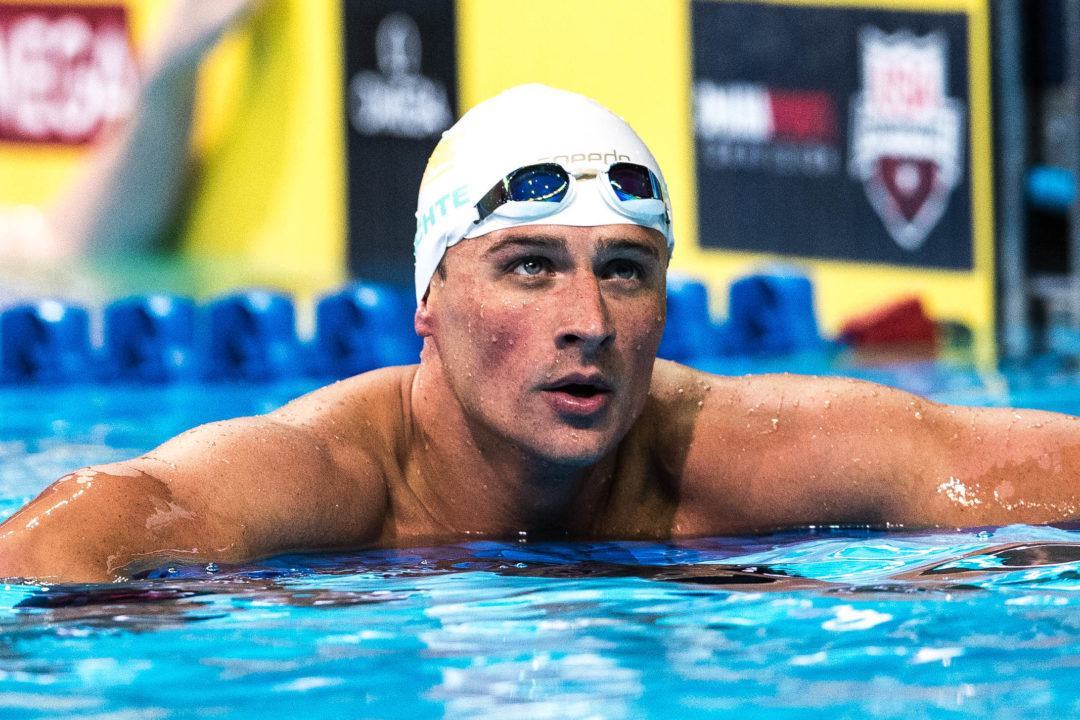 Now, Simone Manuel will look to pave her way onto the team with a strong 100m freestyle prelim swim this morning. Franklin is seeded second, Ledecky fourth, as they’ll try to set themselves up for another swim be it relay or individual.

Ryan Murphy proved earlier that he’s the man to beat in the backstroke events. If he wants to take the 200 back, he’s going to have to get past reigning Olympic gold medallist Tyler Clary who has yet to make the team.

In the absence of American record holder Rebecca Soni, a new wave of women’s breaststroke has swept the nation and with it brings Micah Lawrence. Lawrence took home a silver at last summer’s World Championships in the 200, but will have to hold off plenty of young talent if she wants to keep her title as the best 200 breaststroker in the States.

The men’s 200m IM is arguably the most anticipated event of these trials pinning Ryan Lochte against Michael Phelps. The two have have been close to the world record multiple times since Lochte set in, and will have to fight tooth and nail to for the win.

Abbey Weitzeil led the way in the heats of the women’s 100m freestyle this morning, taking the win in heat five with a personal best time of 53.58. That time put Weitzeil ahead of American record holder Amanda Weir.

Weir won the final heat of the 100m freestyle with a 53.76, just slightly slower than Weitzeil’s time. In the process she took down Simone Manuel.

Manuel was second in the final heat in 5384 to take fourth overall.

Vollmer ended up distancing herself from the two with a 53.80 performance. Worrell wasn’t that far behind however, rocking a swift 54.02 at the touch to take fifth overall.

Reigning Olympic trials champion Jessica Hardy finished well back in 59th with a time of 56.80, almost three seconds slower than what she went to win trials back in 2012.

Jacob Pebley of Cal made a statement this morning that he was in the mix to win the 200m backstroke tomorrow night after dropping a smooth 1:56.39 in prelims.

Pebley was out quick and came back strong and smooth before turning off the jets down the final stretch. His time leads the way to tonight’s semifinals ahead of reigning Olympic gold medallist Tyler Clary.

Clary hasn’t had a great meet thus far, scratching from the 400m IM final, missing a relay spot in the 200m freestyle, and missing the final of the 200m butterfly.

The 200m backstroke might be has last chance to qualify for the team, and Clary isn’t wasting it. He was a 1:56.85 this morning to take the second seed behind Pebley.

Ryan Murphy swam what appeared to be an easy 200m backstroke, throwing down a 1:57.35 which easily qualifies him for the semifinals. In the lane beside him Michael Taylor was churning away to almost go par with the 100m backstroke champion, clocking in a 1:57.92.

Top seed Micah Lawerence led the way this morning in the heats of the 200m breaststroke. Coming home strong Lawrence dropped a 2:26.27 to be one of two swimmers under the 2:27 mark.

Bethany Galat of Texas A&M dominated her heat from an outside lane, coming back strong on 100m breaststroke champion Lilly King, Laura Sogar, and Molly Hannis. Galat touched in for a swift 2:26.72.

Ryan Lochte and Michael Phelps are set up for one more showdown. The dynamic duo took the top two seeds in prelims and look to lead things heading into tonight’s semifinals.

Both Lochte and Phelps demonstrated a strong 150-meters before shutting things down towards the end of the race. Lochte was a 1:58.05 to take the top seed.

After missing the team in the 400m IM earlier in the meet, Lochte claimed that a “pulled groin” injury had occurred effecting his breaststroke. Today, Lochte showed no signs of pain during or after his race on the breaststroke leg.

Splitting a swift 34.24, Lochte looked smooth on his breaststroke. From SwimSwam’s point of view, it appeared as though Lochte had somewhat altered his kick, shortening it and keeping it tighter.

Jay Litherland, who ran down Lochte to qualify for the team in the 400m IM earlier this meet, qualified for tonight’s semifinal sixth in 2:00.35.

Both Will Licon and Chase Kalisz no-showed their heats this morning.

I love USA Swimming!
The Trials (to me!) are almost better than the Games, because of the mass of old and new of America’s best swimmer so coming together with everything on the line. Go USA!

No disrespect to the other ladies – But I would love to see Amanda Weir get an individual swim in Rio. My heart wants Weir & Neal – My head says Weitzeil & Manuel.

I know he is proud he has handed the baton off to some amazing future backstrokers for USA for 2016. I will miss the years of dominance and that ever-present smile and sense of good humor in RIO.

I would not count out a highly focused comeback in the next quad – which I would wish for.

Best of everything Matt!

By the way happy birthday to Michael Phelps who turns 31 today.

My take away is good or bad most time are amazingly slow and not looking good for olympics unless really bad in tapering cycle.

What do you think would be phelps best schedule? Especially when he will be 100 percent fresh then compared to now?

It’s not popular to say that on swimswam but I don’t think he should swim the 200 fly.
My heart says “swim it, you have a revenge to take and that’s your baby event” but my brain says “drop that event MP, you are too old to endure 3 hard rounds of such a grueling event and it could cost you much for the rest of the week”.

About MP olympic schedule, the problem is that we know anything more about the state of his freestyle.
So will he swim both relays? No idea.
I will not change my longtime MP schedule hopes for Rio. 200 IM/100 fly and the 3 relays are well enough.

We don’t know anything about the state of his freestyle because he hides it since the summer of 2014. Last summer no freestyle fully tapered. And this week no freestyle either. I’m not too worried. I can’t believe he has a specific problem of freestyle. Anyway his coach is not stupid. He’s also the US men’s team coach and if he sees at the training camps that MP freestyle is not where it should be, he will not take the risk of putting him in a relay final.

I think he chose not to swim freestyle this meet because he isn’t fully tapered and doesn’t want everybody to count him out yet because of an untested meet. I think he needs a much larger taper now that he is so much older and I think he’s saving it for rio. Based on last nights time and what he went In August I refuse to believe that just after anoter year of great training that he has deteriorated so much. He’s going to peak in rio and hopefully go 3 for 3 individual gold and maybe swim the free relays and hopefully go one last best time before he hangs up the cap and goggles for good.

I think he chose not to swim freestyle this meet because he isn’t fully tapered and doesn’t want everybody to count him out yet because of an untested meet. I think he needs a much larger taper now that he is so much older and I think he’s saving it for rio. Based on last nights time and what he went In August I refuse to believe that just after anoter year of great training that he has deteriorated so much. He’s going to peak in rio and hopefully go 3 for 3 individual gold and maybe swim the free relays and hopefully go one last best time before he hangs up the cap and goggles for good.

I have a strong feeling that Phelps won’t swim 800 free relay.
He might swim 400 free relay
N rest 4 events we know are a sure lock.
That’s my prediction !

I personally hope that he does all three individual events and leave the relays for the kids and shields can do the medley for butterfly leg.

I kinda love when you say “Take a revenge.” But as an FYI, it would be either “you want revenge” or “you want to get revenge.”

And the more I type it, the weirder that word seems.

Why some people want to see Licon and Prenot in the 200 IM?
Both guys have their best event tonight and it’s their only chance of qualification.
Why wasting energy in the morning to swim an event in which, at best, you can take the 3rd place 2 or 3 seconds behind MP and Lochte?
Very smart schedule stategy. It’s not so common this week. 😆

For the rest, looks like Abbey is ready for the performance I hope. Go out hard Abbey! Take your mind off! And see what happens!
It’s likely to see Kelsi Worrell scratch the semis tonight to focus on her 200 fly final. I don’t see the interest of that morning… Read more »

Go Amanda….lol gotta cheer for a Georgia resident and Swim Across America supporter!