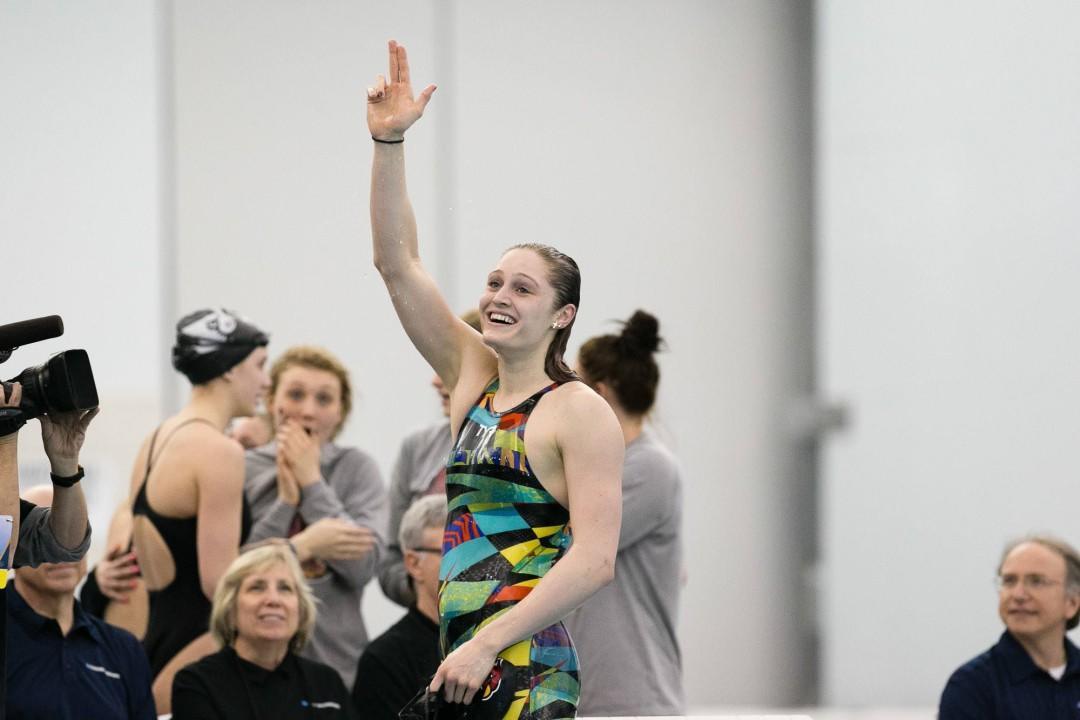 After becoming the best 50 and 100 flyer in history on Friday, Kelsi Worrell erased any doubt that she's the best all-around flyer in the country, winning the 200 fly with a two-second drop. Current photo via Tim Binning/TheSwimPictures.com

It’s been a meteoric rise for Louisville junior Kelsi Worrell, but the Cardinal officially reached the pinnacle of college swimming this week.

Not only did Worrell destroy the American, NCAA and US Open records in the 100 fly on day 2, Worrell stunned the field with a blowout 200 fly win on day 3.

Worrell was the top underclassman in the event last year, but was still somewhat of a wild card. New to the event, Worrell didn’t swim it much at all this year, focusing on the 100 free at ACCs instead.

But in hindsight, that might have just left Worrell with more time to drop in one single burst. Her race tonight was her lifetime-best by a whopping 2.5 seconds. A 1:53.6 last year, Worrell skipped the 1:52s entirely and nearly did the same with the 1:51s. Her time of 1:51.11 is the fourth-fastest 200 fly ever swum, behind just two swims each from American record-holder Elaine Breeden and Hungarian world champ Katinka Hosszu.

Worrell admitted yesterday that she was sick with mono last summer, and still finished top 6 in both butterfly races. Seeming to only get better with each passing meet, Worrell is starting to look like a potential breakout star for the US internationally, and she’ll get her first chance to represent the United States at this summer’s Pan American Games in Toronto.

So cool to have two ACC teams in the top 6 at NCAAs. It was way too long that a totally dominant ACC team like Virginia struggled to make the top ten at NCAAs. I think the new normal is that the top ACC teams will finish in the top 5 at NCAAs – especially with the continuing rise of NCSU and I think UNC will improve.

Just to add a bit of information, Worrell made a nice 47.31 in free relay prelims.