2015 Women’s Big 12 Championship Fan Guide: Texas in a class of their own 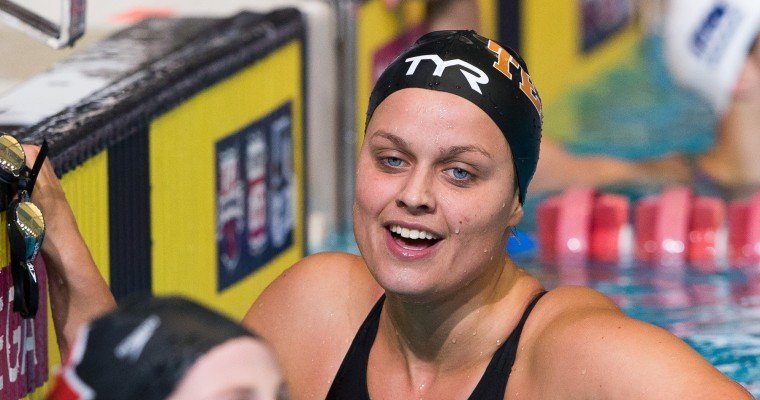 Sarah Denninghoff and the Texas Longhorns are runaway favorites, but there's still plenty of action to be found this weekend down in Austin. Current photo via Tim Binning/TheSwimPictures.com

There’s no doubt about it: Texas will run away with the Big 12 title again.  However, the rest of the conference has continued to make some strides since the departure of Texas A&M and Missouri, with a big uptick in the number of non-Longhorns in the top eight (and even the top three) of a lot of these events.

Discounting all of that, there’s a pretty good race for second here.  Kansas was the runner-up a year ago, and returns a lot of their top talent (including Chelsie Miller, who is in good position for a three-pack of top three individual finishes this week).  TCU, meanwhile, struck gold with a couple freshmen, particularly Devin Newton and Emily Gibson.  West Virginia didn’t lose much from last year’s team, and Iowa State might be the deepest of this group.

Iowa State – Karyl Clarete (sophomore distance freesyler), Marissa Engel (junior backstroker), Amanda Paulson (senior sprint freestyler), Kasey Roberts (freshman breaststroker) – Freshman Kasey Roberts has been a big boost for the Cyclones in her opening campaign, arriving just in time given the graduation of Imelda Wistey, a top-three conference breaststroker.  If they get some good swims from their butterfly group, this team can challenge the Jayhawks for the second place team trophy.

Kansas – Chelsie Miller (junior distance/fly/IM’er), Bryce Hinde (junior breaststroker), Yulduz Kuchikarova (sophomore backstroker) – Kansas was propelled to a second place finish a year ago behind a good group of seniors, but plenty of high-scorers return, headlined by Miller, Hinde, and Kuchikarova.  All three are ranked in the top six within the conference in at least two individual events.

Texas – Madison Cox (sophomore IM’er), Gretchen Jaques (senior sprinter/breaststroker/butterflier/IM’er), Kelsey Leneave (senior butterflyer), Sarah Denninghoff (senior backstroker/freestyler) – Once again, this is Texas’ meet in a runaway.  The Longhorns will have their sights on NCAA’s, where they’re looking for their first top five finish since 2009.

West Virginia – Jamiee Gillmore (junior sprint freestyler), Julie Ogden (senior butterflier), Emma Skelley (sophomore distance freestyler), Jenelle Zee (senior breaststroker) – the Mountaineers were at the bottom looking up last year, but that was a really young team that only lost one of its core pieces.  Skelley should score big points in the distance events, and Zee has already been faster this season than she was at Big XII’s last year.

500 Freestyle – The first individual event of the meet is a Longhorn showdown between last year’s first and second place finishers here: Kelsey Leneave and Kaitlin Pawlowicz.  Leneave ran away with this one last year, but Pawlowicz is already under last year’s winning time, and nearly four seconds faster than her best time as a junior.  Both women are already probably safely into NCAA’s, so whatever we see here, we should expect more from these ladies next month.

100 Breaststroke – Barring a DQ or a downright terrible [or–on the other end–amazing] swim, Gretchen Jaques is going to win this race.  There’s an intriguing battle for second, however.  Jordan Surhoff has a bit of an edge based on her performances so far this season, but Skylar Smith and five other women are bunched between 1:02.19 and 1:02.55 (including two Cyclones, a Jawhawk, and a Mountaineer).

100 Freestyle – This one has serious implications for Longhorn relays, with Texas seeded 1-4, included three women between 49.90 and 49.99 (Shelby Webber, Mimi Schneider, and Brynne Wong).  Gretchen Jaques isn’t swimming the event, but she is the only returning member from last season’s Big XII or NCAA relay, and given her ability to dip under 49 seconds, it’s assumed she’ll probably get a spot.  Sarah Denninghoff and Kelsey Leneave have also earned spots on some of the sprint free relays in meets this season.  That leaves at least one spot up for grabs, and depending how they swim

With no real challenger for the second year in a row now that Texas A&M and Missouri have moved to the SEC, the Longhorns can essentially treat this as an intersquad meet.  Overall, we see this one going in the same order it did last year.  Kansas, Iowa State, and TCU all have a fair shot at 2nd, but the Jayhawks are still the favorite with more top-end talent.  Keep an eye on TCU… they have the best young talent in the field that’s not going to school in Austin.