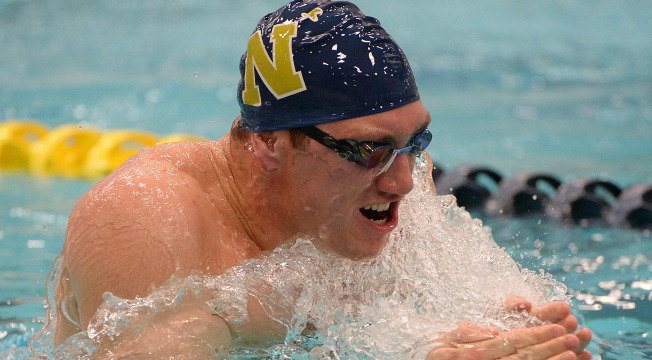 Navy loaded up the finals on Day Two but big swims came from a variety of teams at the 2015 Patriot League championships. Archive photo via Phil Hoffmann

The first individual swimming events took place this morning and one thing was clear from the outset: Lehigh, Bucknell, Boston University, and Colgate aren’t fooling around. While Navy impressed in the usual manner, there was a lot of jockeying for positioning among the players at the next level. In the men’s meet, Army still looks strong at number two, but BU is really challenging the Black Knights. Bucknell is having a huge meet on the women’s side and seems to have cut Navy’s lead considerably. The Midshipmen’s deep bench will help them out in relays, though, so we won’t expect any dethroning to take place tonight but it still makes for an exciting meet.

BU’s Stephanie Nasson (4:50.75) led the qualifiers in the women’s meet with a strong morning swim. Joining her will be Rachael Dudley and Jenny Smith of Navy, Colgate’s Morgan Cohara, Sabrina Mortell and Bridget Ritter from Army, Dani Potis of Bucknell, and Lehigh’s Meghan Thompson. It took a 4:58.49 to make the A final.

The Midshipmen and the Bison locked up the championship final for the men’s 500 free. Navy’s men qualified 1-2-3-4-5 behind Thomas Duvall’s “B” cut of 4:19.06. He will be surrounded by teammates Alex Nickell, Riley Mita, Jonathan Debaugh, and Noah Martin in tonight’s final. Also qualified are Louis Behnen, Denver Freeman, and Sam Rutan of Bucknell. Rutan’s 4:29.91 was the cutoff for the A final.

The swim of the morning belonged to Lehigh’s Danny Bennett, who dropped 13 seconds to make the B final with 4:32.60.

Charlotte Meyer of Navy was the top qualifier in the women’s 200 IM with 2:01.90. Diana Hanson from Bucknell, Kaitlin O’Reilly of Navy, Bucknell’s Ashley Henderson, Ellen Bradford of Navy, Bucknell’s Amber McDonnell, Lehigh’s Kelly Carroll, and Jess Burkett (2:05.31) of Army will round out the A final.

Lehigh’s Kaitlyn Ruffin led the field qualifying for the A final of the 50 free with a nice drop for 23.06. Molly Mucciarone of Army was second, followed by Navy’s Maddie Thompson and Kenzie Margroum, Sami Wary of Colgate, Carolyn Koch of Lehigh, Army’s Hailey Phillips, and Brianna Bilunas of Navy, whose 23.56 marked the cutoff point.

Navy’s Dain Bomberger was the fastest men’s qualifier at 20.23. Jamal Willis from Lehigh, Chris Szekely of Army, BU’s Andy Vazquez, Lehigh’s Justin White and Zach Tieke, Andrew Hacker of Colgate, and Steven Grune of Bucknell also made the A final. Freshman Tieke of Lehigh dropped 9/10 from his seed time to attain the A final, and Hacker of Colate dropped 8/10. It took 20.68 to make it into tonight’s championship final.