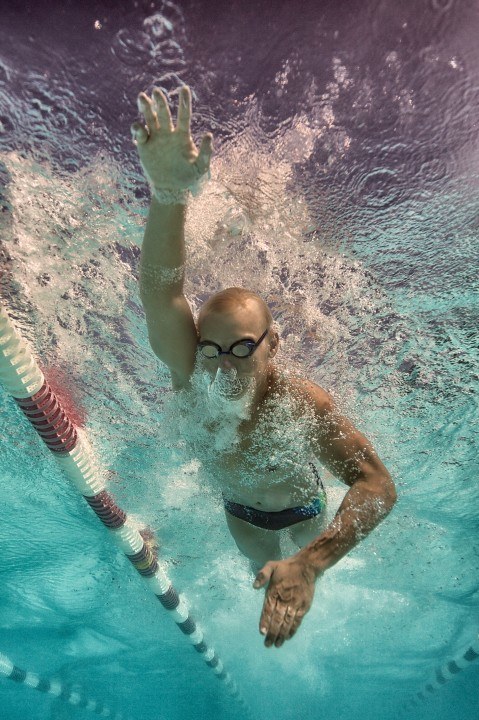 Andrew Seliskar will look for twin titles tonight in the 400 IM and 50 fly. Archive photo via rafael domeyko, rafaeldomeyko.com

Night 3 of the NCSA Junior Nationals will see a couple of big-name juniors go for dual individual titles. Headlining is U.S. Pan Pacs team member Andrew Seliskar, who holds the top seeds in the 400 IM and 50 fly after some very solid morning swims. Seliskar is set to tackle both events again in the long course pool tonight, hoping to translate his recent 3:37 short course 400 IM to an equivalent long course time and turning the 50 fly from down-and-back race to a pure, long course drag race.

On the girls’ side, US Short Course World Champs team member Katie Drabot has a shot at two wins. Drabot is the top qualifier in the 200 free, but will have a solid race with Roadrunner’s Stanzi Moseley, and Saint Andrews’ Megan Moroney. Drabot will also swim the 400 IM, where she’s the third seed behind top qualifier Emily Barksdale.

Other notable top seeds: USC commit Carsten Vissering is the top 50 breaststroker on the boys side, with New Trier’s Ingrid Wall leading the girls. Alexandra Preiss of the Aquajets of Minnesota is the top seed in the girls 50 fly, and Knox Auerbach of Dynamo leads the boys 200 free.

Keep refreshing this page for live, event-by-event updates of all the action in Orlando tonight.

17-year-old Katie Drabot out of Ozaukee Aquatics in Wisconsin won the first event on Thursday night, going 2:00.02 to take the 200 free. That’s not a best time for Drabot, who has been as fast as 1:58.7 before, but it was still plenty enough to crush the field at NCSA’s.

Second-seeded Stanzi Moseley of Roadrunner was a scratch out the final; she was the most likely candidate to push Drabot for the win. Instead, second went to Megan Moroney, a home-grown Florida talent from Saint Andrew’s. Moroney, a Virginia commit, went 2:01.45, about six tenths off her best.

Genevieve Pfeifer was 2:04.55 to just touch out Caroline McTaggart (2:04.71) for sixth, and Poseidon’s Sydney Pesetti closed out the A final in 2:06.59. The B final gave us the fourth-fastest long course time of the day, with Sydney Lofquist going 2:02.80 to take 9th overall.

The second seed after this morning’s short course prelims, Ohio state champ Grant House took over the final, going 1:50.79 to crack his personal best and take home the win. House’s previous best time was a 1:51.1 from last year’s YMCA Nationals.

NCAP’s Matthew Hirschberger, who has been on a record tear this week in the longer freestyle races, moved up to third, smashing his own personal best by well over a second with a 1:51.23. Machine’s James Murphy was just behind in 1:52.01, and top prelims qualifier Knox Auerbach fell back to fourth in 1:52.22 for Dynamo.

While the race this morning was between the younger swimmers, Aquajets 17-year-old Olivia Anderson roared by the field in finals to take the win in 31.81. That beat out 14-year-old NAG record-breaker Alexis Wenger (32.20) and top qualifier Ingrid Wall of New Trier (32.36). Anderson is slated to swim for the Texas Longhorns next season.

Riley Scott, a USC commit out of the Marin Pirates, went 32.85 for fifth, and Madleine Vonderhaar joined her under 33 with a 32.95.

York’s Jacqueline Clabeaux (33.35) and Southwest Aquatics’ Katherine Wells (33.65) rounded out the A final.

9th went to Shoreview (WI)’s Rachel Munson at 32.46, the fourth-best time of the night.

A spirited 400 IM battle ultimately left Ozaukee’s Katie Drabot with her second win of the night. Drabot charged out to a lead with big fly (1:04.8) and back (1:15.7) splits, but Long Island Aquatic Club’s Margaret Aroesty blasted past her on breaststroke with a giant 1:18.7 split.

That left Drabot about two seconds behind and in full run-down mode, but the 17-year-old high school junior had plenty of closing burst to take back the lead. Her 1:04.3 free split beat the 15-year-old Aroesty by about two seconds, and Drabot ultimately took the win 4:47.56 to 4:47.89.

Seeking two titles of his own to match Drabot for tonight, Nation’s Capital 18-year-old Andrew Seliskar went 4:16.51 to crush the 400 IM field. That’s just a half-second off a lifetime-best for the U.S. National Teamer and is one of the faster times we’ve seen in the world in this young year.

Seliskar left the field in his dust, winning the event by about 8 seconds. He’ll be back to swim the 50 fly shortly.

The closest race of the night was the girls 50 fly, where a one-length showdown between All Star’s Caroline McTaggart and Chattahoochee Gold’s Lauren Case came down to just two hundredths. At the wall it was McTaggart who took the win in 27.12, with Case second at 27.14.

Andrew Seliskar completed his double on the day with a 23.97 to win the boys 50 fly. Swimming a time that sounds more like a freestyle swim than a butterfly one, Seliskar once again blew out the field, using his big underwater kicking to take home the title.

Second was his NCAP teammate James Jones at 24.73. While Seliskar is a monster across nearly every distance, Jones is one of the top sprint specialists in high school swimming right now as a junior.

Huntsville’s Zach Harting, coming off the 400 IM just like Seliskar, took bronze in 24.98, just ahead of Knox Auerbach, another busy swimmer in his second A final of the night. Auerbach was 25.12.

Meanwhile in the B heat, Dynamo’s Cash Deloache went 25.11 to take 9th overall.

Does anyone know how tall Seliskar is? He doesn’t seem to have a Phelpsian build…looks more like he’s 5-11, 6-0 and probably closer to Lochte in terms of physique.

Watching his 400IM its incredible how much distance per stroke Seliskar gets despite his build. In that way, he reminds of of Erik Vendt in his prime. Seliskar’s endurance capacity may never match Vendt, but his athleticism and underwaters are much better. Very excited to see what he does in 2016.

Thanks for the news.
I didn’t see that NAG record happen at all.
I should have been. Because he swam 1.38.96 last month in yards. So it was a good sign of form.
Congrats to him. His PB in LCM before this week was 1.55.91 last July.

Swimming that level in the 50 fly and 400im back to back is ridiculous. Thats Ryan Lochte/Michael Phelps range