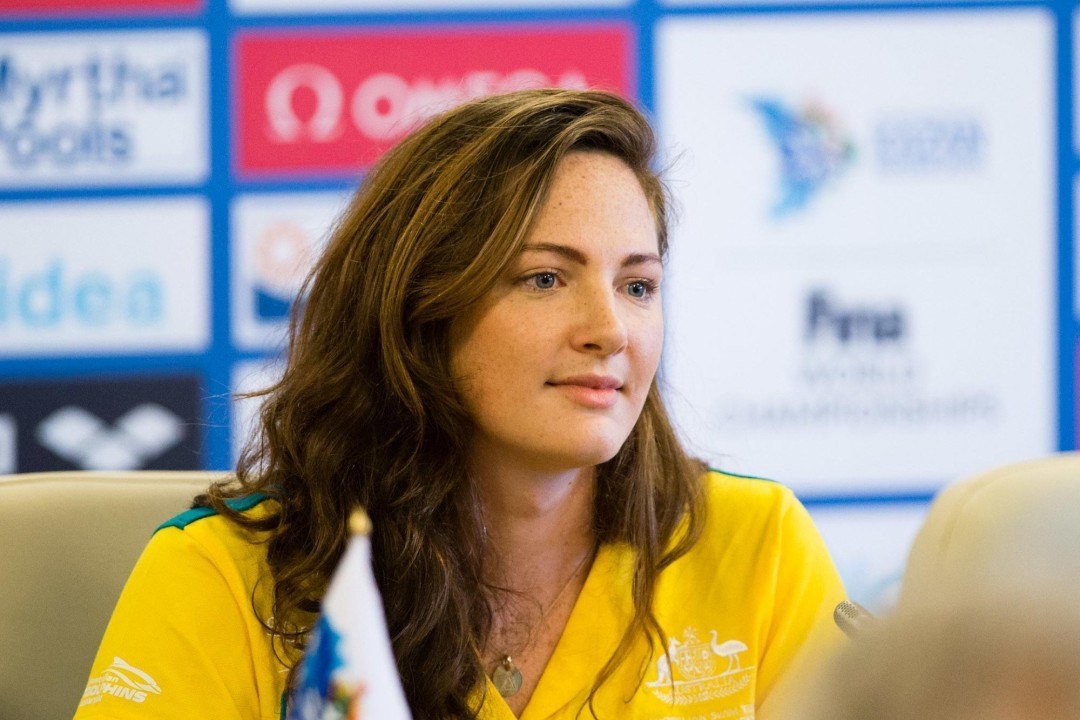 Cate Campbell will be one of many talented sprinters to watch this morning in the Women's 100 Free. Current photo via Tim Binning/TheSwimPictures.com

Day 5 of the FINA World Championships will kick off with the women’s 100 free, and though we are used to seeing the Dutch dominate this event, it is defending World Champion  Cate Campbell from Australia who will be the one to beat this time around. Campbell enters the meet only slightly faster than  Sarah Sjostrom from Sweden, and Cate’s sister, Bronte Campbell, will also be in the picture, and considering that she split a 51.77 on the 4×100 Free Relay earlier this week, there is no reason to count her out in this event. The Netherlands’ Femke Heemskerk has also demonstrated that she’s ready to go at these Championships with her 51.99 anchor leg on the Dutch 4×100 Free Relay on Sunday night. The elder Campbell sister (Cate), Sjostrom, and Heemskerk are the only 3 swimmers to clear 53 seconds this year.

Tyler Clary will have his work cut out for him in the men’s 200 backstroke if he wants to seize his first World Championship title, and a slew of youngsters may pose the biggest threat to the throne this year. Australia’s Mitchell Larkin performed extraordinarily well in the 100 backstroke en route to winning the World title two nights ago, and USA’s Ryan Murphy posted a blistering fast 52.18 lead-off split on the Mixed 4×100 Medley Relay to properly announce his presence on the international scene. Of course, Japan’s Ryosuke Irie and Poland’s Radoslaw Kawecki are familiar with accumulating hardware in this event on the international stage as well, and this race is truly anyone’s for the taking.

Rikke Moller Pedersen will have to fend off Japanese teenager Kanako Watanabe in the 200 breast, while Russia’s Yuliya Efimova will try to extend her speed for an extra 100 after winning the 100 meter variant of the discipline on Tuesday night. Japanese veteran Rie Kaneto has also been a 2:21 this year from back in April when Japan conducted its National Championships, and she will surely also be vying for a medal spot in the later rounds.

On the men’s side, this is Hungary’s Daniel Gyurta’s race to lose, but a number of swimmers will challenge him for the title in Kazan. Germany’s Marco Koch enters with the fastest seed at 2:07.47 from last August, and Kazakhstan’s Dmitriy Balandin, the USA’s Kevin Cordes, and Great Britain’s Adam Peaty are just three of many swimmers who have already had great success this week, and will be looking for more in the 200 breast.

Finally, the women’s 4×200 Free Relay will conclude our action this morning.

Sweden’s Sarah Sjostrom and Australia’s Cate Campbell paced the heats this morning with identical 53.22 showings. Sjostrom was out 25.94 compared to Campbell’s 25.71 opening 50, but the Swede posted the fastest 2nd half amongst all qualifiers with a 27.82 split to come home.

Americans Simone Manuel and Missy Franklin did what they needed to do to advance to the semifinal round with Manuel turning in a 53.99 (7th) while Franklin turned in a 54.22 (10th).

Notably, Hungary’s Katinka Hosszu was a no-show in this event this morning.

Australia’s Mitch Larkin easily cruised to the fastest time of the morning with a 1:55.88 out of the final heat. It became immediately apparent that Larkin was conserving his legs, and coming off his victory in the 100 back from Tuesday night, the 22-year-old should have plenty of confidence entering the semifinal tonight.

Japan’s Ryosuke Irie and USA’s Ryan Murphy followed close behind with a 1:56.68 and 1:56.71 respectively, and both swimmers seemed to do just enough to progress to the next round. Irie did give the crowd a preview of his trademark closing speed by erasing Murphy’s 0.3 second lead over the last 15 meters of the race.

Tyler Clary of the United States also looked comfortable this morning with a 1:56.92 that was good for 6th overall. Clary finished 3rd in this event two years ago, and though defending champion Ryan Lochte is not competing in this event, Clary will very likely want a rematch against Irie after just losing the silver medal to him two years ago.

Japan’s Kanako Watanabe just barely edged out several swimmers to top the field this morning with a 2:23.29. Though she can be content with having a middle lane tonight, only 0.70 seconds separate the top 8 swimmers, and Watanabe will need to be closer to her seed time if she wants to maintain good lane positioning in finals.

USA’s Micah Lawrence was right behind Watanabe with a 2:23.32, and she was very close to her seed time of 2:23.05 from last year’s Nationals. Her best time is a 2:21.74 from the 2013 edition of the World Championships, and given how tight the field is across the board, there is a good chance several swimmers will push Lawrence and Watanabe closer to their respective bests. World-record holder Rikke Moller Pedersen from Denmark looked long and smooth on her way to a 6th-placed 2:23.90 effort.

Shockingly, Russia’s Yuliya Efimova failed to qualify for the semifinals with a 2:26.11. Efimova was far behind at the 100, and though she likes to reel in the competition over the last 50 meters or so, her tactic did not pay off this time around. Also failing to qualify for finals was USA’s Breeja Larson, who finished 19th with a 2:26.38.

Germany’s Marco Koch paced the field with a 2:09.12 out of the final heat. Behind China’s Feilian Mao, Koch had the fastest 2nd 100 out of all qualifiers with a 1:06.27 coming home at the end of his race. Koch has been a 2:07.47 from last year’s European Championships so it is very likely we will continue to see him improve in the subsequent heats.

Hungary’s Daniel Gyurta looked very relaxed in his win out of the second circle-seeded heat, and it is very likely that he will have more competition in the semis tonight. Also looking controlled this morning was Kazakhstan’s Dimitriy Balandin who dipped under 2:10 with a 2:09.75.

The USA’s Kevin Cordes was out under World Record pace at the 50, but slowly faded over the next 3 laps. Finishing wiht a 2:09.94, Cordes is in 7th entering the semifinal rounds. Nic Fink, the other American in the race, also qualified for a second swim with a 12th-placed 2:10.43.

Italy’s relay seized the top time from prelims thanks to a great anchor from veteran Federica Pellegrini with a 7:52.51. Pellegrini’s split of 1:56.60 was good enough to reel in the then-leading Australian relay, but the top 3 teams are only separated by a total of 0.15 seconds.

The American relay easily won the first heat with 7:52.61, and this gave them the 2nd fastest overall time of the morning. Leah Smith’s opening leg of 1:57.52 was the third fastest lead-off leg amongst all competing teams, and the United States have plenty of room for improvement leading into tonight given that both Missy Franklin and Katie Ledecky did not swim in the relay this morning.

For the second straight event, Russia was shut out from a second swim as they took 9th overall with a 7:55.19. Despite taking second in the first heat, the second heat proved to be much more formidable in terms of competitiveness, and this could prove to jeopardize Russia’s standing in the overall medal tally.

Notably, Sarah Sjostrom recorded a 1:55.69 on the end of Sweden’s 4th-place-finishing relay to post the fastest split from all competitors this morning.

Sarah is not the reigning world champion in the 100 freestyle. She was second last time around, and I’m betting this year she’ll take 2nd again.

I think Shi Jinglin will be one of important champion candidate in 200m breaststroke.Her main project is 200m.

When do prelims start here? Its 1130pm in California already

It should be starting in about 2 minutes.