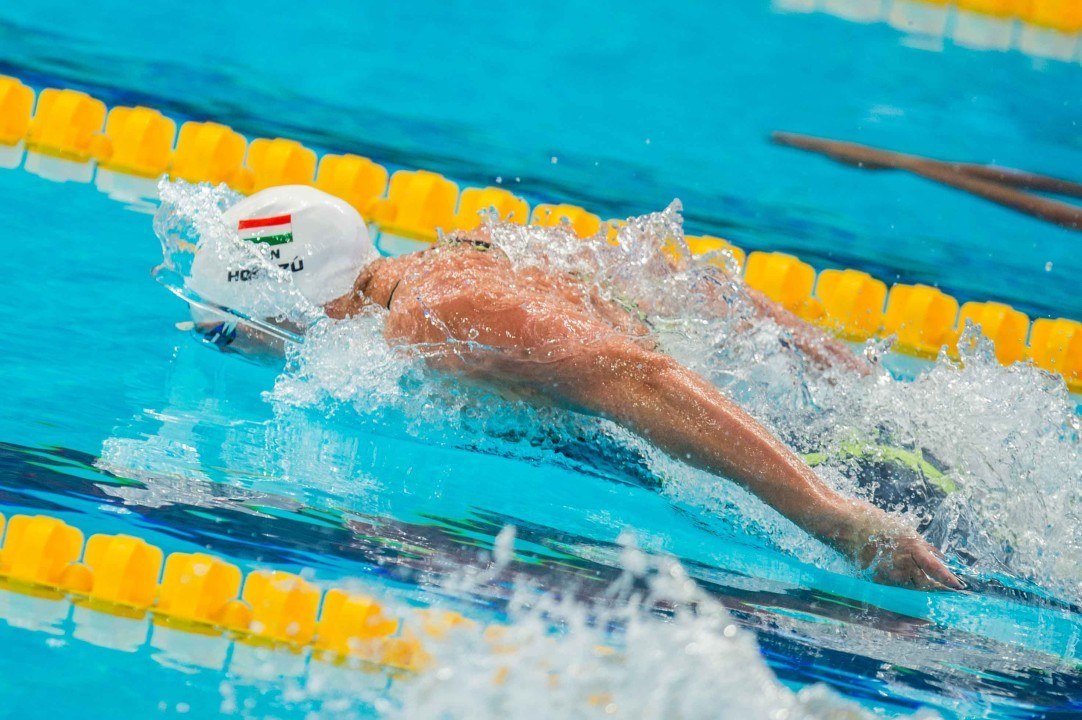 China's Sun Yang looks to extend his distance dominance downward to the 200-meter race a day after winning the 400 free. Current photo via Tim Binning/TheSwimPictures.com

It’s day 2 of the pool swimming portion of the 2015 FINA World Championships, with 5 more events lined up in morning heats.

We’ve got some notes of intrigue from each of the five, along with all the links you need to follow Monday’s action.

The 100 back offers our first look at Missy Franklin, the subject of much consternation this past calendar year. Franklin is the defending world champ in this event, but is coming off a summer in which back spasms robbed her of any true breakout swims at Pan Pacs.

Franklin will have to overcome Australia’s Emily Seebohm, who upset her at Pan Pacs last year. Fittingly, they’ll swim side-by-side in prelims, both drawing heat 7 in the circle seed.

Also keep an eye on Australia’s other contender, Madison Wilson, a heat earlier. Before that, Denmark’s Mie Nielsen will take on do-everything Hungarian star Katinka Hosszu  in the first circle-seeded heat.

The men’s 100 back is another race with some great prelims matchups. Olympic and 2013 World Champ Matt Grevers is the top seed, and he’s been all but unbeatable since London. That’s save for last summer’s Pan Pacs, when Grevers was beaten by Japan’s Ryosuke Irie. The two match up in adjacent lanes in heats this morning in what should be a stellar rematch.

Great Britain’s breakout star Chris Walker-Hebborn will take on the other American, 2013 silver medalist David Plummer, in the first heat, and Frenchman Jeremy Stravius could be a factor as well.

The heat in the middle, though, might be most intriguing. China’s Xu Jiayu has a tendency to blow up at domestic meets, but hasn’t been able to match his best times on the world stage. Next to him is Brazil’s Guilherme Guido, coming off a huge relay split at Pan Ams, and Australian Mitchell Larkin will also be in the hunt.

The women’s 100 breast looks to be a showdown between world record-holder Ruta Meilutyte and Russia’s Yulia Efimova. Meilutyte was the 2013 World Champ for Lithuania, and excelled at last summer’s Youth Olympic Games. Efimova, meanwhile, is coming off of a doping suspension that kept her out of last summer’s major meets, but will be swimming in front of a home Russian crowd in Kazan.

Keep an eye on defending European champ Rikke Moller Pedersen of Denmark – she’s best at the 200 breast, but has enough speed to challenge for a top spot in the 100-meter distance.

The men’s 200 free looks much more wide open with defending champ Yannick Agnel out for France and Japan’s Kosuke Hagino also not swimming. Still, there are some big talents set to collide. China’s Sun Yang looks to extend his distance dominance downward to the 200-meter race a day after winning the 400 free. He takes on European champ Velimir Stjepanovic of Serbia in his heat.

The chief challenger to Sun, though, might be Australia’s Cameron McEvoy, who lines up in heat 7 against the likes of Dutchman Sebastian Verschuren and American Ryan Lochte. And don’t count out world record-holder Paul Biedermann of Germany, who too often gets pigeonholed as a bodysuit specialist, when he’s still a gold medal threat in textile today at the age of 28.

Anytime you have a chance to see Katie Ledecky swim, take it. Even in prelims, Ledecky is a show, and there’s no telling when she might start Hulk-smashing her own world records. Ledecky is the runaway favorite here, but the race for the qualifying spots behind her should be good.

Denmark’s Lotte Friis is a top-tier talent, but she’ll have to get through New Zealand’s Lauren Boyle and rising Dutchwoman Sharon van Rouwendaal to win her heat. 400 free bronze medalist Jessica Ashwood of Australia drew Ledecky’s heat, and will swim a lane over from the world record-holder.

Gold and silver today for GB I reckon.