2014 Big Ten Men’s Championship Fan Guide: The Wolverines Will Be Hard To Beat 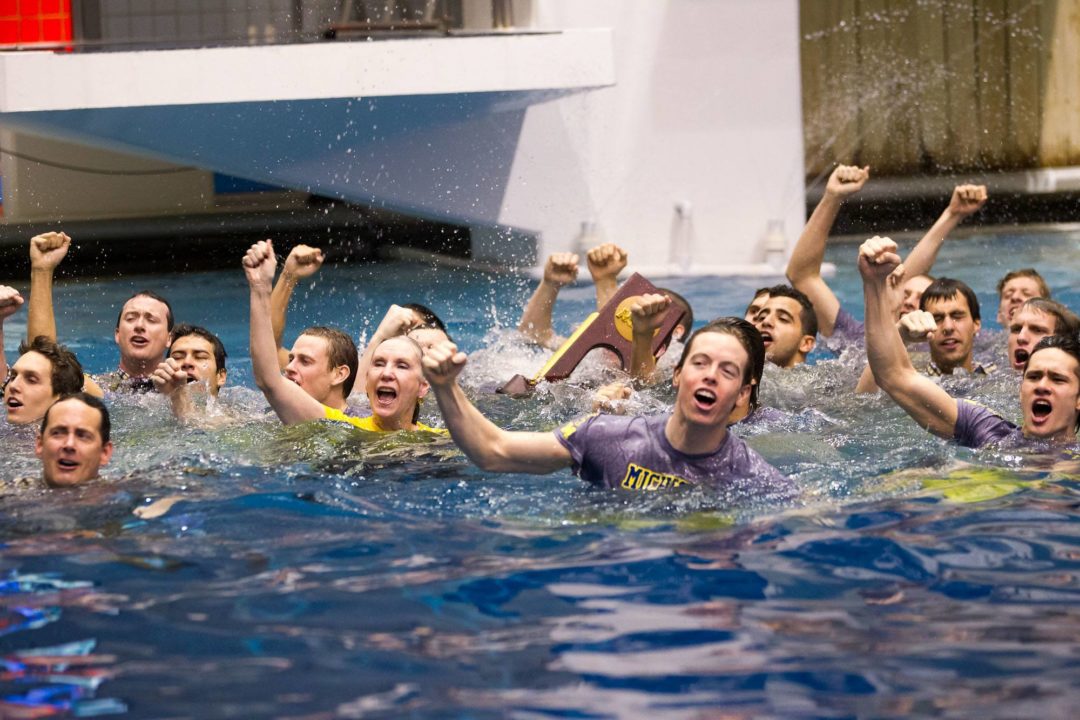 The Michigan Wolverines, last year's national champions, will be hard to beat at this year's Big Ten Championships. Archive photo via Tim Binning/TheSwimPictures.com

MINNESOTA:  Derek Toomey (senior sprinter), CJ Smith (junior distance), Kyler Van Swol (Senior butterflier), Daryl Turner (Sprint freestyle/backstroke/butterfly) – Toomey will have to lead the Golden Gophers this season. They have many experienced stars along with a few fresh faces that will allow the team to get closer to a top 3 finish.

NORTHWESTERN: Jordan Wilimovsky (sophomore distance), Uula Auren (junior breaststroker), Chase Stephens (Senior sprinter), Andy Jovanovic (Freshman butterflier/backstroker) – Northwestern is another team that needs to build up and gain experience over the next few years. Stephens has had a great year, and is one of the top seeds in the 50 freestyle.

OHIO STATE: Tim Phillips (senior butterflier/sprinter), Shane Miszkiel (senior diver), Connor McDonald (junior backstroker), Josh Fleagle (sophomore sprinter), Michael DiSalle (sophomore sprinter) – Tim Phillips will be the one to watch for the buckeyes after a semester with David Marsh and SwimMAC. Connor McDonald and Shane Miszkiel will also be big contributors. McDonald is the top seed in the 200 backstroke with an “A” cut time and Miszkiel will take on the large group of Indiana divers.

PENN STATE: Shane Ryan (sophomore sprinter/backstroker), Sean Grier (senior backstroker/butterflier), Nate Savoy (junior backstroker), Matt Salig (senior butterflier), John Hauser (senior freestyler), James Wilson (senior breaststroker) – We should expect to see much stronger relays from this team this year. There is a strong group that will be able to come together, especially with the medley relays, although their freestyle relays will be competitive as well.

WISCONSIN: Drew Teduits (junior backstroker), Nicholas Caldwell (junior freestyler), Nick Schafer (junior breaststroker), Andrew Suchla (freshman diver) – The Badgers took a big hit with the loss of last year’s senior class. The team is weaker this year and will need to develop and work to fill the large holes this year. The team still has Drew teDuits, who was the NCAA champion in the 200 backstroke last season.

The Michigan men were hit with a lot of graduations from their NCAA Championship team, and though their progression this year hasn’t been the same as last year, they’re still just way, way too deep. They’re seeded to have over 60 scoring individual swims: which is almost double anyone else in the conference.

The Indiana men will rack up massive points in the diving, just as they did last year, and though Ohio State has some good ones of their own (senior Shane Miszkiel), nobody can match the sheer number of divers Indiana will put forward.

But the question is, can Ohio State put enough forward on diving that their superior swimming depth gets them into 2nd place? They lost their best sprinters, but after the top few in the conference (Bruno Ortiz, Derek Toomey, Danny Tucker), there’s not a ton of depth. That means that Josh Fleagle and Vlad Komarov and Michael DiSalle should be able to get the Buckeyes enough points in those sprint events to not get hurt too badly.

We still have to see where Tim Phillips comes out after his semester at SwimMAC, but we think the Buckeyes will have enough to get it done for 2nd. They’ve had some deep recruiting classes of late that should serve them well here.

This meet won’t be competitive for first place among teams, but it will be extremely fast. I’m still a believer that Michigan has what it takes to win nationals again. With their strong mid distance free group, breastroke and fly, they can get the job done. With less of a top tier group this season, they’ve swam differently all season and I expect their best NCAAs yet.

I agree with Mead Michigan will take the top honors the dog fight will be for second and third. Indiana and Ohio State will need to have every point count, if there are spoilers from other teams that take points away it will get ugly quickly. Hope everyone is on thier game. Hate the temps for the meet days. Its going to be the BIG Polar Vortex Championships.Stay warm everyone!!

I believe Funk is a Junior for Michigan