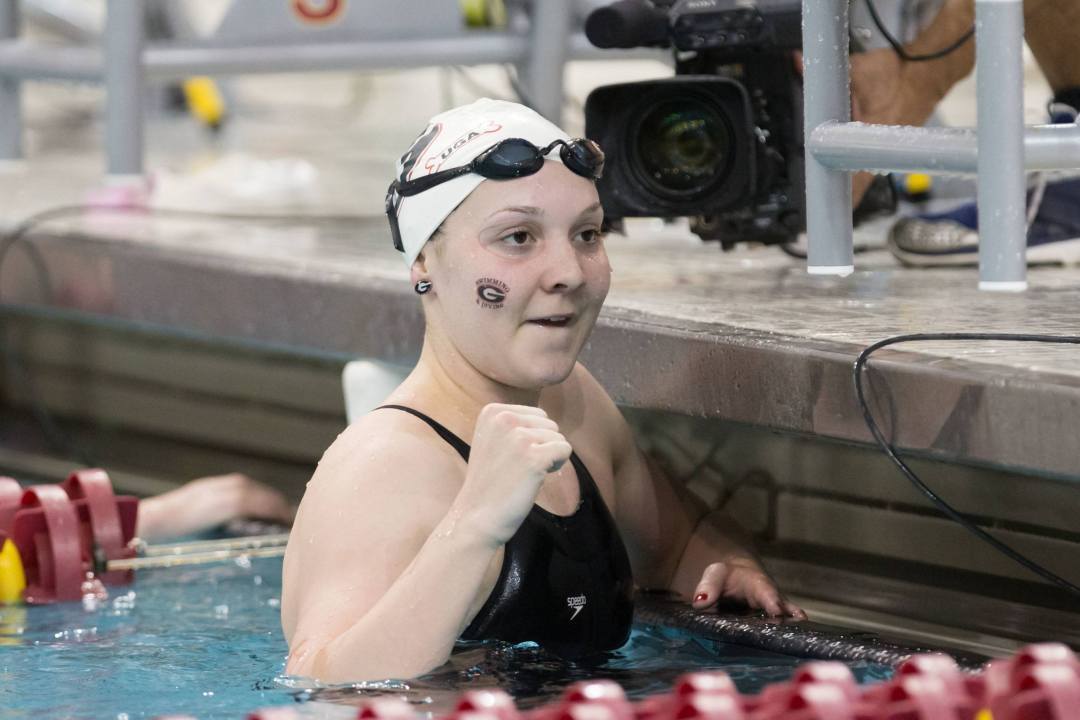 Returning double-event champion Brittany MacLean is one of many reasons why the Georgia Bulldogs are in good position to vie for their third straight NCAA team title. Current photo via Tim Binning/TheSwimPictures.com

Author’s note: I blew it.  This was supposed to be published at the end of last week, but the 9-to-5-that-isn’t-really-a-9-to-5 was a bit crazier than usual.  So we’ll just have two servings of power rankings be posted this week, with the men’s returning on Thursday/Friday with a focus on how the landscape has shifted over the past two weeks.

As fall invite season creeps closer, we’re following up last week’s initial 2014-15 NCAA Men’s Power Rankings with our first set of NCAA Women’s Power Rankings.  Like with the men’s list, we’re using largely the same criteria in these rankings from last year, but given it’s early in the season, we aren’t putting everything into how the team looks in meets so far.  Again, here’s a copy of our methodology:

While we’re taking who is on a hot streak right now, ultimately, the team’s end of the season prospects matters a bit more.  However, THESE ARE NOT STRICTLY OUR “NCAA PREDICTIONS”.  Consider this a combination of present and future prospects.  In addition, here’s some other factors we considered (if they look familiar, we copied and pasted a majority of these from last years’ articles):

In other words: feel free to have your own rankings, your own opinions, and disagree with our rankings. Just don’t embarrass yourself while doing it.

No matter which way you slice it, the Bulldogs have the most complete, well-rounded team in the country.  Distance talent galore (McDermott and MacLean are 1-2 in the 1000 currently), and the addition of Kylie Stewart bolstered their butterfly/backstroke groups handily.  The breaststroke group is thin, but returning scorer Annie Zhu is good enough to make that a moot point if a majority of the team is firing on all cylinders.

As expected, the sprint group has been lights out (three in the top 8 in the 100 free, fastest 400 free relay by nearly 2.5 seconds).  On the other side of the coin, the Cardinal’s lack of IM and distance depth was exposed in their dual meet loss to Texas.  Postseason meets favor Stanford significantly (5 relays instead of just 2, more emphasis on top-end talent than depth), but they still have some question marks.

The Bears haven’t looked particularly good this season, and they still have a pretty clear breaststroke issue, but there’s too much top-end talent to put them anywhere outside the top three (even with the loss to Texas and second place finish at the All-Florida Invite).  Butterflyer Noemie Thomas is already proving to be an important pickup.

The Aggies dispatched in-state rival Texas after watching them put up a pair of impressive victories over Stanford and Cal.  Freshman Beryl Gastaldello has been a difference-maker, and Sycerika McMahon is filling Breeja Larson’s shoes admirably.

Carol Capitani has this team rolling in her third year at the helm in Austin.  Despite the setback against A&M, the Longhorns beat Stanford and Cal in back-to-back days this month behind national leader Gretchen Jaques and some impressive versatility from Madisyn Cox.  Pretty good recruiting season for the ‘Horns, too.

With Elizabeth Beisel gone, this is Natalie Hinds’ team now.  The Gators also graduated individual All-Americans Ellese Zalewski and Alicia Mathieu, but Gregg Troy always has a couple swimmers come out of nowhere with a monster taper at the end of the year.

Jasmine Tosky is beginning to look like her old self again, posting a clear nation-leading time in the 200 fly (1:55.59) and the #2 400 IM (4:12.34).  Chelsea Chenault is living up to the hype (already 4:42 this season, three seconds ahead of anyone else), and  Kasia Wilk is one of the country’s most improved swimmers.  However, they looked vulnerable in their loss to Arizona this weekend.

The Volunteers certainly have some holes in their roster, as evidenced by their come-from-behind effort to tie Auburn and top Louisville this weekend, but Molly Hannis and Faith Johnson are still around to provide some serious firepower.  As usual, Matt Kredich’s medley relays look dangerous.

Courtney Bartholomew, Leah Smith, Laura Simon, Ellen Williamson, and Kaitlyn Jones is a great core to build a team around.  The thing holding them back?  Sprinters.  The Cavaliers have just one swimmer (Ellen Thomas, 38th in the 50) in the top 50 nationally in the 50 or 100 freestyle.

Wildcat relays looked to be hurting coming into the year without Margo Geer, Alana Pazevic, Grace Finnegan, and Ashley Evans, but individual talent remains with returning All-Americans Bonnie Brandon and Tjasa Oder.  Superb diving helps, and Taylor Schick has progressed nicely, but Rick Demont still needs some more sprinters to come through the woodwork for the Wildcats (who are a surprising 6-0 to start the year including victories over USC, UCLA, and Wisconsin) to stay up here in the ranks.

Once again, this is a Minnesota team that’s deep across the board with some All-American talent sprinkled in.  Kierra Smith is top 6 nationally in both breaststrokes, and freshman Brooke Zeiger looks poised to make an impact this February/March.

Perennial All-American Lindsay Vrooman is gone, but this is still a young team with a ton of talent, highlighted by returning NCAA champion Brooklynn Snodgrass.  The way the Hoosiers are competing now, Snodgrass will have others joining her on the podium in March; Haley Lips and Kennedy Goss are both in the top five nationally in at least one event.

The Wolverines are still probably a year away from truly shaking things up at NCAA’s (wait until next year’s recruiting class shows up), but Mike Bottom is slowly building another contender in Ann Arbor.  Freshmen Gillian Ryan, Clara Smiddy, and Hannah Moore are already making noise.

Tanja Kylliainen is back doing crazy 1000 free-400 IM-200 fly triples in meets, but Cardinals fans have plenty of other things to be excited about, too.  Andee Cottrell (top 5 in both breaststrokes) and Kelsi Worrell (#1 in the 100 fly) raised some eyebrows at the SMU Classic last month.

Unlike Arizona, the Badgers are all set in the relay department, returning 3 of 4 relay swimmers on every relay,  including elite sprinter Ivy Martin.  Dana Grindall (already 49.8 in the 100) gives the Badgers a strong #2 sprinter.

Tough call to push the Tigers back here (really, could very easily be 13th).  Ashley Neidigh is having a breakout season for the Tigers, including a 9:44 1000 freestyle this weekend against Tennessee.  Jillian Vitarius is back, as well, and their sprint freestyle relays that looked to be in trouble (graduating 5 of 8 legs) have turned out to be just fine (3rd nationally in the 200 free relay).

The SMU Classic usually results in some pretty fast early season times, and this year was no exception, especially for its hosts.  Marne Erasmus has picked up right where she left off last season, and Rachel Nicol (2nd nationally in the 100 breast) gives the Mustangs a 1-2 breaststroke punch with returning All-American Tara-Lynn Nicholas.

The Tarheels had a puzzling NCAA’s last season, but they’re an incredibly deep team with good young talent.  Hellen Moffitt is beginning to come into her own.

The Wolfpack have serious potential in the sprint relays with Riki Bonnema and Lauren Poli leading the way.  This is a team that’s trending up.

Kaitlyn Dressel (top 6 in the 50 and 100 freestyle) is in the midst of a breakout season.  With top 25 swimmers in each of the three 100’s of stroke (including Chelsea Britt, who holds the #4 fly time in the country), the Seminoles could shake things up in the medleys.

Alyson Ackman is the story here.  The Nittany Lions will go as far as she takes them.

The bad news: the Fighting Irish might only have one swimmer score at NCAA’s.  The good news: it’s Emma Reaney, who is good for 50+ points by herself.

Dunk City is quietly putting together a pretty good swim team.  Emma Svensson and Kira Toussaint give the Eagles a solid chance to break into the top 20.

The Wildcats carry a thin squad, but Tina Bechtel is the real deal.  Can’t forget Abby Myers, either.

In Cal’s section: “second place finish at the all-Georgia invite”

I may be wrong, but was that actually the all-Florida invite?

Can’t believe Mizzou is not ranked. Especially after solidly beating UK. Hopefully this weeks meet earns them some respect.

Mizzou is solid, and they (along with UCLA and San Diego State) were actually the next off our list. These rankings will certainly change as the year goes.

Thanks…..and understand it is difficult to rank teams. The real measure will be NCAAs. Once again….thanks.