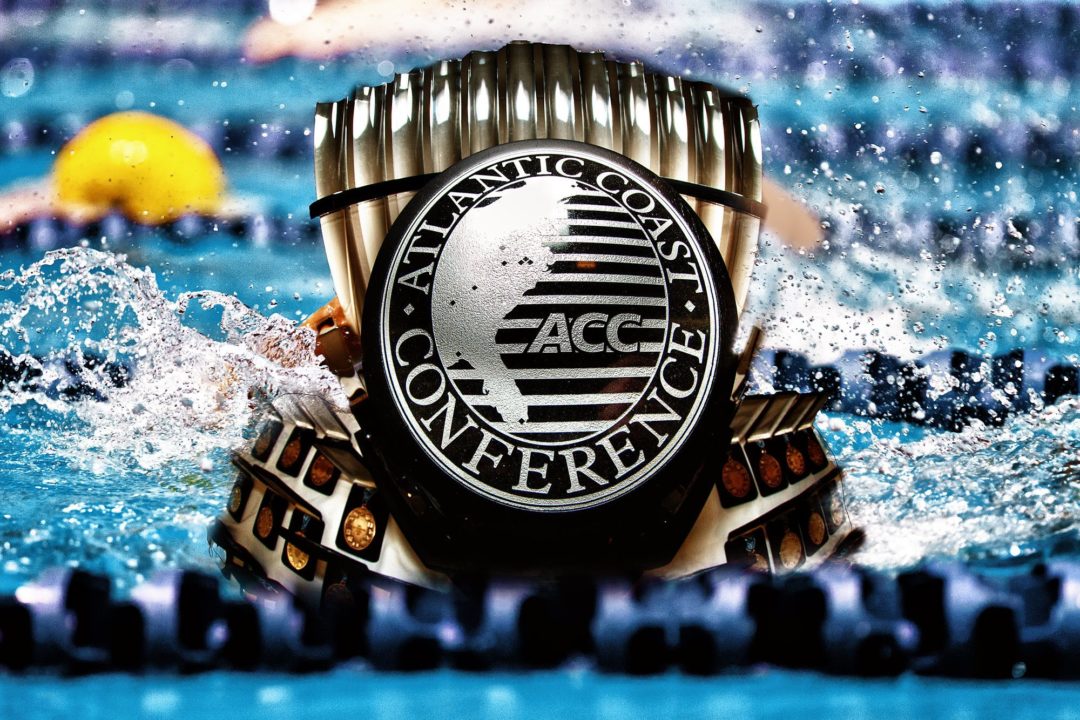 The Virginia Cavaliers should win the meet, but there are lots of great individual races on tap. (Graphic Courtesy: ©Tim Binning/TheSwimPictures.com)

The Virginia women are on a 5-year winning streak at the women’s ACC Championship meet, and with Olympian Lauren Perdue back at full-strength this season, it’s unlikely that North Carolina (or anybody else) is going to close the 200+ point gap on them from last season.

With that team title all-but-decided, the focus instead becomes a lot of eyeballs on who wins what individual races, and what times they go in the process. Perdue, as we mentioned, is healthy again, and a lot of the other Virginia swimmers are performing very well as compared to last year. But so are their conference foes, especially those from North Carolina, and NCAA Record holder Stephanie Peacock, as well as the sprint group out of Florida State. Peacock could be chasing her own record in the 1650 already at this meet (she broke the 1000 earlier this season) and should largely be swimming alone in that event.

The Cavaliers’ depth is veritably unmatched (relative to conference, probably only the Texas men and women go deeper than the Cavalier women do). There will still be plenty of awesome top-end battles in this meet, however, so pay special attention to the “Showdowns” section.

A quick note, as this year’s ACC Championship meet will have a weird feel to it. Next season, we’ll see at least one new team (Official joining dates for Louisville and Notre Dame are still waiting for settlements to be worked out), but this year two teams will be missing: the cut programs from Maryland and Clemson. That leaves this meet down to just 9 teams, with an undetermined number of them going forward.

100 freestyle – Virginia’s Lauren Perdue is a runaway favorite to win the 200 free title. In this 100, though, where she’s looking to end her career with a perfect 4-for-4 ACC Championship run, things are not so clear-cut. The Florida State duo of Tiffany Oliver and Kaitlyn Dressel have been 48.5 and 48.7 this year, respectively. Remember how good their male sprinters were mid-season, thoguh, and wonder perhaps if those two have any more to give. It’s going to take at least a 48.1 or 48.2 to win this race, one would imagine, so that’s what everyone’s shooting for.

100 butterfly – Had Maryland not folded and Megan Lafferty not transferred to Arizona, this could’ve been an even better race. As things sit now, it could be one of the swims of the meet. We now know that Virginia Tech’s Heather Savage is not only the best in ACC history, but an All-American after finishing 7th at NCAA’s last season. UNC’s Katie Nolan has transformed from one of the top backstrokers in the conference to this year being the fastest butterflier so far. Virginia’s Ellen Williamson swims the 200 backstroke, but because of depth will probably be in this 100 fly again this season looking to build off of her freshman success. Miami’s Lucy Worrall was a best time of 52.86 already this season. There’s a ton of names in this race, and better yet: they’re all on an upward, not a plateaued, trajectory for their careers.

100 Breaststroke – Miami senior Sofia Johansson is the favorite in this race after breaking the ACC Record last season and becoming the first swimmer in conference history under a minute. Duke’s Christine Wixted, though, is already right on top of her best times this season. There’s not a lot of big names here, but this race is perhaps most notable because if anybody wants to make up serious ground on Virginia or North Carolina, this would be a place to do it. Though not a probability, it’s definitely a possibility to keep the two powerhouses out of the A-Final in the event.

Things are pretty clear-cut at the top of the conference. Virginia and North Carolina should once again run away from the field here, and expect perhaps a 200 point margin from 1st-to-2nd, and 2nd-to-3rd.

Who will be in that third-place position is up for debate. Both of the contenders, Virginia Tech and Florida State, are built very similarly. Both have great diving programs, and both have very good sprint programs. Right now, though, Florida State looks like they have just a few more scorers, so we’ll give them the edge.

Beyond that, I think that North Carolina State can jump Miami with the Hurricanes’ losses. Without Abby Johnston’s injury, Duke probably would jump Georgia Tech. As things are, though, give the edge to the Yellow Jackets.