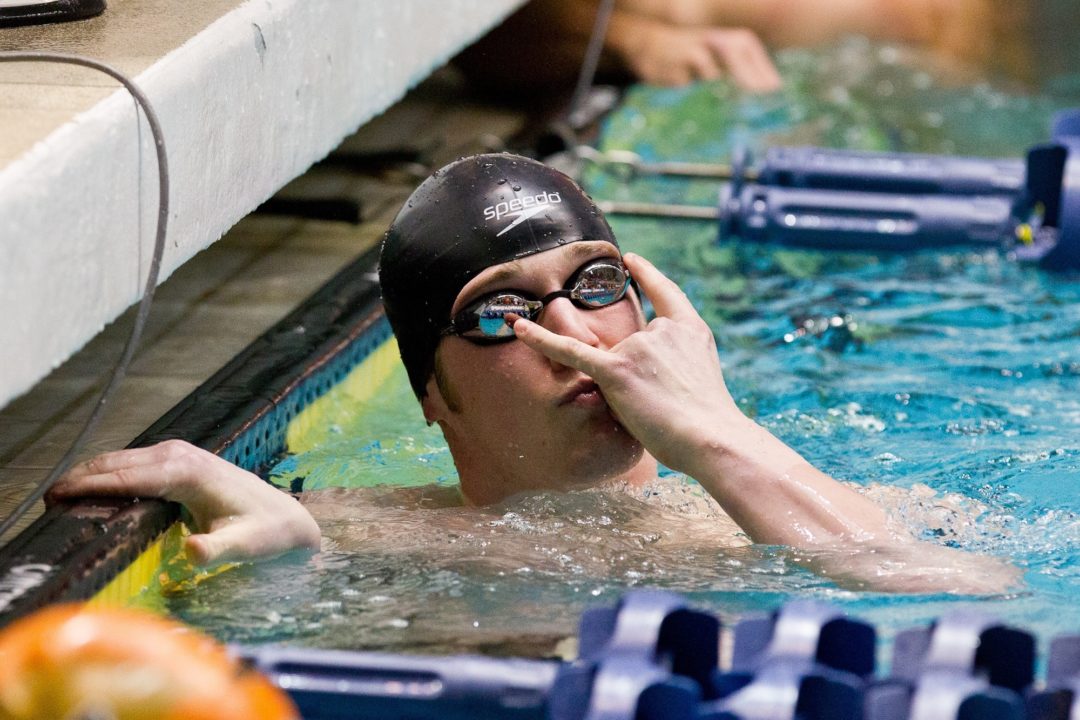 Day 1 of the 2012 Men’s NCAA Swimming Championships got off to a bit of a rocky start for the whole field. Each of the top 6 or 7 teams had bright spots, but each already had big disappointments. The task in finals will be which team can best rally around their leadership and mitigate the losses in the first finals session.

The Texas men (Jimmy Feigen, Tripp Cooper, Charlie Moore, and Dax Hill) showed off the big taper we’ve been waiting for by taking the top seed in this 200 free relay in 1:16.58. That’s a full second faster than their seed (and even that was done at the American SC Championships, a week after Big 12’s, and a week into a three-week taper). They got huge bookends from Jimmy Feigen (19.05) and Dax Hill (19.08). Those are the two guys who will have to nudge the Longhorsns to a National title if they want it with their relay performances.

Stanford took the 2nd seed in 1:17.01. They looked fantastic in this relay, with the exception (surprisingly) of freshman David Nolan. That included an 18.83 second leg from Aaron Wayne, but Nolan led off in only a 19.60, which was almost the slowest time of teams that made the A-Final. One might presume that he’s saving his energy for the big 200 IM showdown, but that’s not certain.

The Florida State men had an outstanding final three legs to qualify 9th, with Michigan and Iowa behind them. Among big names to miss the final altogether were Georgia, Virginia, and Tennessee. Penn State also missed the final in 18th, but they did drop close to a second from Big Ten’s, which bodes well for their more powerful medley relays later in the meet.

Michigan’s Connor Jaeger has had a breakout season in 2012, going great in-season times both in this 500 and the mile. He’s continued that breakout through prelims of this 500, with the top seed in 4:13.78.

Just behind him (swimming out of the same preliminary heat) was Georgia’s Martin Grodzki in 4:13.80, which is a massive, three-second season drop. Between him and Andrew Gemmell (18th – 4:17.75), the Bulldog pair dropped a combined five seconds from their seeds in this event. Though Will Freeman did add a small amount, the Bulldog distance group overall seems to be hitting their taper.

Stanford’s Chad la Tourette swam very well at Pac 12’s, and some thought that it might be the famous Stanford Pac-12 taper kicking in. Not so, however, as he demolished that time here for the 3rd-seed in 4;14.65, which is the fastest he’s ever been. It looks like the Cardinal are determined to make this a team battle this year. USC’s Cristian Quintero took 4th in 4:14.89, and Auburn’s Zane Grothe took 4th in 4:15.55.

Michael McBroom of Texas, Bobby Bollier of Stanford (the highest-ranked returner), and Michigan sophomore Sean Ryan (4:16.28) all also made the final.

The biggest surprise to miss the final was Michigan’s Ryan Feeley, who was 24th in 5:19.35. With how well his teammates swam, he might have been hoping for better.  Florida struggled in this race as well: their two freshman (Nicholas Caldwell and Carlos Omana) added 10 seconds collectively, while Connor Signorin only dropped two-tenths.

Connor Jaeger of Michigan surprised the field with the top time in prelims of the 500 free. Photo Courtesy: ©Tim Binnings/TheSwimPictures.com

David Nolan took the top seed in the 200 IM, but again didn’t look great in 1:42.70 (though he was fairly red-faced, indicating he was working a little bit). That’s a couple of tenths off of his time from Pac-12’s, and still not close to what he went as a senior in high school. He’ll be hoping for a lot faster in finals. Meanwhile, his main competition Cory Chitwood of Arizona slid to the B-Final in 1:44.14.

Arizona did get some positive news when Texas transfer Woody Joye jumped to 6th and an A-Final in 1:43.46, a two-second time drop. He’s the only Arizona scorer who’s dropped time thus far on day 1 of the meet. Austen Thompson also snuck into the A in 1:43.72.

Cal  really began to pick up their peformances in this event. Sophomore Marcin Tarczynski took 2nd in 1;43.15 on a great first 150 (he bettered Nolan on all splits save the freestyle; that includes the backstroke where Nolan is so good). Just behind them was Michigan’s Kyle Whitaker in 1:43.20. He had the best finish out of anyone in the field, and should push things a bit faster in the first 100 in finals.

David Nolan after taking the top seed in prelims of the 200 IM. Photo Courtesy ©Tim Binnings/TheSwimPictures.com

Jimmy Feigen took the top seed easily in this 50 free, with a 19.03 in prelims. That’s a tenth faster than he was in prelims of last year’s meet. The other favorite for this race, USC’s Vlad Morozov, was the 4th seed in 19.35. Last year, Morozov shot all of his bullets in prelims and didn’t have enough left in finals. I’d expect the opposite trend this year.

The top seed, Jason Schnur, looks to have held his taper decently, with a 19.30 for the 2nd seed in prelims. North Carolina got a nice surprise when Steve Cebertowicz took 3rd in 19.34.

Stanford’s Aaron Wayne (19.36) and Auburn’s Drew Modrov (19.36) tied for 5th. Clemson’s Eric Bruck makes it look like the Clemson men are going to finish out their program’s history strong; he was 7th in 19.39. And Seth Stubblefield of Cal continued a strong morning performance overall by the Bears (the 200 free relay not-withstanding as it needs to be faster in finals) with a 19.41 to drop half-a-second and move into the A-Final.

Arizona looked much better in this 400 medley relay than they did in the rest of the session (with four swimmers who hadn’t competed yet, at that) as they took the top seed in 3:06.12. That included great middle splits from Carl Mickelson (51.39 breaststroke) and Giles Smith (45.68 fly). The Wildcats are going to be counting on bigtime relay points in the evening session to carry them through a tough first day.

Cal showed their hand in the 400 medley by putting defending 100 back champ, and 100 fly favorite this year, Tom Shields on the backstroke leg, which he led off in 45.62 – easily the fastest in the field (and exactly a second faster than Stanford’s David Nolan).

Stanford was 4th in 3:06.94. Penn State, Louisville, Michigan, and Auburn also made the A-Final. USC, saving Dimitri Colupaev off of this relay, is in the B, as are A&M, Florida, and Virginia.

Other good splits in this race were a 41.4 anchor from Louisville’s Joao de Lucca, a 41.78 anchor from Stanford’s Aaron Wayne, and a 45.33 fly from Michigan’s Dan Madwed.