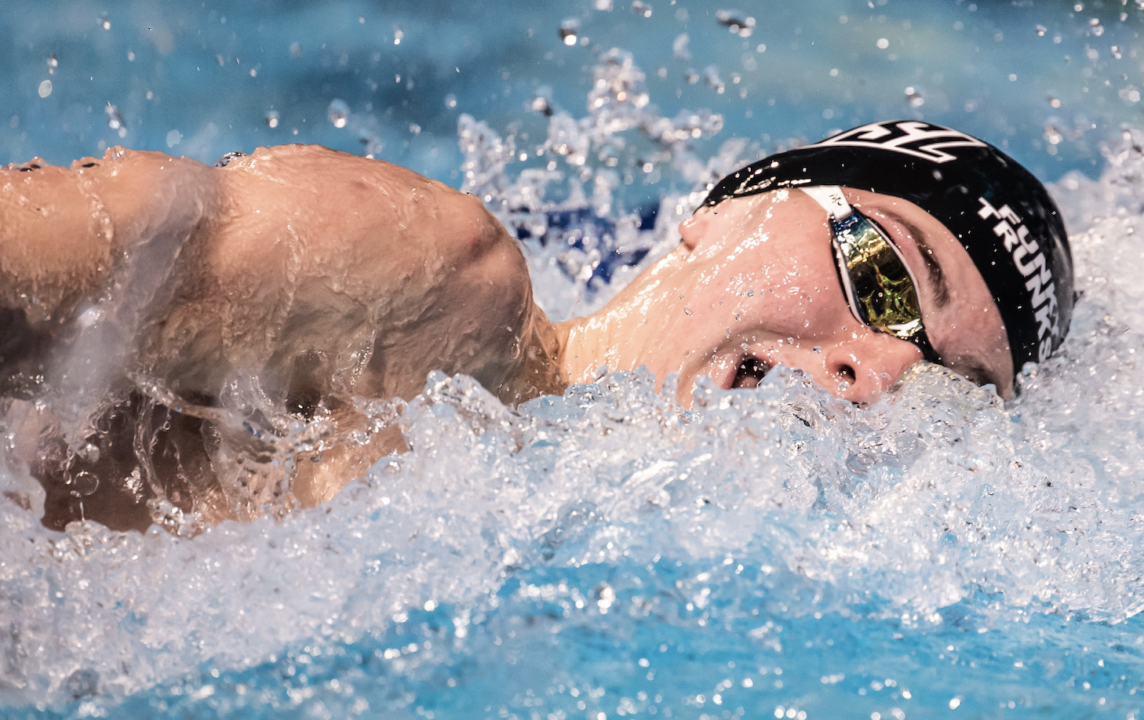 Watch the women’s 100 back Olympic record get broken three times and Katie Ledecky’s Tokyo 2020 debut in the 400 free from day two prelims.

During last night’s prelims session at this British Swimming Glasgow Meet, 16-year-old Jacob Whittle fired off the fastest 100m freestyle time of his career. Hitting the wall in 48.75, Whittle shaved .01 off of his previous PB and British Age Record en route to capturing the top seed in the process.

It turns out that was just a warm-up swim for the Derventio Excel athlete, as Whittle hacked another .20 off of his time to take gold in this morning’s final. The NY Breaker was once again skilled in his splitting, opening in 23.78 and closing in 24.77.

Below is a comparison of splits among his top 3 swims.

For reference to just how impressive a 48.75 is from a 16-year-old, Whittle is faster than the reigning world champion in the event Caeleb Dressel was at age 16. In 2013, Dressel posted a new US 15-16 age group record of 49.28; a mark that still stands today.

With his new 48.55 scorcher, Whittle moves up one spot among the all-time British 100m freestyles, hopping over Lewis Burras.

As quick as Whittle is at this young of an age, Romanian David Popovici is still faster by nearly half a second, owning a newly-minted lifetime best of 48.08 en route to placing 6th at the European Championships. Popovici is also just 16 years old as is known to be the fastest 100m freestyle ever worldwide for the age.

Whittle has already been named as the youngest member of the British Swimming Olympic roster for Tokyo, earning his berth as a member of the men’s 400m free relay.

Could you update Tom Dean to 48.30 from last month’s Euro Chanpionship final.

As easily predicted already two years ago, when Richards won EuroJuniors in 48.88 and Whittle swam 49.97 at 14, Great Britain 4×100 free looked extremely promising towards Paris 2024. Now Richards’ PB is 48.23 (Richards is just 18 year-old), Whittle’s PB is 48.55 (Whittle is just 16) and there’s also Tom Dean (21) in the mix, already at 48.30 and with so much room for improvement in the 100 free, a relatively new distance for him.
How fast will swim these three plus Duncan Scott, one of the best relay swimmer ever (and James Guy will also be very, very competitive) in the 2024?

I guess predicting how fast the potential relay will be isn’t as easy as predicting the progress of the Richards and Whittle. 😂

GB can use him for the individual 100 if Scott decides to drop it.

First it was popovici now whittle man these young bucks are getting faster and faster and I’m 18 and a good 8 seconds back.

Do we have a historical ranking of 16-year-olds in this event?

Wasn’t there a Brazilian swimmer that broke 48 at 16 several years back?

The British men’s 4X100 free relay is starting to look crazy promising for 2024.

I can’t imagine one second that the British win that relay at olympic games held in France! That’s not even conceivable! 😆

You have 3 years to adjust, doable!

Dont get your knickers in a wad Chap. The Brits will not challenge the Americans or Aussies!!!!

Yes unless something out of the blue happens in the Aussie trials, the Brits has the Aussies covered in the 4X100.

I would have thought Guy was in the top 10, but no.
Whittle is insane, but Popovici is illegal.