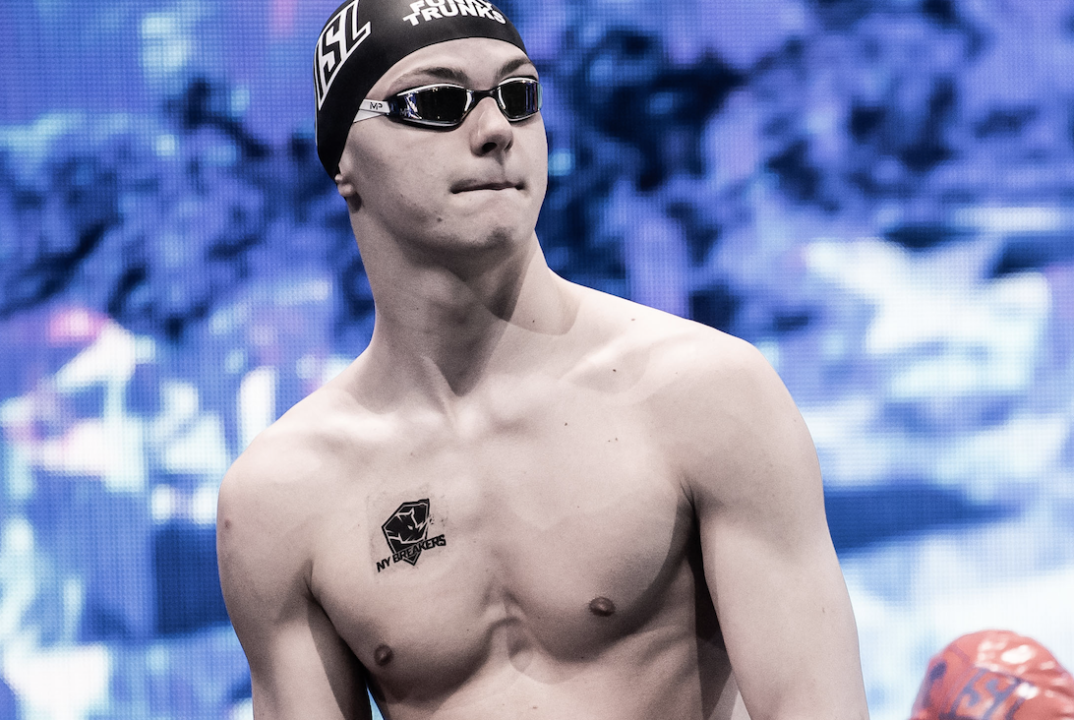 16-year-old Jacob Whittle just dropped .01 off of his own previous British Age Record in the men's 100m freestyle while competing in Glasgow. Archive photo via Mike Lewis/Ola Vista Photography

Already having secured his spot on the British Olympic roster for Tokyo, 16-year-old Jacob Whittle is getting some additional racing action in at this British Swimming Glasgow Meet. And, he’s making the most of the opportunity to try out night prelims and morning finals, just as he’ll do in Tokyo.

Competing in the prelims session this evening, Whittle produced a top-seeded effort of 48.75 in the men’s 100m freestyle. Landing lane 4 with his swim, Whittle sliced .01 off of his previous lifetime best and British Age Record for 16-year-olds. He notched the previous mark of 48.76 at the 2021 British Swimming Selection Trials where he finished 4th, good enough to add his name to the lineup for this summer’s Games.

For reference to just how impressive a 48.75 is from a 16-year-old, Whittle is faster than the reigning world champion in the event Caeleb Dressel was at age 16. In 2013, Dressel posted a new US 15-16 age group record of 49.28; a mark that still stands today.

As quick as Whittle is at this young of an age, Romanian David Popovici is still faster by over half a second, owning a newly-minted lifetime best of 48.08 en route to placing 6th at the European Championships. Popovici is also just 16 years old as is known to be the fastest 100m freestyle ever worldwide for the age.

Jeeez the kids these days!

The splitting of these races are just incredible

He has every chance of swimming the 100 at the Olympic Games if he can get the ‘A’ time tomorrow. You’d think it’s quite likely Scott & Dean both scratch the event. He still looks so raw too, lots to learn with his skills and technique – Sky’s the limit.

Burras, Dean, Richards & Whittle all born 2000 or later – Real hope for Britain’s sprint freestylers for the next few years.

Why would Dean scratch?

I look at it like this: The 100 is a secondary individual event for Tom (should Dunks scratch as he has indicated), realistically he has no chance of a medal, and it clashes with his biggest chance of winning an Olympic Gold (4×2).

But ok for Richards who also has no chance of a medal in it, and same clash? Makes no sense, particularly as it is after the 200 and he may want to best Richards for Medley relay heat.

It’s Richards’ primary event and only individual swim at the Games. Suspect Dean will lead off the 4×1 again, getting a chance to put a time down there.

Disagree it is primary given his 1’45.7 200Fr(not far off 2019 Worlds podium). The 4×200 is a history making opportunity, but you want him to attempt both potentially doing an unraced 200 in the final. Seems risky

I see him as a 200 man too, but when you actually look at it: The 100 is his only individual swim at the Games, his 200 PB would have gone out in the SFs at Worlds whilst he would have been 7th in the 100FR. Gold in the 100fr at Euro Juniors, silver in the 200fr. He has had more success in the 100 if you’re looking at actual tangible results.

You’re scratching about a bit now. He shouldn’t do the 100 if you don’t think he can double and it’s sounds like you have inside information. Must swim the 4×200 heat very well to get his final spot and make history

What I’ve said is clear imo: Tom Dean has the 200fr, where he is a medal favourite. Matt Richards doesn’t. The 100 is secondary for one swimmer, and primary for another. I’ve no doubt both *could* double – But why would you if you have no hope of winning a medal and have a better individual event? For Matt, he’s 18, at his first OLY with one individual swim. Very different situations in my eyes, but it’s a game of opinions.

If Whittle was to get the Fina A standard is up to the British selectors’ discretion if they put Dean or Whittle in? (Assuming Duncan does scratch)

Yep, entirely up to selectors. They don’t usually give swimmers & coaches no choice though – They’ll have conversation.

Yes this makes sense to me. I’d expect Scott to scratch the 100m which would leave Dean and Richards. I’d expect Dean to scratch the 100m to concentrate on the relay and his individual 200m which would leave a slot open for Whittle alongside Richards. This said, I doubt Whittle will drop half a second in the final. And Richards would presumably have to swim twice in the finals session – assuming qualification.

Britain has very good depth in the 200m and decent depth in the 100m – the problem is that their best 4 are the same swimmers at both distances.

I think the UK selectors have a more stringent threshold at 48.35. But I could be wrong!

I could be wrong, but I don’t think qualification standards necessarily apply once you’re on the team. He’s already selected, if he gets the FINA ‘A’ and there is a spot going, he’ll swim it.

Yep, that’s what I said

Zero chance Dean scratches a 100 free individual spot lol. You never know what’s going to happen in this sport and giving up a race at the freaking Olympics is not on the cards unless you’re Phelps and it literally is not possible.

It is crazy how fast he goes in races without wearing a “real” tech suit. The Funky Trunks suit he wears is awful (I was gifted one and tried it) and he would be better off wearing a practice brief than that. Get Whittle a Mizuno or an Arena and he is a 48.0 swimmer.

He wears FTs? Whatever works for him, but yeah, I’m with you. Mizuno for me, every time.

Watch the race, he wore an arena mate

Tom Dean went 48.30 at the European championships so leapfrogged Adam Brown into 4th, but that doesn’t affect Jacob – terrific swim from him

What we thinking for the 4×1 this year? Do you think Scott will be rested for the final? They might not make it without him? I think Scott, Richards, Dean and probably Guy for the final. He did a 47.9 split at the euros. He can go 47.7 split as he did at 2019 worlds.

Minakov, Popovici, Whittle, Southam and a handful more… Too many incredible kids to imagine there will be a Peaty like standout tbh.

Chalmers was 48.6 at 16 and there is someone who is older than him, who was slower than him at that time that is now better than him. He’d need to be like 47.5 or lower to have that consideration.

That guy that is faster (not better) then him is at .08 faster & that is not an insurmountable time.
Wait till this guy wins Olympic gold in the 100 free to be Chalmers equal.