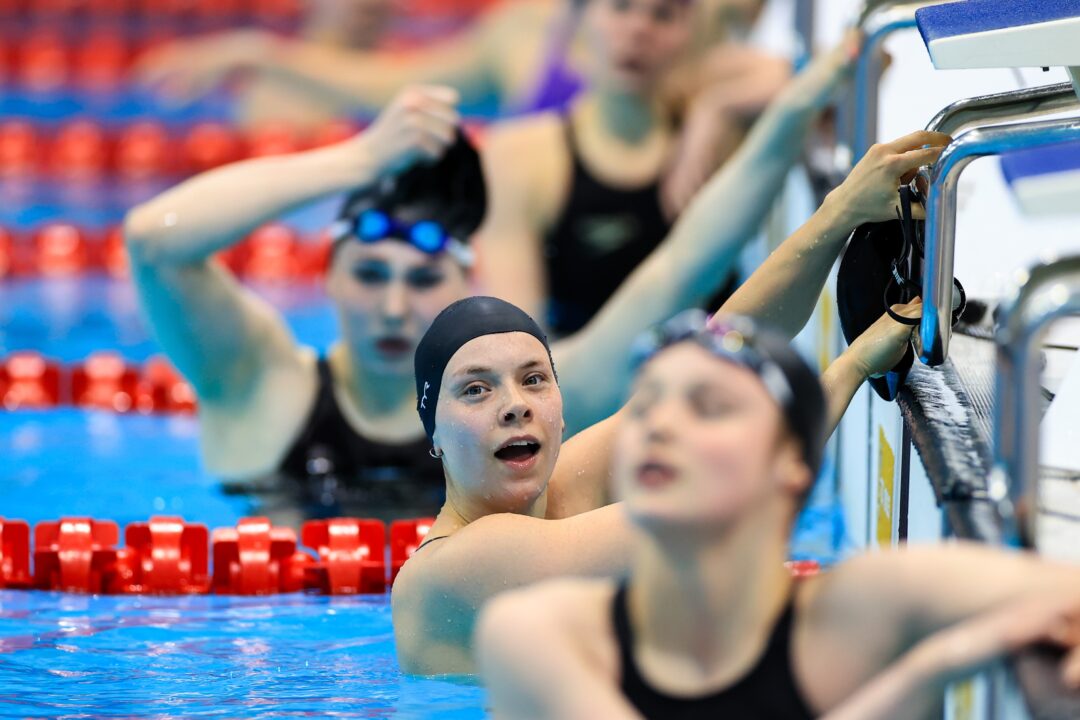 More than 300 athletes have descended upon the Tollcross International Swimming Centre for the British Swimming Glasgow Meet.

The competition marks the largest and most inclusive event run by British Swimming and its partners since the return to competition under COVID-19 protocols, with this meet’s environment being contained in a secure bubble-type format.

For any swimmer who has not achieved a British Swimming-mandated cut in an Olympic event in which there are still slots available, this meet represents the final opportunity to put on a performance worthy of consideration.

Already Olympic qualified Abbie Wood led the women’s 200m IM heats tonight, producing a time of 2:10.14 while Max Litchfield led brother Joe Litchfield in the men’s edition. The former hit 2:00.15 while the latter posted 2:00.86. Stirling duo Mark Szaranek and Duncan Scott were next in line with 2:01.10 and 2:01.76 respectively.

Scott blew away the field in this event at the British Olympic Selection Trials, smashing a 1:55.90 new British national record en route to adding his name to the Olympic roster for this 2IM. The aforementioned Joe Litchfield also qualified for Tokyo with his time there in London of 1:57.74.

The women’s and men’s 100m fly event was also on tonight’s prelims agenda with Keanna Macinnes and James Guy taking their respective pole positions. Macinnes, who has a solid shot of making the squad this weekend in the 200m fly, posted a prelims swim of 59.43 while Guy grabbed the top spot in 52.04.

Cassie Wild, training partner and University of Stirling teammate to Dawson, sneaked into tomorrow morning’s final in a time of 2:16.32 as the 8th slotted swimmer.

Wild put up the performance of her life to not only capture European Championships silver in this 200m back event (2:07.74) but also add her name to the Olympic roster for Great Britain in the event.

Speedster Anna Hopkin has already qualified in the women’s 50m and 100m freestyle events, but that didn’t stop the former Arkansas Razorback from unleashing the 5th fastest time of her career.

Roaring to the wall in a mark of 24.67, Hopkin’s time sits just .16 away from her 6th place-rendering result of 24.51 from the European Championships. Trying to become the 2nd swimmer on the roster in this event are Isabella Hindley and Lucy Hope, who each are gunning for the 24.60 qualification time needed for Tokyo.

A couple of very fast swims from Hopkin & Wood on an evening where it looked like most big names were coasting heats. Both right on their Euros times. Candice Hall dropping from 2.13.6 to 2.12.0 in the 200IM was a pleasant surprise.

Any idea why Lewis Burras (your dark horse for this meet) didn’t start in the 50 free?

Was on entries, disappeared from startlists. Think he’s had quite a difficult time of it so not totally shocking if he gives it a miss, but I’d love to see him have a crack in the 100. Massive talent if he gets settled and stays in the sport.

I’m no psychologist, but his recent social media has been erratic. At some point he tried to go to war with SS (sorry SS), and then the next day he’s off social media, then he’s trying to build a business on his IG, then he’s deleting his account.

I think he’s maybe got some things to get squared away before he can focus on sport. I hope he finds the help he needs to get there, because he is a massive talent, and seems like he’s got a good heart, just…seems scattered, and like he has a big chip on his shoulder about something that he needs to get worked out.

Well her time was correct cause I watched it on the livestream. And perhaps its because the two places for 200IM for the Olympics have been filled. Don’t think they will de-select anyone!!!

200fr heats this evening, suspect she might try to put it a time down with the 4×2 in mind and scratched IM for that reason. I watched her 200IM – Not sure what happened with the splits, but it was legit.

Yeah the time was definitely right for her IM. Her splits were fairly close to whatever Wilson split next to her.

Some decent times this morning: Wood almost matching her Trials time in the 200IM (just 0.01 sec off). Good sign that she’s dropping time in the morning finals too. Scott with a 1:57, pretty solid in-season.

None of the outsiders have got particularly close to hitting a CT so far though, which is a shame. Still have hopes for Lelliott in the 200 fly (heats this evening). Also interested to see what Wood can do in the 400IM. It will be her first LCM swim in that event since her improvement kick-started. She actually credited her improvement in part… Read more »