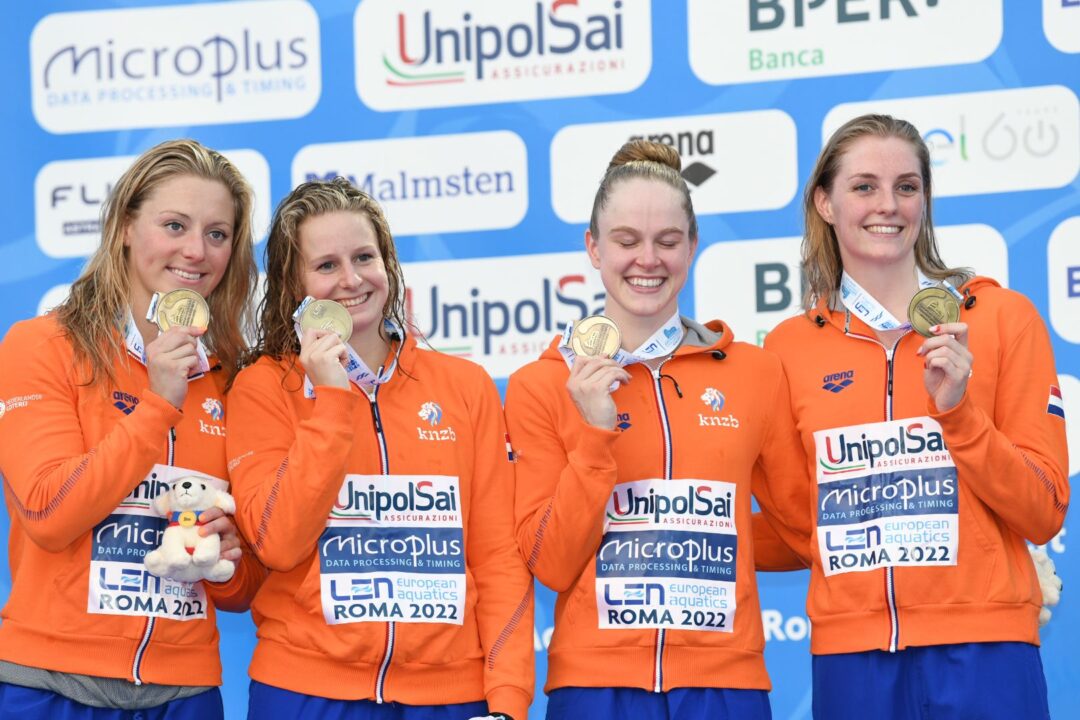 Arno Kamminga has opted out of the SC World Championships, but the Dutch will string a bring a strong roster of 16 to Melbourne next month. Archive photo via Fabio Cetti

The Royal Dutch Swimming Federation (KNZB) announced a 16-swimmer roster that will represent the Netherlands at the upcoming Short Course World Championships in Melbourne, though one key name is glaringly absent.

Arno Kamminga, the lone active Dutch swimmer who won an individual medal at the 2021 SC Worlds in Abu Dhabi, is opting out of the championships this year as he continues to recover from a series of illnesses that plagued his 2022 long course season.

Despite the absence of a triple medal threat like Kamminga, the Dutch team will still bring a strong roster to Melbourne, including nine returners from last year.

Headlining the roster is Kira Toussaint, the former world record holder in the women’s 50 backstroke who won four relay medals at the 2021 SC Worlds.

One of the highlights for the Dutch team in Abu Dhabi came in the mixed 200 medley relay, where Toussaint, Kamminga, Ranomi Kromowidjojo and Thom de Boer combined to win gold. Their winning time of 1:36.20 was .05 shy of the world record established by Toussaint, Kamminga, Maaike de Waard and de Boer one month earlier at the European Championships.

Kamminga will be the only member of that world record-breaking squad absent in Melbourne, as de Waard and de Boer join Toussaint on the roster. Kromowijdojo, however, has retired.

Among the newcomers this year will be Tes Schouten, who is coming off a record-setting performance at the FINA World Cup in Berlin, and current University of Texas senior Caspar Corbeau.

National Team head coach Mark Faber noted that they made a conscious decision to only enter individuals in Olympic events, even though this is a short course meet. That’s why we don’t see Toussaint in the 50 back, Korstanje in the 50 fly, etc.

As for Kamminga, Faber said that he never fully recovered from the series of illnesses he had in the summer, which began with COVID-19 and was followed by a series of colds.

“After intensive consultation, Arno and I have come to the conclusion that it is better for him to skip Melbourne,” Faber said. “After the ‘bad summer’ of 2022, he turned out to be insufficiently recovered – even after his holiday – to start the new season fresh. That is why we did not take him to the first training camp at altitude in Flagstaff (US) nor to the World Cup matches in October.”

Faber said Kamminga’s focus has now shifted to the upcoming Long Course World Championships in Fukuoka (July 2023) and Doha (February 2024) before the ultimate goal of the 2024 Olympics in Paris.

“Arno is now well on the way back to his old level with which he can compete for the medals. However, the goal is to get even better and go for gold. In our ‘winning’ plan, the World Championship short course in Melbourne – including the arduous journey and jet lag – comes just too early,” he said.

The Netherlands finished seventh on the medal table at the 2021 SC World Championships, winning two gold and eight total medals. Kromowidjojo won the team’s only individual gold in the women’s 50 fly, while in addition to the victory in the mixed 200 medley relay, the Dutch team also won relay medals in the mixed 200 free (silver), men’s 200 free (bronze), women’s 200 free (bronze) and women’s 200 medley (bronze) relays.

Shame about Arno .. was looking forward to seeing him race