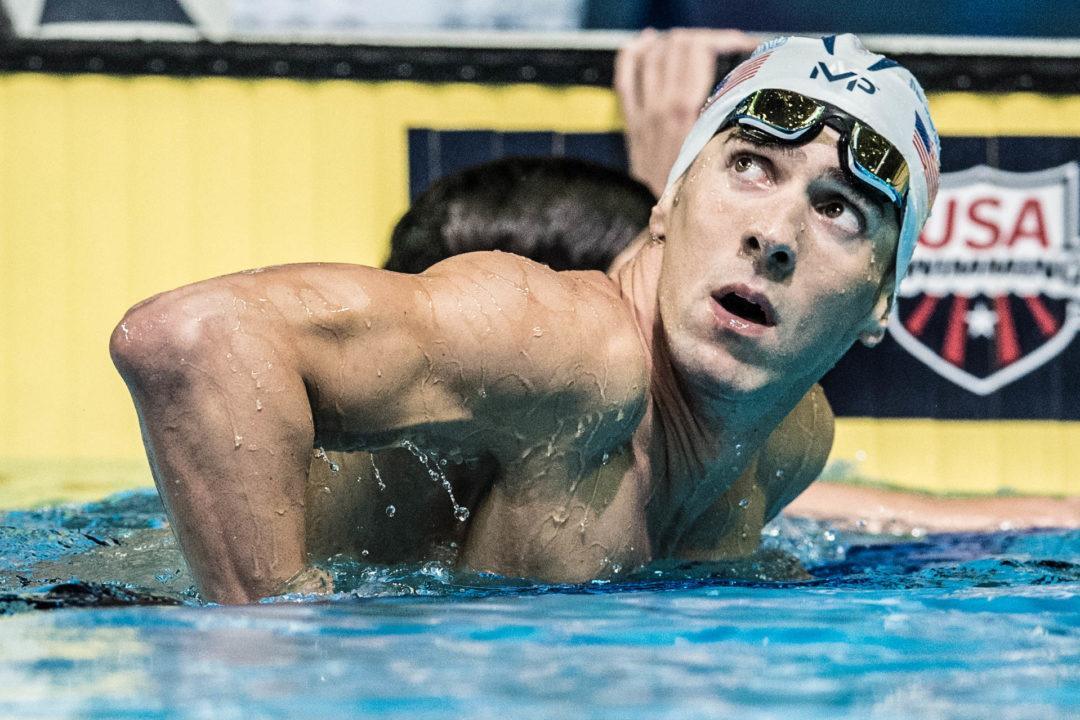 The battle between Olympic champ Michael Phelps and world champ Chad le Clos has been highly anticipated since they traded blows in the fly events in 2012. Le Clos pulled off the upset in the 200 fly, dethroning Phelps before the latter came back to win the 100 fly. Tensions have run high since Phelps came out of retirement, with the two clearly keeping each other in mind last summer.

Le Clos was crowned World Champion in 2015 after he won the 100 fly with a scorching 50.56, making him the fastest man in the world for 2015 to that point. After his gold medal performance, Le Clos aimed a little bit of smack talk towards Phelps. Though he was absent from Worlds after a DUI and some time in rehab earlier in the year, Phelps fired back at U.S. Nationals later that day with a 50.45 to unseat Le Clos as the fastest man of 2015.

This year, neither of them has broken 51 yet, but Phelps currently sits at 2nd in the world with his 51.00 from U.S. Olympic Trials. Le Clos season best is a 51.09, which currently has him sitting 3rd in the rankings. It’s likely that we’ll see them push each other under their respective season bests, as both have plenty of motivation. Le Clos has been working to cement his status as the world’s best butterflier since 2012. Phelps, on the other hand, will be looking for an unprecedented fourpeat after taking the title in 2004, 2008, and 2012.

There to potentially break up the Phelps-Le Clos party will be Hungary’s Laszlo Cseh, who was the silver medalist at worlds last summer. Cseh has typically been more competitive in the 200 fly, but he’s recently become a major player in the shorter distance as well.  He currently holds the fastest time of 2016 with his 50.86 from the European Championships. That’s a best time for Cseh, who has been a medalist at every Olympics since he first represented Hungary at the 2004 Olympic Games in Athens.

Singapore’s Joseph Schooling secured the first ever World Championships medal for his country last season with a bronze in this event. Schooling is based in Austin, Texas, where he trains under Eddie Reese at the University of Texas. His new Asian Record of 50.96 from last summer was his first time under 51, and his upward momentum makes him a serious medal threat. Schooling cleared the U.S. Open record at NCAAs with a 44.01 in the yards version of this event this season, and followed suit with an impressive long course win against Phelps at the Longhorn Elite Invite, where he swam a 51.58 that puts him 13th in the World Rankings.

Another young star looking to make his mark in Rio is China’s 17-year-old Li Zhuhao, who placed 8th at last summer’s World Championships. Zhuhao broke his own Junior World Record and tied the Chinese National Record this year at Chinese nationals, where he set his personal best at 51.24. That was his first ever Chinese national title, and potentially a good sign of what’s to come.

Qualifying for Rio behind Phelps in this event was Tom Shields, who will make his first Olympic appearance for the USA after finishing 2nd in both butterfly events in Omaha. Shields just missed the podium at Worlds last summer by a tenth, and his personal best is a 51.03 from semifinals at that meet. Shields posted a 51.20 at trials to earn the bid over a tight field, and could improve on his 4th place finish from last summer if he breaks the 51-barrier.

France’s Mehdy Metella swam a 51.70 at French Nationals this year to qualify for Rio, and his personal best 51.24 puts him in the mix for a top 8 finish. He swam that 51.24 at the 2015 World Championships where he placed 5th, just a nail ahead of Poland’s Konrad Czerniak, who finished in 51.28. Czerniak has already bettered that time this season, putting up a 51.22 at the 2016 European Championships to set himself up well for the Olympics.

The Italian duo of Piero Codia and Matteo Rivolta could make a push for a finals swim after taking the top 2 spots at Italian Nationals this year. Codia has been slightly better so far, clocking a 51.42 to place him 9th in the rankings, compared to Rivolta’s 51.54 for 11th. Sitting between the two is Russia’s Alexander Sadovnikov, who enters Rio with a 51.50 from 2016 Russian Nationals.

Darkhorse: While better known for his backstroke talent, France’s Jeremy Stravius broke the French National Record with a 50.06 in the SCM version of the 100 fly in 2013, and has continued to progress his 100 fly in meters. Stravius will make an appearance in this event in Rio after clocking a 51.66 at the French Open Championships, and currently sits at 15th in the 2016 World Rankings.

Le Clos is the obvious favourite, but he will be happy to have the Phelps assume the position. He likes nothing better than running down his prey on the final 25m. The old GOAT is no match for him.

Question, how is the goat no match for him? 50.45 > 50.56
If someone is going to be running down anybody it will be Phelps on Le Clos. Phelps is slower on the first 50m and much faster on the last 50. I don’t see anything obvious about it.

The obvious bit is that the old GOAT is Old, and getting slower.

When Le Clos smokes the old GOAT, please don’t come out and tell us that age caught up with MP. The age differential is something that we know going into the competition. Please don’t bring it up as an excuse after the event. Take the whipping and give up on the senseless Phelpamania.

He’s only swimming the fly on the big stage. Not enough range in the big pool for leclos.

Weren’t you the guy trash talking about him before SA? 51.00 100 fly with a long turn in the wall is no joke. Especially when he is not fully tapered.

That’s him. He just does it to get people wound up. He’s actual a huge Phelps fan

I love reading these old predictions.

In the 100 leclos had the faster front half and the goat the faster back half. Go look up the times.

I think this is Cseh’s year. He will finally get that elusive Olympic gold.

I would really like to see Cseh win something. I just feel like he’s more likely to win the 200 fly than the 100 fly if he does finally get a gold medal.

Mike will be far more rested and tapered for Rio. He will be fine for a gold in 20″I’m and medal at least in 100 fly

Rafael- I did a post a couple days back about Phelps’ latest facebook live video. He talks about how he tapered a little for Omaha, but gives no indication that he was fully rested. He also said he wanted to put on a couple more pounds before Rio. I think he’ll be better there for a number of reasons, and he seems happy with his schedule. He’ll make the final.

You can never doubt the GOAT.