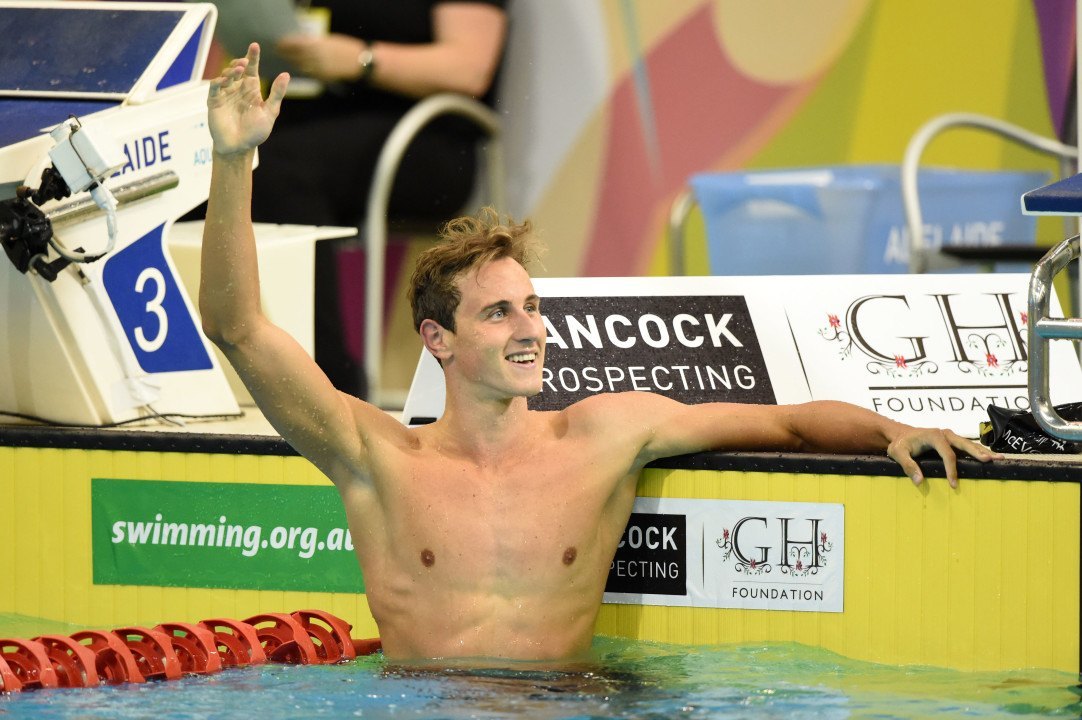 With the defending Olympic Champion, 2015 World Champion, and current fastest man of 2016 all throwing their hats into the ring in the men's 100 freestyle, we could see them push the boundaries of the 47-barrier. Archive photo via Swimming Australia

With the defending Olympic Champion, 2015 World Champion, and current fastest man of 2016 all throwing their hats into the ring in the men’s 100 freestyle, we could see them push the boundaries of the 47-barrier. This summer’s highly anticipated battle has Cesar Cielo’s World Record of 46.91 in danger, particularly in the hands of Australia’s Cameron McEvoy.

After having a breakthrough season in 2016, McEvoy is the clear front runner in this event. He’ll be making his 2nd Olympic appearance after swimming on the relays in 2012 as a 17-year-old, but this time he’ll be chasing individual gold as well as team titles. McEvoy sits on top of the 2016 World Rankings after clocking a 47.04 at 2016 Australian Nationals, the fastest time ever done in textile. If he can replicate his performance from earlier this year, he looks almost untouchable.

Reminiscent of McEvoy in 2012 is his Rio teammate Kyle Chalmers. Like McEvoy, he became the Junior World Champion in the 50 and 100 freestyle the summer before qualifying for his first Olympics at 17. Chalmers swam a 48.03 alongside McEvoy at Nationals, shattering his own Junior World Record in the process. Currently ranked 8th in the world, we could see the young Aussie make his first Olympic final.

There to challenge McEvoy for the win will be Team USA’s Nathan Adrian, the 2012 Olympic Champion in this event. Adrian has been having a great season, winning U.S. Olympic trials in 47.72 to land 2nd in the world rankings. That swim was his 2nd fastest ever, behind only his 47.52 that he swam to overcome heavy favorite James Magnussen by a hundredth for the gold in 2012, proving that he can take things down to the wire and get his hand on the wall first in a tight racing situation.

The concern for some swimmers is that they may not be able to swim as fast at the Olympics as they did at their respective Trials or Nationals, but Adrian has had no trouble replicating his fast swims in the past. He’s consistently dropped time from his Trials swims at Worlds, Pan Pacs, and the Olympics, so his time in Omaha bodes will as he heads into Rio. Last time around, he was over half a second faster in London that he was at Trials.

While Adrian is the defending champion, Team USA will also be sending out a fresh face at these Games. Caeleb Dressel, the American Record holder in the 100 yard free, will be joining him this summer. Dressel fought off a loaded field to grab 2nd at U.S. Olympic Trials in 48.23. While that was his best time, he still believes he has a 47 in him. If his ability to drop time from SECs to NCAAs is any indication, Dressel could be even faster in Rio, and we might see another American swim sub-48 this summer. This is his only individual event, and he’ll only swim the 100 free on relays, so Dressel can put all his chips in the 100 free basket – a bit like Adrian did at the 2012 Olympics.

Dressel’s former club teammate, Santo Condorelli, will swim at his first Olympics as a member of the Canadian team. He turned heads last summer when he broke 48 for the first time, swimming a 47.98 at Pan Ams that tied him as the fastest swimmer in the World at that point with his former USC teammate, Russia’s Vlad Morozov. At 2015 Worlds, he just missed the podium with a 4th place finish. Notably, he almost missed out on the final in Kazan with the 9th fastest time, but Morozov was DQed, bumping him to 8th. This year, Morozov and Condorelli are 9th and 10th in the world rankings, with times of 48.06 and 48.09, respectively.

China’s Ning Zetao, the 2015 World Champion in this event, is the 3rd fastest swimmer of 2016. His season best is from 2016 Chinese Nationals, where he swam a 47.96. Notably, he swam that time in semifinals before scratching out of the final, so we probably haven’t seen all his cards yet. Ning has been faster before, as his lifetime best is his Asian Record of 47.64 from Chinese Nationals in 2014.

Tied with Zetao is Italy’s Luca Dotto, who had an identical result at Italian Nationals with his flat start relay leg. Dotto set a new Italian Record in that race, becoming the first Italian man under 48 seconds and establishing himself as a possible finalist in Rio. The interesting thing about Dotto is that he’s been significantly faster on his relay leadoffs than in his individual swims. He won the 100 free in 48.40, so he’ll have to be able to replicate the motivation behind his relay swims in order to make the Olympic final individually.

France will send 2 swimmers to Rio who are ranked in the world’s top 10 this year. Sitting 5th is Jeremy Stravius, a former backstroke World Champion, who won the 100 free at French Nationals in 47.97. His teammate Clement Mignon took the 2nd spot, just hundredths behind in 48.01. Mignon is actually the 3rd fastest French swimmer and 6th in the world this year, but Florent Manadou, who sits just ahead of him at 48.00, will not swim this event individually in Rio.

There are several swimmers bunched in the 48.2-48.3 range who could break into the 47s to reach the top 8. Two of those swimmers, Marcelo Chierighini and Nicolas Oliveira, will have the home advantage with the Olympics taking place in their native Brazil. Both swam their season bests at the Maria Lenk Trophy, where Chierighini was a 48.20 to Oliveira’s 48.30.

Cam ran out to clean water incredibly quickly in that race. Nobody in Australia is capable of opening like him. He won’t have the clean water in rio. He will win but he won’t get a 46 or his trials time

Wasn’t McEvoy 18 at the time of the last Olympics, and wasn’t it Santana’s WJR before Chalmers broke it?

I’d like to see that suited record go down, but I fear that that 47.0 is a bit Beamon-esque. Hopefully McEvoy can make it happen. Adrian is my favorite, and I’d love to see him break it, but that’s a bit too optimistic.

Not tryna be a dick, but Bob Beamon’s record was friggan insane.

Yes and it wasn’t broken for almost 23 yrs. however the person who broke beamons recurs Powell has held the record now for almost 25 yrs!

You are right. To be a pedant, no swimming WR from the 80s can be called “beamonesque”. Not even legendary WRs by Meagher, Evans, Egerszegi, Thorpe, Hackett, Phelps, Ledecky, Sjostrom. Nope.

Beamon was almost 10% better than the 2nd in 1968. Beiderman would have had to have been about 9 seconds ahead of 2nd place when setting the record to be mentioned in the same sentence as Beamon

Alright, that’s a fair point. Maybe not Beamon-esque, but I do think that that record is safe for now.