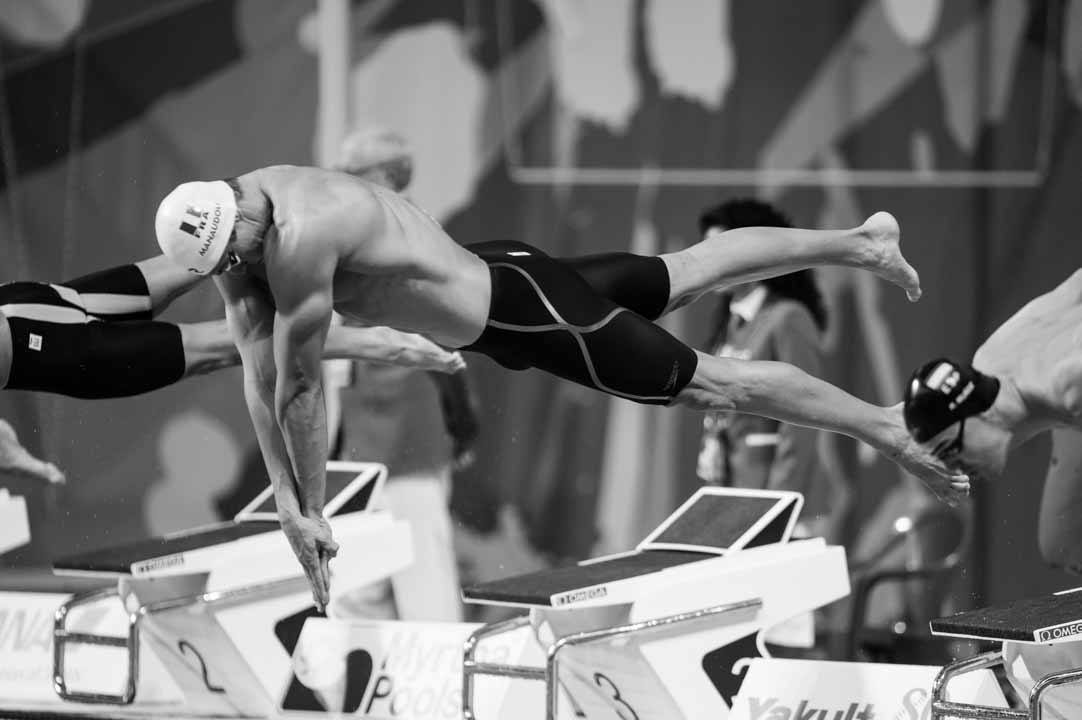 Florent Manaudou will be the favorite to repeat his gold medal performance in the 50 free at the Rio Olympics. Archive photo via Mike Lewis/Ola Vista Photography

All of the men’s freestyle events could see repeat winners at the Olympic Games, with the 200 free being the biggest long shot. On the other hand the 50 free, which would have to be considered the biggest toss up of all the events due to its length and variability, is arguably the one most likely to see someone repeat as champion.

2012 Olympic gold medalist Florent Manaudou was a surprise winner four years ago, swimming over half a second under his personal best to claim gold out of lane seven. After a so-so year in 2013, Manaudou has asserted himself over the past two as the man to beat in the 50 free. He won the 2014 European Championships by over half a second and the 2015 World Championships by over three tenths.

He has continued his momentum this year, winning his second straight Euro title and posting the fastest time in the world with his 21.42 from the French Olympic Trials. There are many legitimate threats who could dethrone Manaudou, but he has proved he’s the best there is over the past few years and always swims his best when the stakes are highest. Manaudou’s three fastest swims ever are from the 2012 Olympic final, the 2014 Euro final and the 2015 World final.

Though Manaudou will be in Rio to defend his title, the two who joined him on the podium four years ago will not. Cullen Jones (2012 silver medalist) and Cesar Cielo (2012 bronze medalist) both painfully finished 3rd at their nations Olympic Trials, leaving them to imagine what might have been as they both ponder retirement. Cielo was also the Olympic champion in 2008 and remains the world record holder. Another man expected to put up a fight in Rio was American Caeleb Dressel, who finished 4th at the US Trials after posting the third fastest time in the world last year (21.53).

Interesting Fact: 2005 World Champion Roland Schoeman and former world record holder Eamon Sullivan, both finalists in London, will also not be in Rio. Schoeman missed the qualifying standard at South Africa’s Olympic Trials, and Sullivan has walked away from the sport. Along with Jones and Cielo, half of the 2012 final will be absent in 2016.

Dressel and Jones were both the victim of the ageless Anthony Ervin, who had an incredible trials qualifying in the 50 free and 400 free relay. The 35 year-old had a down year last year, failing to final in the 50 at the World Championships and posting a disastrous leg on the 400 free relay that finished an abysmal 11th. Despite many thinking the 50 was going to be all Nathan Adrian and Dressel at US Trials, Ervin showed up on superb form swimming the second and third fastest 50s of his career en route to a second place finish. This wasn’t a huge surprise after the 100 free, where Ervin showed incredible speed the opening 50 (22.37) before fading on the back half while still finishing 4th and making the relay. Ervin noticeably missed the start in the 50 free final in London and still came back to finish 5th, so a good start could mean trouble for the rest of the field. He seems to just get better with age.

Adrian, who has trained with Ervin for much of the four years from London to Rio, will also be a premier medal contender after winning silver at last summers World Championships. He set an American record in the semi-finals in 21.37, and wasn’t far off that mark to win the trials this year in 21.51 putting him fourth in the world for 2016. Adrian has typically been successful at getting faster from trials to the big meet (whether it be the Olympics, Worlds or Pan Pacs), so he’ll certainly be in the running for a medal. It seems as though he finally has both his 50 and 100 firing on all cylinders simultaneously, so watch for him to make some noise in both events.

After those three, all of whom have been crowned individual Olympic champions in their career, there are many who are knocking on the door looking for their first piece of individual Olympic hardware. Australia’s Cameron McEvoy has moved up from 20th in the world in 2015 to 3rd in 2016, coming off a remarkable Australian Olympic Trials that saw him qualify in the 50, 100 and 200 free. Will that wide range of focus take the edge off his 50? We’ll find out. He’s the heavy favorite in the 100, but with the 50 being at the end of the competition he won’t be as fresh as his counterparts swimming such a busy Olympic schedule. Nonetheless, he’s on the best form of his life and will be in the fight for a medal.

Russian Vladimir Morozov had an up and down World Championships last year in his home country, finishing with a strong 4th place finish in the 50 free going 21.56. After breakout years in 2012 and 2013 Morozov appeared to be the world’s next sprinting superstar, but Manaudou’s emergence has held him back. It will be tough for anyone to reach Manaudou this year, but a medal is certainly within Morozov’s reach. He’s already been a swift 21.69 this year and has consecutive top four finishes at the World Championships.

The other three I think will make their way into the final are Bruno Fratus (BRA), Andriy Govorov (UKR), and Ben Proud (GBR). Fratus was a devastating 21.37 in late 2015, and won bronze at the World Championships last summer.

Andriy Govorov taking off on his way to the 50 fly title at the European Championships.

Govorov finished 5th at those World Championships last summer, but has been consistently faster this year. He swept the 50 freestyle at all three stops of the Mare Nostrum Series, including a personal best 21.61 in Barcelona. He’s one who could surprise the heavy favorites. Proud has also seen big improvements since finishing 8th at Worlds last summer, swimming eight of his nine fastest 50 free’s all in 2016 including a bronze medal at the European Championships behind only Manaudou and Govorov.

A few others who will be dangerous after posting sub-22 second swims in 2016 are Kristian Gkolomeev, Luca Dotto and Italo Duarte. Gkolomeev, my dark horse pick at last years World Championships, made his way into the final in Kazan with a personal best 21.87, and has already been 21.89 twice in 2016.

Along with his long course success Gkolomeev had a successful college season, including tying for the second fastest split in history (18.00) at the NCAA Championships leading his Alabama team to gold in the 200 medley relay. Dotto swam his fastest 50 free in five years at the Italian Championships, 0.01 off what he went to win silver at the 2011 World Championships. Duarte was the one who knocked the man who won gold at those 2011 Championships, Cesar Cielo, off the Brazilian Olympic team after posting a personal best 21.82 at the Maria Lenk Trophy in April. All three have the potential to final.

*Vladimir Morozov was was named to the WADA-sanctioned McLaren report, and has been deemed ineligible for the Olympics by FINA as of July 25th.

Dark Horse: 20 year-old German Damian Wierling has gone from a personal best of 22.50 in 2014, to a 2015 best of 23.57, now down to the 11th fastest time in the world for 2015-16 in 21.81. Wierling’s huge drop this year could indicate more to come later this summer, but with minimal international experience the Olympics may be an eye opener and thus difficult to drop time. His best international performance to date was at the 2014 Youth Olympic Games, where he collected a pair of bronze medals in the 100 and 200 freestyle.

You think Ervin will add time from trials? No way. I say Adrian and Ervin both get medals and drop some time.

I meant to say added. I don’t know why I said dropped.

1
0
Reply
Not In The Know
Reply to  Hswimmer

Prediction: Ervin and Adrian tie for gold in a poignant repeat of Sydney 16 years ago.

The only way this can happen is if Gary Hall Jr. shows up behind this blocks in a Red-White-and-Blue boxing robe, throws a few air punches, and yells, “Yo Adrian!” Before handing the blocks over to Nathan.

I think Ervin may finally be figuring out his start. If he hits it in rio he could not only end up on the podium but also on top of it

I dont really agree with the predicted times i really cant see only Adrian and Manaudou dropping PBs in the final , personally think Ervin and McEvoy have more of a shot of getting a medal then come 4th and 5th