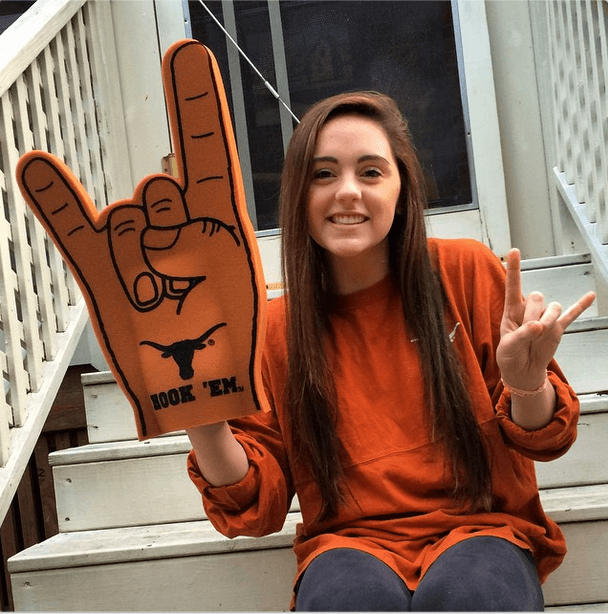 McCullagh is good in a great number of races, and could impact the Longhorns almost anywhere, but specifically she’s the lock-down sprinter that the team really needs going into the future.

McCullagh will join fellow Junior National Teamers Remedy Rule, Quinn Carrozza, and breaststroker Olivia Anderson, Carol Capitani has filled all of her immediate recruiting needs for the future, and really has earned verbals from a full NCAA-worthy medley relay in that quartet alone.

With the graduation of Ellen Lobb, Sam Tucker, and Lily Moldenhauer after last season, the program’s three-best 50 freestylers, McCullagh and freshman Mimi Schneider are the two front-runners to anchor Texas’ medleys during the 2016 championship season.

While wearing the red, blue and black of the Charlotte Catholic Cougars, McCullagh won North Carolina 4A state titles in the 100 back and 50 free as a junior, breaking State Records in both events.

Great news keeps coming for Texas women. I am very very confident in the future of the Longhorns now. Now on a side note…where is Weitzel looking? Can’t seem to find any information anywhere. Would be insane if Texas nabbed her as well. Realistic? No idea.

Weitzeil visited UT last weekend actually. So Capitani’s been hard at work building quality classes that might threaten the UGA/Cal/LSJU hegemony sooner than later. Don’t know if she has enough $ left in the bank though after all the verbals with still a large senior class to take care of.

Weitzeil also made trips to Cal & Zona. She’s had some experience with McKeever from her Pan Pacs trip. Seemed to have got on well with Runge there. The Wildcats didn’t get Bilquist so would love to sign Weitzeil, whose coach is an alumni of theirs. But U of A might have used up all their scholarships even with the Carrozza decommit. Salo remains in the running as he’s buddies… Read more »

She needs to challenge Texas A&M before she can take on GA, Cal, etc. This class will help.

eh Texas just narrowly lost to A&M last year in dual. Post season is a different story I know. We shall see.

Such a beautiful girl inside and out. Will bring great things to the table anywhere she goes in life.

0
0
Reply
ALA
Reply to  SwimParent

She will be a versatile addition for sure!!

Texas is getting one heck of a class. Congrats to Capitani.

Another great addition for the Longhorns. What a tremendous class they have coming in!! Very smart decision for this talented young athlete — Texas is top-tier in every respect, especially the quality of the people in the program. Plus Austin is really fun!

Texas has a decent developing program that’s well suited to your big talents! You will go far with them!

So I think it’s now between Stanford, USC or Arizona for the No.2 recruit.

My money’s on the Card for Weitzel’s commit. Can’t wait!

Swimnerd, you think USC and/or Arizona have enough scholarships still on the table? Each program already has 10 verbals. Seems like it might be tough to have enough for what Weitzeil is worth, I’m thinking. As for Stanford, that would be one amazing class after last year… I’m thinking Cal might still be in the mix – they only have 3 verbals and probably have room to spare.

I think she’d do well at any of those 4, actually. Arizona has had great success, with L Jackson and of course M Geer (one of my favorite sprinters to watch). USC has done well recently with K Carlson, which was nice to see her development in sprint free. Stanford has… Read more »

Not sure which is more amusing: Swimnerd’s overtly disingenuous comments or seeing some readers respond to his/her comments at face value.

Way to go, Nora…congrats to you! Capitani has done a fine job with this year’s recruiting class. The Longhorns have a nice crop of talented swimmers to add to their roster next year. I thought Nora might end up at Georgia…spreads the wealth just a tad bit more.

Capitani has really had a great year recruiting. Impressed.