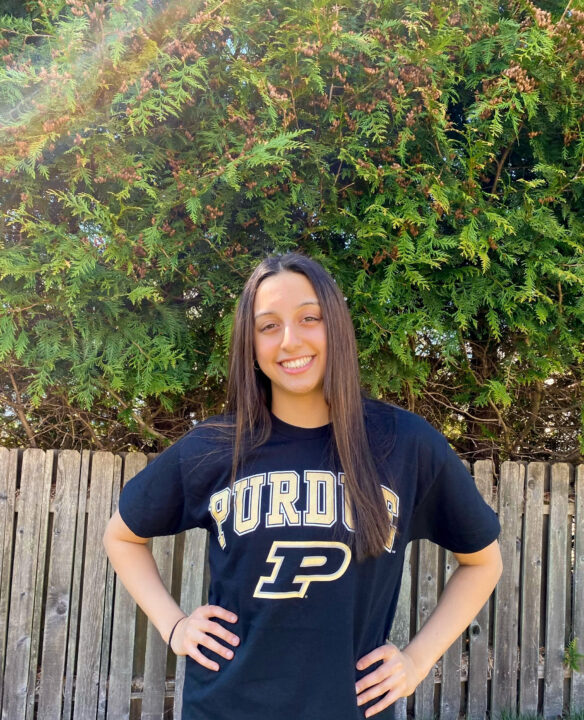 Megan Sharma, a YMCA Nationals champion in the 50 and 100 breastroke, has announced her verbal commitment to Purdue University. A New Jersey native, Sharma is set to arrive in West Lafayette, Indiana in time for the 2023-2024 season.

I’m SUPER excited to announce my verbal commitment to continue my academic and athletic careers at Purdue University! I am so thankful for my family, coaches, and friends for supporting and helping me get to this point! Boiler up! #B1G

Sharma is heading into her senior year at Hillsborough High School in Hillsborough, New Jersey. Outside of High School, she trains and competes with the Greater Somerset County YMCA team. In addition to being a YMCA National champ, she is also a Speedo Summer Junior Nationals qualifier, primarily specializing in the breaststroke events while also dabbling in the sprint free and IM races.

In March, Sharma competed at the YMCA Short Course National Championships, where she qualified for several finals and set three new personal bests. In the 200 breast, she ultimately finished eighth overall. In the prelims, she dropped three-quarters of a second for a new best time of 2:17.60, and in the 200 free, she dropped nearly two-tenths for a PB of 1:54.49. Sharma’s highest finish of the meet was fifthth, which came in the 100 breast in a time of 1:03.43.

At last year’s Big Ten Championships, the Purdue women finished seventh out of the 12 participating teams. Head swim coach, John Kilnge, has been leading the Boilermakers since 2008.

Sharma’s current best times, heading into her senior year, would place her on the edge of the ‘C’ final at Big Tens. At last year’s championships, she would have finished 23rd in the 100 breast and 24th in the 200 breast. Among Purdue swimmers, she would have ranked third in both. Purdue’s current top two breastrokers were both underclassmen last season, and will still be on the team by the time Sharma arrives in 2023.

Sharma joins an already pretty large class of 2023 recruits who have committed to Purdue. One of these is Kate Mouser, a breaststroke and IM specialist who holds very similar breaststroke times to Sharma (1:03.45 in the 100/ 2:15.16 in the 200) and a 400 IM time which would have qualified for the B-final at last year’s conference meet.