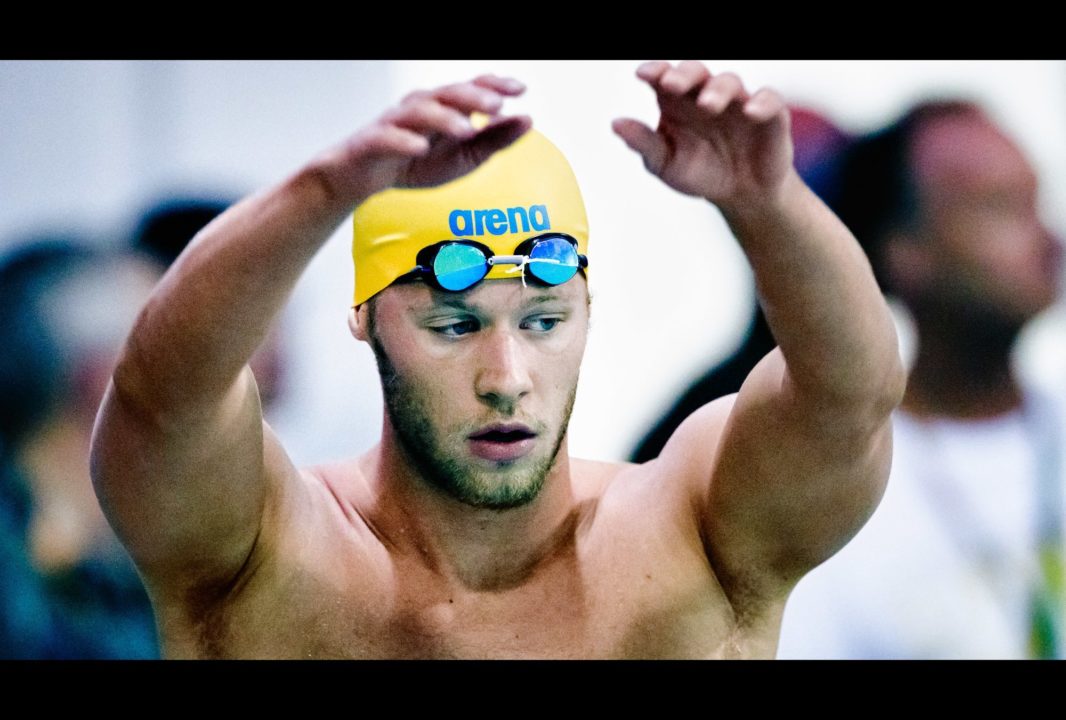 2012 World Champion Mads Glaesner will lose his Worlds bronze medal, but will keep his gold and be eligible again for the long course World Championships this summer. He was one of two Danish swimmers sanctioned for failed doping tests in the last week. (Photo: Tim Binning/TheSwimPictures.com)

The story has been updated below after FINA announced that they will strip both of Glaesner’s medals and promote the finishers below him. See more here: http://swimswam.com/fina-strips-glaesner-of-world-championship-as-well-paltrinieri-becomes-1500-champ/

The Danish Swimming Federation has announced today that Mads Glaesner has been levied a three-month ban on Sunday for failing an anti-doping test at the 2012 World Short Course Championships in Istanbul last December.

Specifically, he tested positive for Levmetamfetamine after taking a bronze medal in the 400 free.

Levmetamfetamine affects the sympathetic nervous system, though has little effect on the central nervous system as the Danish release indicates. It is used as a vasoconstrictor, in other words it makes blood vessels smaller, which could theoretically be used in periods of training to increase the efficiency of the muscles.

These vasoconstrictive qualities makes Levmetamfetamine popular in nasal decongestants, and in the United States it is an ingredient in the popular over-the-counter Vic’s Vapor rub (though other countries’ formulations do not use the substance), and according to the Danish federation this is to what Glaesner attritbuted the test. He lives and trains in Los Angeles, California at USC.

“It was a huge shock when I was informed of the positive test,” Glaesner said of the situation (translated from Danish). “It has since filled incredibly much in my life. I have always taken a strong stance against all forms of doping and could in no way take any illegal substances deliberately and with the intention of improving my performance. However, I am glad that finally things have come to an end, and again I can move my full focus back on the swim”

The Danish report credits this, as well as extremely low levels of the substance as to why the suspension was so short, and noted that two days later after the 1500 meter freestyle, his test came back clean. He won the gold medal in that 1500 freestyle.

In addition to his three-month suspension, and the loss of that bronze medal from the World Championships. New Zealand’s Matthew Stanley placed 4th in that event, and will now be awarded the bronze medal. He will also lose the medal for the 1500, even though that test came back negative.

According to the World Anti-Doping Code, the appropriate punishments for a first positive test for this substance can range from public reprimand to two years of suspension.

Earlier this week, Denmark revealed another suspension, that of Frans Johannessen at the Danish Open. Johnannessen tested positive for Terbutaline, a substance used in asthma medication. The 20-year old Johannessen had a chance at this summer’s World Championship squad himself, with bests of 1:49.7 in the 200 free and 3:56.4 in the 400 free. That best time was done at the Danish Open, and will likely now be invalidated. His immediate punishment was removal from a planned participation in this week’s Mare Nostrum series.

Taking these two tests in conjunction, the federation said that this implies a renewed need for education on the dangers of even over-the-counter medicines for elite, drug-tested athletes.

UPDATE: Glaesner has been stripped of his gold medal as well.

Totally agree with FINA on this one.

Ok you made me say it.

Something is rotten in the kingdom of Denmark

“Something is rotten in kingdom of Denmark”.. Might be but the substance came from a Vicks inhaler that Mads got from US… Exactly the same Vicks inhaler, bought from EU doesn’t contain the banned substance. Besides, the two variants look exactly alike.
So yeah, one can argue that Danes are rotten since they are stupid enough not to toss away their Vicks inhalers when flying back to Europe…

The whole happening appears to be pure negligence. Of course the negligence is not an excuse for going totally unpunished, but it should have at least some effect on people’s assessments and rhetoric about the situation.

It is just a Shakespeare joke. You guys really have either no literary knowledge or no sense of humour.

I’m not a native speaker so I may misunderstand some comments. I checked your statement and I admit you’re absolutely right. I’m sorry.

But at least my comment wasn’t directed at you, JG. It is placed where it is only because I wanted to emphasize that SwimDad seemed to understand what this whole case is about.

It is a fluke, There has been no two bans that were the same, which seems like the definition of a fluke.

Actually both Kicker Vencill and Hardy claimed tainted supplements which is such a load of baloney, and then Mellouli was adderol which he says was for studying during exams but is also one of the biggest masking agents out there, and who knows if what Glasner was taking wasn’t just a masking agent as well. So ya only two were the same claim for their positive tests but still 4 positives under one coach….

Makes me wonder…. How do all of Dave Salo’s swimmers keep getting caught for something? Fluke?

doubtful it is a fluke. I’d say at this point it is fair to ask questions about what is happening at USC.

I think its ridiculous to put this on the Coach. This is not East Germany circa 1980’s. The swimmers are the ones to be responsible, especially the pros.

Did Mads Glaesner train with Salo?

Woww.. that makes Salo’s swimmers among the most naive (or stupid?) to inadvertently (?) use banned medications.

NCAA’s drug policy is more lenient than USA Swimming’s is… wouldnt be surprised to find out that more was going on “in-season” among college swimmers.
And I’m sorry, but there are a lot more international (European) swimmers in NCAA swimming using drugs than there are Americans. There are more Americans, obviously, but I’d love to see some percentages to back that up.

Also, almost all big-name universities give their athletes a considerable amount of warning before they are tested. I swam collegiately and we knew when the tests were to given. I never saw, heard of, or felt any presence of drugs on the team I was on but it would have been all… Read more »

“Also, almost all big-name universities give their athletes a considerable amount of warning before they are tested.”

I’m not really sure when/where you swam, but I can vouch that this is not the case at big time schools.

If you test positive for something one day you are supposed to be banned from everything. How do they know it wasn’t a masking agent? So many double standards for getting rid of cheaters it’s ridiculous. They’re supposed to have all results post positive test annulled for the length of the ban. As well you’re not supposed to be allowed to train with any sanctioned club while under a ban or that club and all training partners can get banned but that never happens either.

I don’t understand why he gets to keep his gold medal? That doesn’t make any sense. Also just want to point out this is the fourth USC swimmer under Salo to test positive.

Because he didn’t test positive for any drugs after the 1500. “The Danish report credits this, as well as extremely low levels of the substance as to why the suspension was so short, and noted that two days later after the 1500 meter freestyle, his test came back clean. He won the gold medal in that 1500 freestyle.”