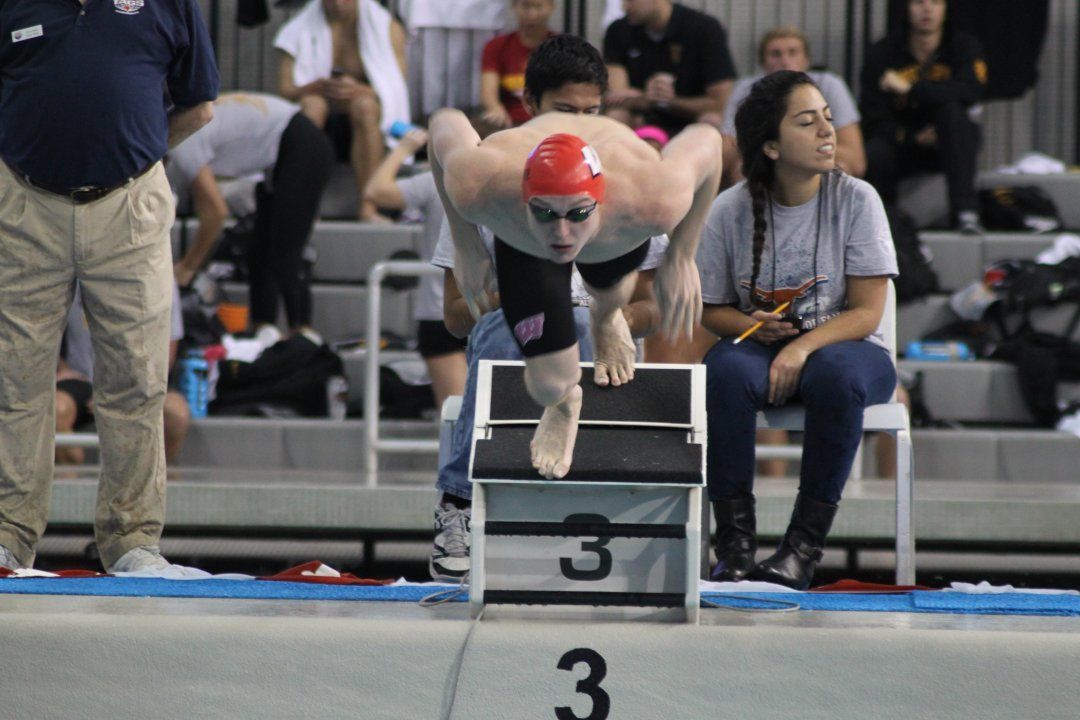 Cannon Clifton shattered four pool records, Brett Pinfold downed three, and Chase Kinney set two of her own, as the Wisconsin Badgers finished off their regular season with wins over Green Bay.  Clifton and Pinfold swam the first and last legs on each of Wisconsin’s men’s relays, including an impressive 3:10.56 400 medley relay where Pinfold led off in 46.50 (doubling as the pool record) and Clifton anchored in 42.21.  Clifton later set the individual 100 free in 42.89–less than three tenths off his team record–and led off the record-setting 200 free relay in 19.60.

MADISON, Wis. – The Wisconsin swimming and diving team closed out its regular season in impressive fashion, with both the men and women defeating in-state rival Green Bay while breaking 12 UW Natatorium pool records in the process.

“It was a good meet for us,” said head coach Whitney Hite. “I thought we did a really nice job of racing, competing, and that does give you a good amount of confidence.”

The Badgers swept all events in the pool and won three of four events on the diving boards.

“I didn’t expect to go out as fast as I did in the 1,000,” said Hutchins. “I wanted to go out fast but for the time that it was, I haven’t really started to rest too much, so going forward it’s a huge confidence booster.

Senior Cannon Clifton also had a stellar meet, winning all three events he competed in while also racking up four pool records.

Like Hutchins, Clifton earned two pool records in one race as he helped set the Natatorium record in the 200 free relay (1:19.45) along with Ryan Barsanti, Ryan Stack and Brett Pinfold. Clifton’s split of 19.60 on the opening 50-yard leg helped him earn another record as he topped his own pool standard that he set in October against Auburn.

“I just wanted to be as fast as possible just to set myself up well going into Big Tens and to get some faster times to place higher going into prelims at Big Ten,” said Clifton.

Brett Pinfold laid claim to two pool records himself. He swam the anchor leg on the winning 200 free relay and also notched the pool record in the 100 backstroke with his split of 46.50 on the facility record-setting 400 medley relay (3:10.56) along with Clifton, Griffin Back and Harrison Tran.

On the women’s side, Chase Kinney led the way, posting three wins and two pool records to close out the regular season.

Seniors Maria Carlson and Tran also contributed to the Badgers’ dominating performance, each coming away two school records of their own.

Freshman Kevin Pomeroy laid claim to a pool record on the 3-meter board with his score of 355.58 points, topping a 14-year old mark.

“I just tried my hardest and that’s what happened, so I’m really happy,” said Pomeroy. “I’m really happy that I had the opportunity to do it at my home pool.”

Pomeroy took down the standard held by Timo Klami of Iowa since 2003 to seal the victory on the discipline.

The Wisconsin women will be back in action in two weeks as they travel to West Lafayette, Indiana, for the 2017 Big Ten Championships, Feb. 15-18.

“We know that the only thing we have to do now is rest,” Hite said. “It’s pretty simple: rest and get faster and we have gotten faster each time now, that’s the whole point. We’re in a spot where we can do what we want.

“We have our goals for Big Tens and NCAAs, so we’re in a good spot.”