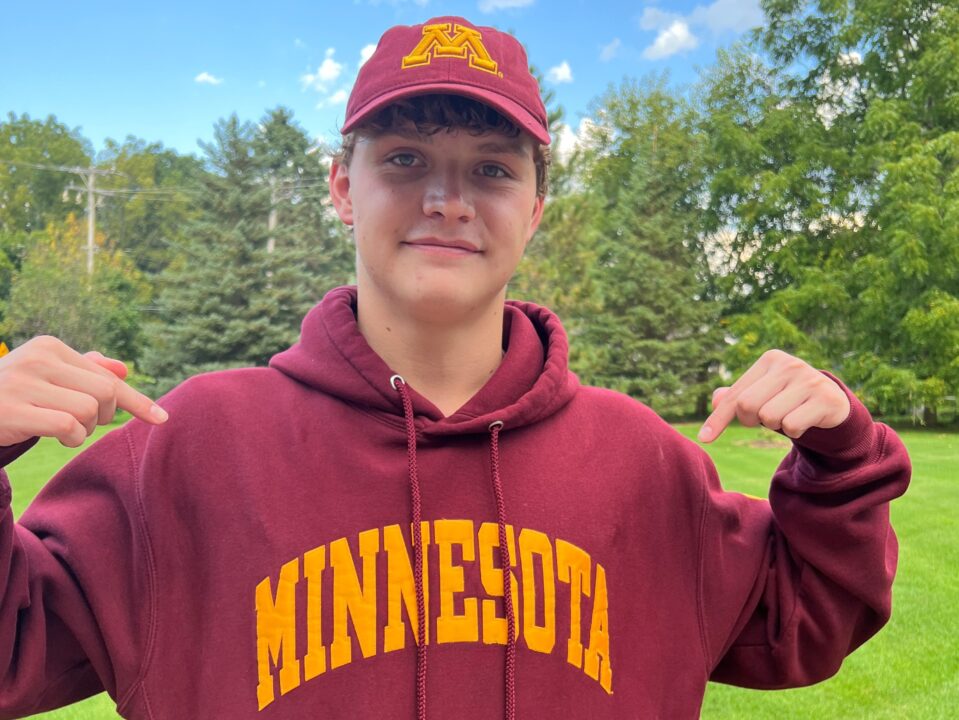 Tyler Hansen, a junior out of Oconomowoc, WI, has announced his verbal commitment to swim for the University of Minnesota beginning in the fall of 2024.

“I am excited to announce my verbal commitment to the University of Minnesota. I chose Minnesota because of their great academic and athletic programs. Go gophers!〽️”

Hansen has been steadily improving each year, making some of his most significant time drops at the 2022 WIAA Boys Division 1 State Championship. At this meet, he finished 3rd in the 500 free (4:33.15), which marked a 5 second improvement from his previous personal best. He also finished 4th in the 200 free (1:39.66), which, prior to this meet, marked a 2 second improvement.

Hansen has also shown himself to be a skilled breaststroker, making notable improvements in the last year alone. For reference, his best time during the 2020-2021 season in the 100 breast (SCY) was a 58.18, swum in December 2020. In a year, he improved that time by over 2 seconds, dropping a 56.02 at the 2022 ISCA International Senior Cup in April.

At the 2022 Big Ten Men’s Swimming and Diving Championships, the Gophers finished 7th of 8 teams, scoring 637 points. This meet was considerably smaller than it was in previous years, as Iowa and Michigan State cut their men’s programs. In the 500 freestyle, the Gophers’ best finisher was freshman Bar Soloveychik, who ended up 4th (4:13.85). He went on to finish 13th at the NCAA Championships (4:13.51).

Minnesota also had the fastest 100 breastroker in the country last year with Max McHugh winning the NCAA Championships in a 49.90. He was the second swimmer ever to be sub-50 in the 100 breastroke behind NCAA record holder Ian Finnerty and subsequently the only swimmer last season to be sub-50 seconds. Minnesota’s only scorers at this meet for the swimming portion were McHugh in the 100 breast (1st) and the 200 breast (2nd-1:48.76), and Soloveychik in the 500 (13th). Hansen has significant specialty overlap with these events, and will be joining a program that has had wide success at major NCAA meets across both genders for many years.

Hansen is a 2-time member of the USA Swimming Scholastic All-American Team, which requires a swimmer to attain a minimum 3.5 GPA and at least one individual time equal to or faster than a 2022 Winter Junior Championships qualifying time.

More from Max Latshaw
See All