“Why is my swimmer not being moved up a group?” 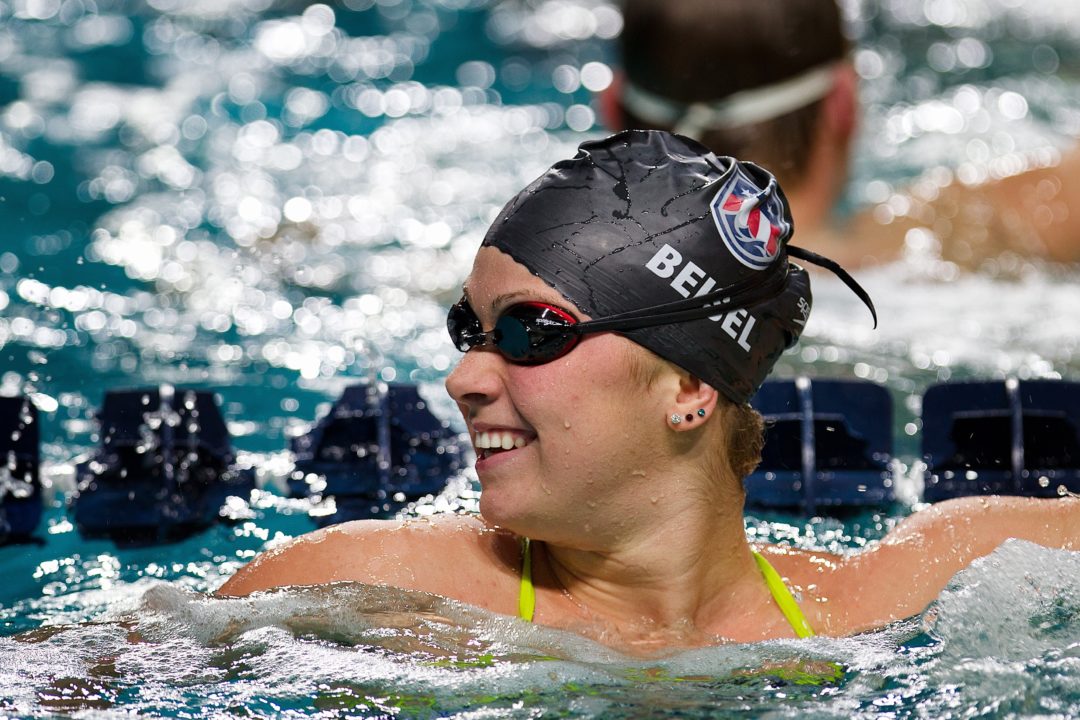 Here is a breakdown for swim parents who are curious about when their little swimmer will be getting moved on up to the next group. Current photo via Tim Binning/TheSwimPictures.com

The journey to your goals will be littered with adversity, struggle and failure. Here’s why you should be making sure that you are failing properly.

Give the Gift of a High-Performance Mindset This Year

Looking for the perfect gift for the elite-minded swimmer in your life? This mental training book will give the best gift of all–faster swimming.

“I Work Hard at Practice… But it Feels Like I’m Not Improving.”

Feeling like you are stuck in the mud with your swimming? Here’s a quick guide to getting unstuck and start moving forward in the water.

Unleash the Power of Self-Affirmations for Faster Swimming

Affirmations are a proven way to develop a mindset that allows swimmers to get the most of themselves in practice and on race day. Here’s how.

How to Use Training Goals for Supercharged Self-Confidence

Self-confidence comes from the training that you do each day in practice. Here’s how training goals can help you develop some serious self-confidence.

When Mary T. Meagher decided that she was going to break a world record, she focused on doing two things every day as well as she possibly could.

How Swimmers Can Use Visualization to Conquer Adversity

Visualization is a proven tool that swimmers can use to get better at dealing with tough situations. Here’s a three-step plan swimmers can start with today.

by Olivier Poirier-Leroy. You can join his weekly newsletter for competitive swimmers by clicking here.

There isn’t much that is more exciting than improving for swimmers.

And with young age group swimmers, this improvement is happening like crazy.

Personal best times tumble fast and furious thanks to a whirlwind combination of new skills, increased conditioning, and the natural strengthening and size that comes with sprouting like a weed.

This rush to progress is often felt by the swimmer who feels they have outgrown their group.

They look at the faster swimmers in the next group and know that they can compete and take on the enhanced demands of a more senior group.

But just because a swimmer thinks they should be moved up doesn’t mean it oughta happen.

For the swim parent who is curious as to why their kid isn’t zooming along to the next level on the team, here is a breakdown of what you need to know about your swimmer moving up a group.

Why and when a swimmer gets moved up

There are a few different reasons that a swimmer graduates to the next group. Some are critical (attendance, ahem), while others, like meet times, aren’t as important as one might think.

Here’s a breakdown of the common guidelines coaches use when considering to move a swimmer up:

Developmentally, it greatly benefits your swimmer to train (and socialize) with swimmers their own age. Swimmers of a particularly young age, 8 years old, for example, should be kept together.

As swimmers get older, age gets a little tricky, because a 17-year old who comes late to the sport will benefit more from training with people his own age than swimming with fast 12-and-unders.

But generally, it’s important to remember that coaches will coach for age, and not for ability.

When future Olympian Elizabeth Biesel walked onto the pool deck as a youngster, coach Chuck Batchelor of Bluefish Swim Club found himself coaching to her talent and ability, and not her age.

“She was so good at such a young age that I tried to coach her like I thought you should coach someone at that level without taking into account that she was 12 and wanted and needed to be 12,” says Batchelor. “After 6 months of that, I realized I needed to change things, and it improved our relationship and our results.”

This is about as basic a requirement as you can think of. Is the swimmer making all of their present swim workouts?

Of course, shoddy attendance can sometimes be explained by factors outside of the pool (they have a bike race, or were playing in a concert), but when they miss for the sake of not wanting to be there or poor time management that is a different story.

Attendance is an easy and subjective way to measure commitment. Senior groups require more commitment, so you could say that this is a biggie factor in determining whether a swimmer should advance groups.

Does the swimmer do the sets properly? Follows directions when instructed? Shows up on time and is a positive influence on the group?

How coachable is your little swimmer?

Ability and talent don’t count for squat if the swimmer is spoiling team culture or disrupting practices.

Coaches will be very resistant to reward a swimmer that resists instruction and negatively impacts the training environment by moving them up.

Keep in mind that the next group will require more from the athlete, which sets the uncoachable swimmer on a collision course with failure.

Proper stroke mechanics and understanding of the rules of the sport are important, but not a deal breaker when it comes to group advancement. But it is still a consideration.

Has the swimmer progressed technically to the point that they are where they need to be? Are they completing races and practices with technique, starts and turns that will not get them DQ’d?

Although the scoreboard and medals might tell you otherwise, meet times are not really as important a factor as most swim parents would think.

The results and what happens on race day acts as a limited snapshot of how your swimmer is doing in the water, but it doesn’t always reflect what kind of attitude and commitment the swimmer is showing at practice.

Where meet times can start to influence decision-making is when it comes to qualifying for higher-level meets. For example, athletes that have JO cuts or Olympic Trials cuts are more likely to train together, regardless of age.

Can the swimmer keep up with the next group? Will they be able to compete a little bit with the other swimmers in their new group?

Coaches operate at their best when the swimmers they coach are largely similar in ability and speed.

If one swimmer is far behind, in terms of skill or conditioning, this swimmer will require specialized training apart from the rest of the group, cutting instruction time for the other swimmers.

Time of the season.

In my experience, it’s rare that a swimmer will be moved up a new group mid-season. Most common are the end of the season, because a swimmer has qualified for an advanced meet their group-mates have not qualified for, the beginning of a new season, or after a championship meet.

The schedule of a move-up varies by team, how seasons are arranged, and other factors. Austin, Texas’ Waterloo Swimming, for instance, move swimmers up at “the beginning of the short course season and long course seasons.”

Check in with your coach and team for move-up requirements

Teams often have requirements for each group, from age to swimming ability (test sets, for example), so beyond believing that your swimmer is simply faster than their peers, inquire to the club about what is required for your swimmer to advance.

Talk to the coach.

Get an idea of where you swimmer is at, what the next group demands, and base your expectations from there.

Trust in the process

I can understand the anxiety and pressure to want to move up groups as fast as possible.

I was that kid.

Chomping at the bit, always wanting to get leveled up. I craved tougher competition in practice, and wanted the feeling of being “elite,” which is what I considered every group that was above me.

This desire is good, and will keep the swimmer hungry, even if it means they are feeling a little impatient at times. And no, your child won’t be getting left behind if they aren’t being rushed through the groups.

“We find in most cases that parents are very anxious to move their kids up to the next practice group,” says David Schreck, coach at NOVA of Virginia Aquatics. “And it drives me bananas. I am constantly urging parents to show patience and give the process more time. We move kids based on age, stroke, physical and emotional development. Sometimes, we’ll have a fast swimmer and let them be a leader in a group before we move them on.”

Make sure they are earning the reward

Ultimately, moving up a group is a reward and not an entitlement.

It’s an acknowledgement that the swimmer has excelled where they are at and are ready to level up.

It’s recognition that they can take on more.

“For me, progression has always been more about the desire to be the best and about commitment rather than ability,” adds Batchelor. “Moving (up) should be an exciting and rewarding process. The key consideration is what will this swimmer bring to and gain from the new group.”

One club had a year of birth requirement for its squads. We moved clubs.

Sometimes it can be none of these things. My kid has National times, met all the prerequisites for the national group, gets along with everyone, but the head coach will only move up the other coaches kids and their friends. Sometimes you only move by who you know and are friends with.

Totally agree. There is a lot more going on than the most deserving kid getting moved up. You need to be proactive. And just because they say “At this time the coaches do not think he meets the requirements for squad XYZ” does not mean it is actually true. You need to be able to assess your kid and figure out what is best for him or her. That requires quite a bit of time on your part. We moved clubs a lot and I can tell you it is the best thing we did. We are now in the best circumstance. This comment will get down-voted as it does not jive with the “trust your coaches” commentary. Their interests… Read more »

All said, it depends on the coaching acumen.