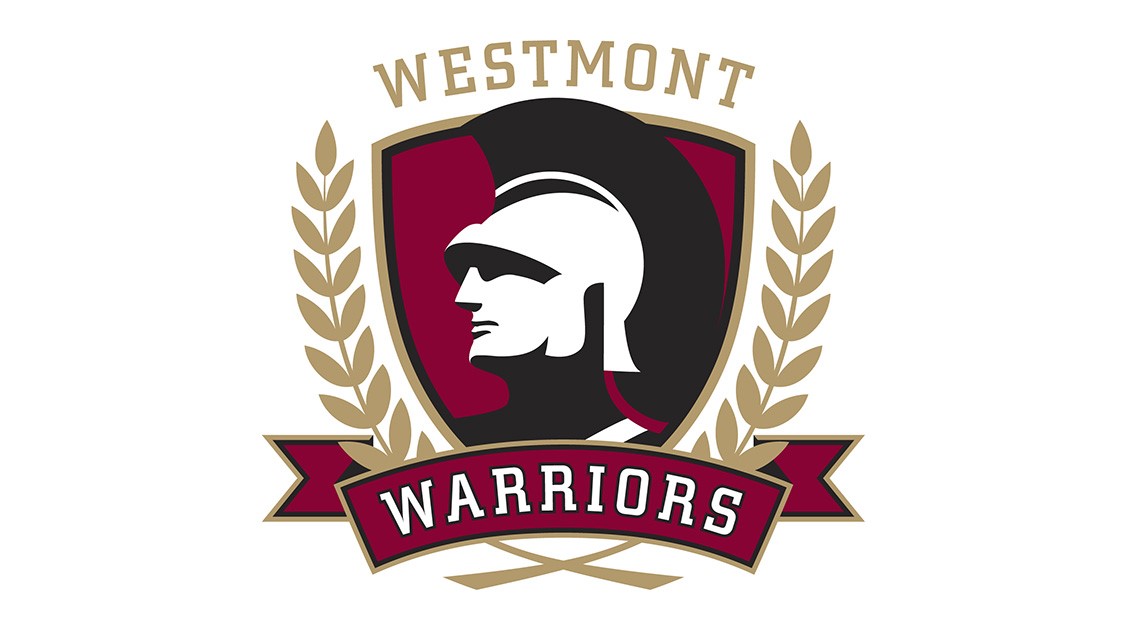 Westmont Women's Swimming had a banner showing on Friday, the first day of the La Verne Winter Invitational. Stock photo via Westmont Athletics 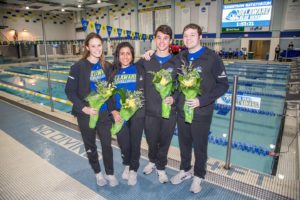 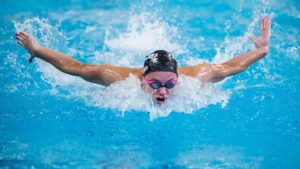 “They carried each other through some tough races. The excitement they had was contagious and you could see it permeate through the other races, they each wanted to contribute to the team morale by swimming their best.

“It’s pretty fun as a coach to go through a day of a long meet without a single bad race. All 13 of them stepped up and raced their hearts out.”

The event started with Morgan Bienias earning an automatic qualification into the NAIA National Championships in the 500 yard freestyle, posting a time of 5:20.90.

“That was the best way to start the meet this morning,” said Jones Lin. “She crushed the qualifying time for the 500 and along the way qualified for the 200 yard freestyle during the 500 – which means she was going really fast. Morgan had one of the best races I’ve seen so far this year. That race gave me a glimpse of what she is capable of and I’m excited to see what she can do the rest of the meet. That 500 was a culmination of a lot of hard distance sets, a lot of self-motivation and a lot of grit. It was a well-earned success.”

In the finals later on Friday, Bienias turned in an eighth place finish.

“The A Relay lowered their best time by six seconds with the B Relay dropping three seconds,” noted Jones Lin.

“The 200 individual medley was the most exciting event of the day with some major time improvements,” reported Jones Lin. “Allison, Olivia, Rian, Ceili, Emma, and Devyn dropped approximately 60 seconds combined and all got second swims in finals.  Rian improved her time by just under a second in the finals, missing the national cut by 1.5 seconds.”

In the 50 yard freestyle final, Lemmon placed fourth overall. Lemmon had previously posted an NAIA qualifying time and did so again on Friday with a time of 24.67. Hynds placed 16th with a time of 26.08.

Gonzalez was allowed to compete in the third heat of the 50 yard freestyle finals when another swimmer scratched. Though she entered the third heat with the slowest prelim time, she won the heat from lane one to place 17th overall and pick up an additional eight points from her seed.

Lemmon, Lewandowski, Bienias and Hynds finished the 400 yard medley relay with a time of 4:14.93, nearly 30 seconds faster than the NAIA qualification time. Lemmon led off the event with the 100 yard backstroke and recorded a time of 1:01.26 to also qualify for nationals as an individual in that event.

“I’m excited for day two,” said Jones Lin. “It’s going to be a battle with a lot of back-to-back races, but we are going to carry the momentum from day one and leave it all in the pool. We are 20 points behind La Verne and hoping to gain some ground on them tomorrow.”