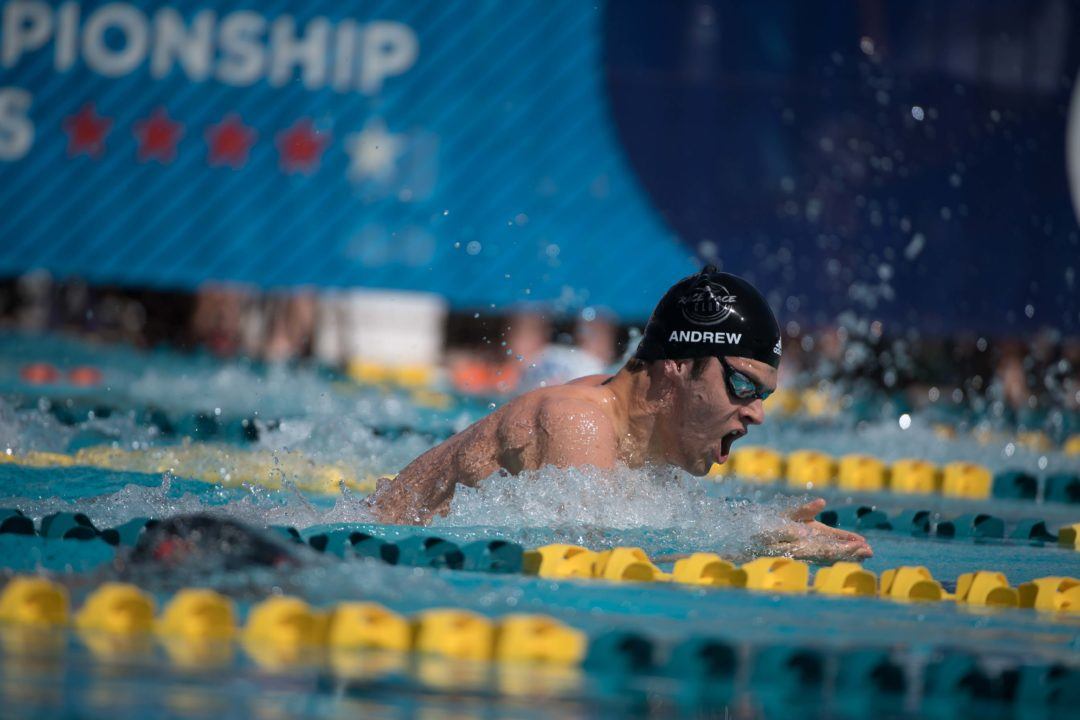 While competing at the Singapore stop of this year’s World Cup series, reigning short course 100m IM world champion Michael Andrew lowered his own World Junior Record in the event. The 18-year-old crushed a new personal best of 51.65 to earn silver behind Russian Vlad Morozov, while outperforming his own previous career-fastest of 51.84 that won him the world title in Windsor.

In both his Windsor race and tonight’s event in Singapore, Andrew took out his opening 50 in identical marks of 23.57. The difference came on the back half, where the Kansas native was able to drop .19 and earn a split of 28.08 tonight compared to the 28.27 he registered last December.

Catch how the entire race unfolded in the video above, courtesy of Michael Andrew‘s YouTube channel. Winning the race in Singapore was Russia’s Vlad Morozov, who clocked 50.49 to come within .19 of his own World Record time of 50.30.

Andrew’s 51.65 checks the teen in as the 14th fastest performer in the event of all-time, tying China’s Wang Shun. When looking exclusively at Americans, however, Andrew now slides into the spot as the 2nd fastest performer ever, sitting only behind Ryan Lochte and his 50.71 from Istanbul. Andrew’s time tonight ties legendary swimmer Michael Phelps‘ mark of 51.65 from 2011 as the #2 fastest U.S. performer of all-time.

Absolutely horrendous to look at…. What horrible, rigid technique the boy has!

MA with 40 comments! The excitement he creates, pro or con is great for the sport and great for his sponsors!

Bring on the downvotes. I hate hating on Michael Andrew and have even posted about it. But I’m tired of hearing about his 100 IM. We know he’s good at it. Have a great race in something that isn’t an event for 12 and unders and I’ll get excited.

But for real I think a lot of us share your thoughts on the 100 IM,

Times are cool but making the actual world champs roster would have been cooler.

this comment is so unnecessary…. the comments are light years better than they were two years ago.

I was actually thinking his arms had opened up a little bit, still very cramped given how big he is but it seemed slightly better here. It could have been the angle of the video as well, because it does look much worse looking at it head-on than from the side

No. I have a right to say what I want– sorry bud, that’s how free speech works.

Lmao literally no one is claiming otherwise, Prof.

When you’re done with your breath-holding, let us know.

You should spend more time reading up on how free speech actually works. Go ahead and email me when you have done so, and I’ll consider unblocking you. For now, you’ve committed multiple violations of our commenting policies, so we’ve decided you need a break from commenting.

This was my SCY time back in the day!

If he were to go just a bit faster, he could have beaten Vlad Morozov

and if Vlad were to go a bit faster he would have broken his world record, crazy how swimming works

YOU, on the other hand, are mistaken.