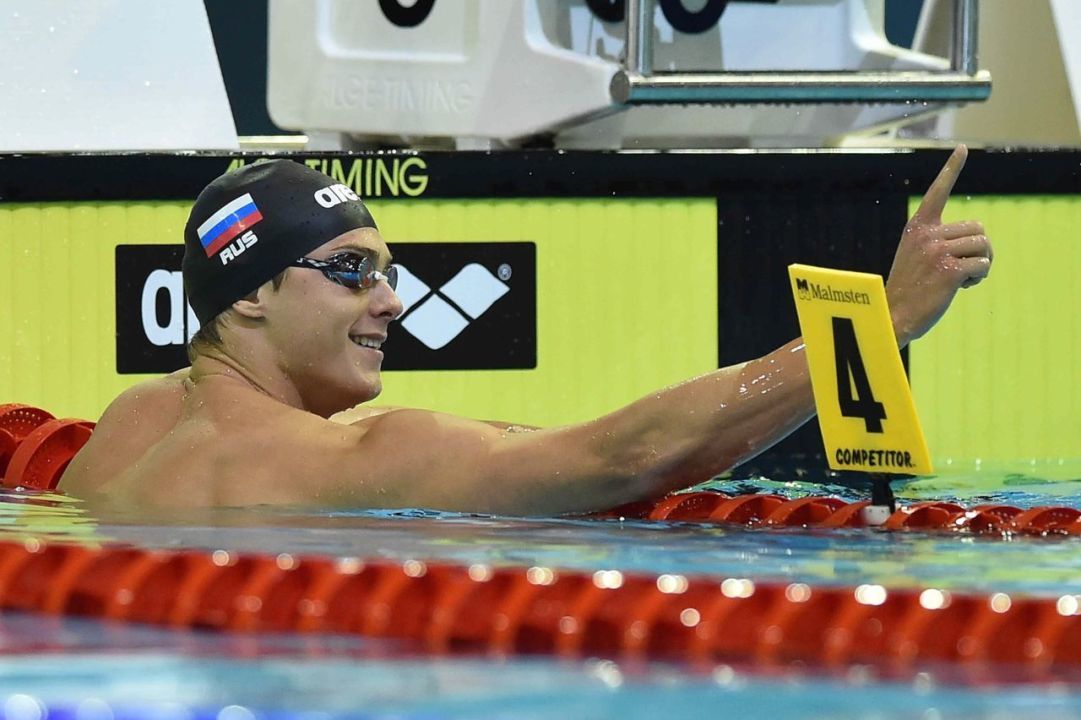 For the second consecutive weekend, Russia's Vladamir Morozov has broken the world record in the 100 IM in the FINA World Cup series. Archive photo via Arena International

For the second consecutive weekend, Russia’s Vladamir Morozov has broken the world record in the 100 IM in the FINA World Cup series.  Last weekend in Chartres, France, Morozov shaved 0.06 from the world record (previously) held by Germany’s Markus Deibler and blew away the rest of the field by over a second.  This evening in Berlin, Morozov lowered the mark by another 0.3 to clock a 50.30, finishing just over a full second ahead of silver-medalist Hiromasa Fujimori of Japan (51.33).  Germany’s own Philip Heintz took bronze in a 51.81, well ahead of Team USA’s Michael Andrew who took 4th with a 53.80.

Now having broken the world record twice in this event in the same World Cup circuit, Morozov takes an even more commanding lead, as world records are awarded with a $10,000 bonus, earning Morozov a cool $11,500 for a quick 50.30 seconds of work (1st-place finishes are worth $1,500).  Having also won the 100 freestyle in Berlin, Morozov’s individual earnings for the second meet on the circuit sit at $13,000, with the 50 freestyle yet to come tomorrow.

This coming weekend Morozov will swim on home turf in Moscow, where he will be the undisputed favorite should he swim the 100 IM again.  If Morozov comes away as the men’s leader through these first three stops on the World Cup tour, he will earn another $50,000 for the first three meet “cluster” of the nine-meet circuit.

Morozov’s splits tonight in Berlin compared to last weekend in Chartres, as well as his previous best time from 2014 and Deibler’s previous world record, also established in 2014, are below:

Morozov’s first 50 was much faster than previously, and his second 50 was almost identical to his swim last weekend in France.  With a 0.63 reaction time Morozov was the first off the blocks, leading the race from start to finish in every way possible.  Fujimori’s second 50 meters was almost as fast as Morozov’s (27.66), though his front-end speed through the fly and the back were not nearly enough to match Morozov.

The next stop on the FINA World Cup circuit will be in Moscow, Russia, September 3rd and 4th, and will cap off the first three-meet cluster of the World Cup.

Morozov “drug cheat”
There’s nothing else to it. He used drugs, who knows what. No one knows if he is still using…
He has multiple positive tests hidden, yet here he is competing like nothing happened. FINA are useless.
Let’s just open it up and let everyone take whatever they want

Man, are you serious? So you want to say, that American Anti-doping Association is corrupted?

Give your self-righteousness a break, dude. Check the facts. Take a deep breath and just chill.

Morozov is raking in the cash at these meets

MA taking it on the chin at this meet.

I am sure he is having fun but as a professional, he isn’t making ANY money.

He slaughtered that world record and made beef jerky from it