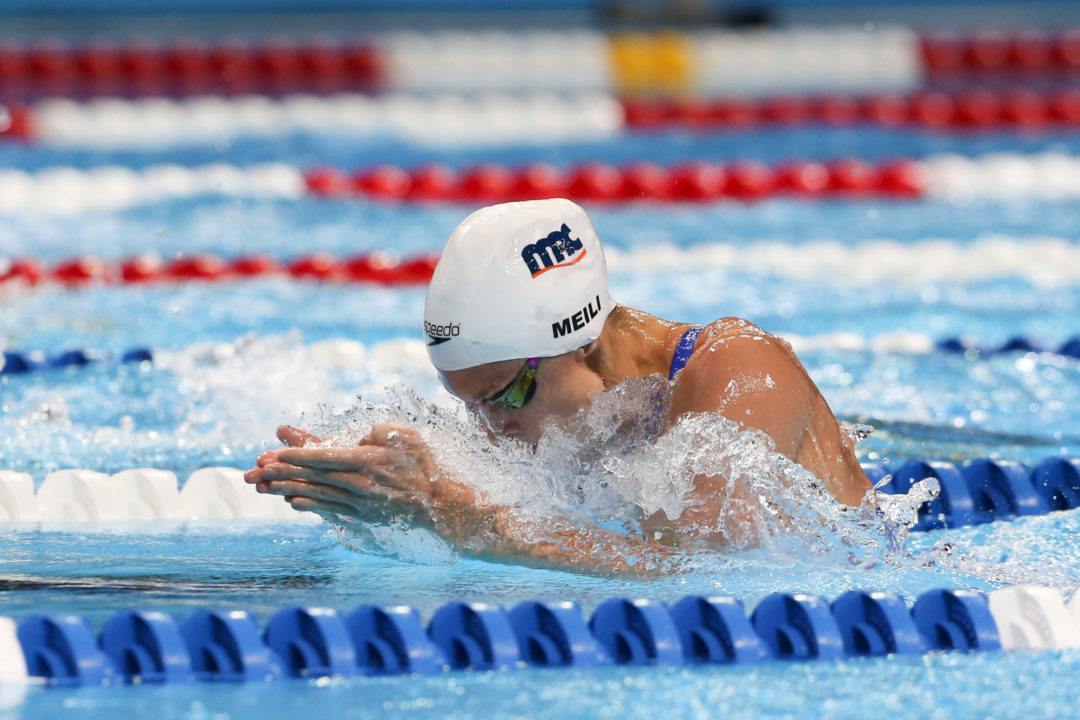 When is the fastest swim ever done by an American not considered the American record? There are currently 8 such swims on the books, courtesy of a unique rules anomaly. Archive photo via Tim Binning/TheSwimPictures.com

On Tuesday, August 30th, Katie Meili set the American Record in the 100 SCM breaststroke at the FINA World Cup meet in Berlin. Meili broke the record by just over a tenth of a second, touching the wall in 1:03.20. There is, however, a catch- she is not the fastest American to ever swim the event. That distinction belongs to Rebecca Soni, who swam a 1:02.70 in 2009- a half second faster than Meili’s new record.

2009 was a turbulent year for the world of swimming- the polyurethane swim suit was cause for massive controversy. Soni’s swim, from the 2009 Duel in the Pool, came at the end of the year. FINA had not officially banned the suits, while USA Swimming had. This meant that Soni’s time, along with any swim by an American in the polyurethane suits, could not count as an American Record. It could, however, get registered by FINA as an official time. This wrinkle in time cause seven more top American times to not count as American Records, not including Meili’s recent record.

Seven of the fastest American swims do not count as American Records- all short course meter, and all set at that same 2009 Duel in the Pool meet in Manchester.

This is a little off topic, but I can’t wait to see Ledecky race SCM and destroy the 400 record.

Do we have any idea that she will ever?

Yeah, I would love to see Ledecky take a shot at SCM records while she is in her prime. I wonder when she will do so? I am guessing she will be swimming mostly SCY due to college.

I think Katie Ledecky has more important unfinished business in LCM.
1. She is probably the only women during last 40(!) years since Shane Gould and Shirley Babashoff who was awarded Olympic medal as 100, 200, 400 and 800 swimmer. The next step is to have world records from 200 through 1500. It looks like she won’t have competition at this area since Sjostrom hasn’t shown any progress at freestyle since 2014. The only possible suspect is Oleksiak who made 1:55 split in Rio.
2. 400 IM. Hosszu will be 31 in Tokyo and there is no young swimmer on horizon who will be strong at this distance. Since 400IM comes at the end of WC I would… Read more »

Interesting points! Just one quibble: Sjostrom’s Rio time was a PB, progress by any measure.

My quibble stands. sorry. Changing your methodology on the point that doesn’t fit your claim doesn’t hold. A PB is a PB.

As you said, Scott: “A PB is a PB”. It is hard to argue against this unshakable fact. But I wasn’t talking about PB. I just said that Sjostrom wasn’t faster in Rio than she was in Berlin. Compare her splits to understand why I’m stating that.

Overholt in the IM? She was 432 mid in Kazan for bronze and still only 18 years old

Agree. So there will be strong competition around 4:29, 4:30 at 400IM. Bosses will definitely bonuses back to this level.