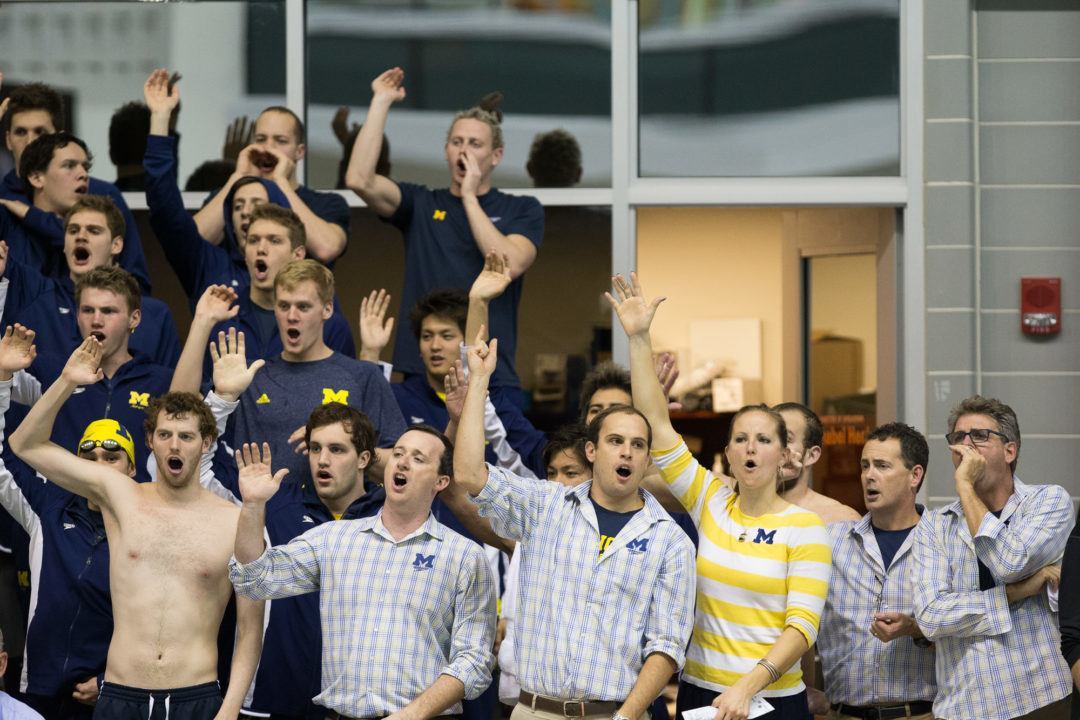 Kristy Brager will jump across Big Ten coaching staffs, moving from the Iowa Hawkeyes to the Michigan Wolverines. Archive photo via Tim Binning/TheSwimPictures.com

Kristy Brager will jump across Big Ten coaching staffs, moving from the Iowa Hawkeyes to the Michigan Wolverines.

Michigan announced the move last week, filling out a coaching staff that will have a couple of new faces in 2016-2017.

Brager fills the spot vacated by Danielle Tansel, whose husband Byron was named the new assistant at LSU this offseason.

In addition, Mark Hill left the program to move into the club realm. He was immediately replaced by Sam Wensman.

Brager has plenty of experience in the Big Ten: she spent 4 years coaching at Iowa and was a four-year letterwinner with the swimming program at Wisconsin prior to that.

ANN ARBOR, Mich. — University of Michigan head swimming coach Mike Bottom announced on Friday (Sept. 2) the addition of Kristy Brager to the coaching staff after a four-year stint at the University of Iowa. She replaces Danielle Tansel, who left the program after her husband, Bryon, accepted a coaching position at LSU.

“Kristy understands how competitive the Big Ten can be, as she’s been a part of it both as a student-athlete and a coach,” said Bottom. “She’s a great addition to our program and we can’t wait to have her on deck with our student-athletes.”

“I want to thank Mike Bottom, Rick Bishop and Bitsy Ritt for giving me the opportunity to work with such an amazing staff, team and athletic department,” added Brager. “Michigan is consistently one of the top swimming and diving programs in the country and has an incredible tradition of excellence. I’m excited to be a part of that and can’t wait to get the season started!”

At Iowa, Brager worked closely with the breaststroke and individual medley swimmers. Several swimmers excelled under Brager’s watch: Emma Sougstad earned a Top 50 world ranking in the 50-meter breaststroke and set four individual school records, while Roman Trussov was a three-time individual qualifier for the NCAA Championships and was runner-up in the 100-meter breaststroke at the 2016 Big Ten Championships. Additionally, both swimmers were NCAA All-America honorable mentions in 2016. She also served as women’s recruiting coordinator.

Prior to Iowa, Brager spent two years as an assistant coach at George Mason (2011-12). She graduated from the University of Wisconsin-Madison in Dec. 2008 with a degree in economics. She was a four-year letterwinner for the Badgers (2005-08), serving as team captain as a senior and twice earning Academic All-Big Ten recognition (2007-08)

I was so hoping Emily Brunemann would be the new assistant at her alma mater.

Great hire – personable and knowledgeable. She’ll be a great addition.

Good for her! Staying at Iowa would be a career “death sentence”. The Michigan administration is much more interested in the betterment of ALL of their sports programs. In contrast, Iowa does not seem to be too invested with the exception of a few of their programs- ie football, basketball, wrestling, and baseball.