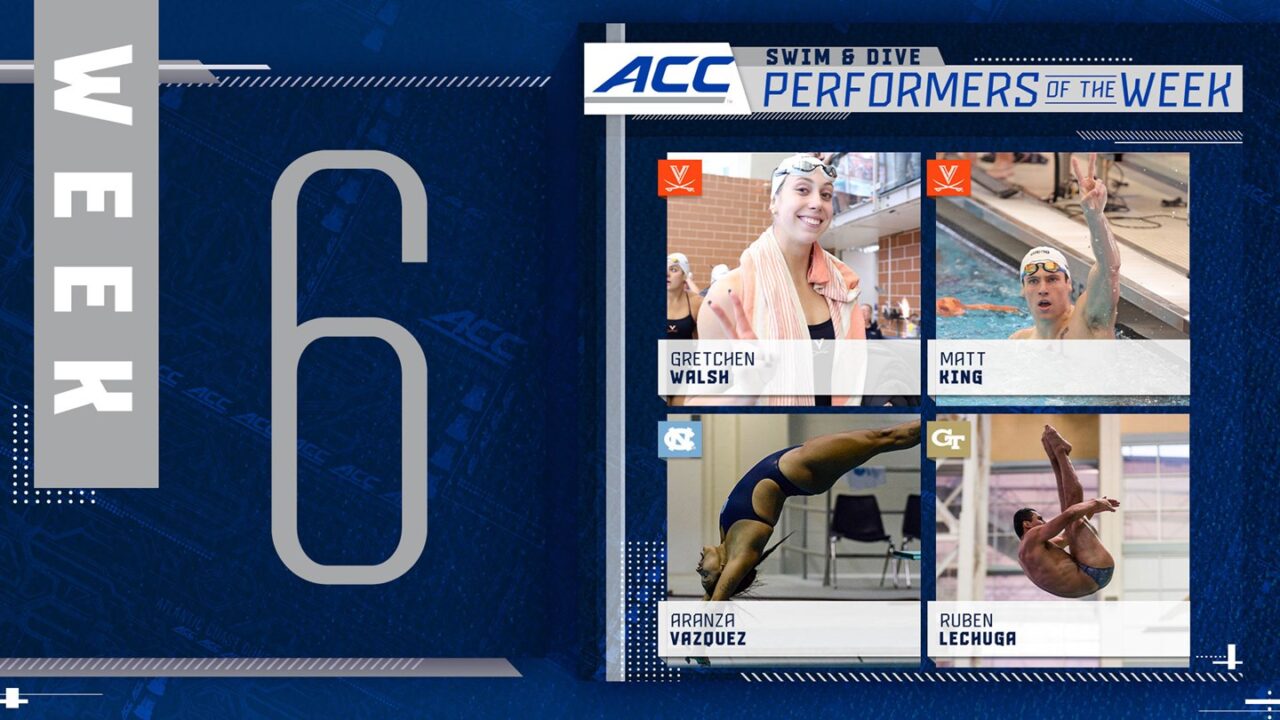 UVA swept the Atlantic Coast Conference Swimmer of the Week awards with Matt King and Gretchen Walsh named the ACC Men's and Women's Swimmers of the Week. Current photo via The ACC

GREENSBORO, N.C. (theACC.com) – Virginia swept the Atlantic Coast Conference Swimmer of the Week awards with Matt King and Gretchen Walsh named the ACC Men’s and Women’s Swimmers of the Week. Georgia Tech’s Ruben Lechuga earned the ACC Men’s Diver of the Week for the third time this season and North Carolina’s Aranza Vazquez collected her second ACC Women’s Diver of the Week award of the season.
ACC MEN’S SWIMMER OF THE WEEK
Matt King, Virginia, Jr., Snohomish, Washington
King holds the third-fastest time in the NCAA this season in the 100 free, earning a ‘B’ zone time with his first-place mark of 42.46 in No. 9 Virginia’s meet against No. 2 Texas. He was also a part of the 200 free relay that won first place in 1:17.07, a NCAA ‘B’ cut time, and currently the fastest finish in the country this season. The junior added a 3:06.33 NCAA ‘A’ zone time in the 400 medley relay that placed second against the Longhorns. King was also a part of the first-place mixed 400 free relay in 2:58.50 that also featured ACC Women’s Swimmer of the Week, Gretchen Walsh.

ACC MEN’S DIVER OF THE WEEK
Ruben Lechuga, Georgia Tech, Sr., Tijuana, Mexico
Lechuga swept his two diving events, scoring a 388.95 in the 1-meter and a 416.70 in the 3-meter. Both marks earned zone scores in the Yellow Jackets’ tri-meet win over Pitt and Boston College. His 3-meter score currently sits as the fifth highest in the NCAA this season.

ACC WOMEN’S DIVER OF THE WEEK
Aranza Vazquez, North Carolina, Jr., La Paz, Mexico
Vazquez won the 3-meter event for the second straight meet scoring a 351.00 as the No. 17 Tar Heels took down No. 23 South Carolina. She scored over 300 points in both events, adding a zone score of 312.00 in the 1-meter.