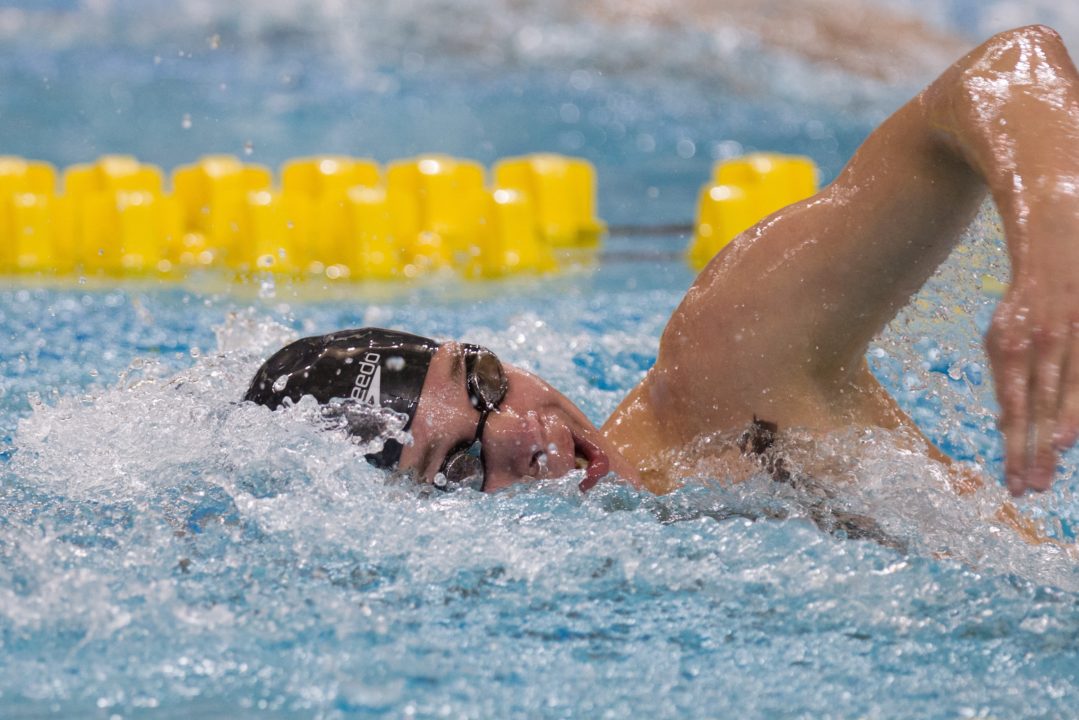 As expected, Virginia started making their move on Thursday morning with the 500 free, including the top seed from Jon Daniec. (Stock Photo Courtesy: Tim Binning/TheSwimPictures.com)

A great early-heat 4:20.09 from Florida State’s John Jessell held up as the top morning time until Virginia’s Jon Daniec leap-frogged him with a 4:18.99. Those two will be the top two seeds in tonight’s final, with Daniec having already gone faster than he did for second-place at last year’s meet.

Virginia freshman Nick Alexiou followed up his great relay leadoff last night with a 4:20.63 for third, followed by teammates Bradley Phillips (4:20.70) and Parker Camp (4:20.73).  Virginia Tech snuck one into this A-Final as well, with Michael Szuba placing 8th in 4:21.33; behind two North Carolina swimmers. With that top 8 all crammed in a span of just over two seconds (even tighter for 2nd-7th) this is a race that should see a whole lot of jockeying for points in tonight’s final.

Now we know why Florida State was so excited about Pavel Sankovich’s mid-season addition from Belarus. He’s not just a backstroker; after carrying the Florida State 200 medley to a victory on Wednesday, he took his first individual swim to a 1:43.77 in the 200 IM. That’s just four-tenths from the Meet Record held by the great Gal Nevo, and is a Florida State school record by over two seconds.

I don’t know if anybody is prepared to catch that swim in tonight’s finals, though there were very good performances from Virginia Tech’s Greg Mahon (1:45.62 – three second season drop) and North Carolina’s Tom Luchsinger (1:45.91 – eight second season drop), as well as a handful of others to scoot into the A-Final. North Carolina is showing more depth than expected early on, which is a good sign for them.

As for how this outcome is going to affect the team battle: Virginia had three in the A-final, in the bottom-half of it but easily within reach of moving up, to Virginia Tech’s one. Tech had three in the B-Final, however, to supplement.

This 50 free prelim maybe wasn’t as fast, top-to-bottom, as we would have expected here, but there’s still plenty of big names who we can expect to get a little faster in the final. The top two seeds, not surprisingly, when to Florida State’s Paul Murray (19.34) and Mark Weber (19.42), with North Carolina State’s Jonathan Boffa just behind them (19.55).

Tom Barrett was Virginia’s lone A-finalist in this race, taking 4th in 19.70, followed by Georgia Tech’s Andrew Kosic in 19.74 (he was an 18.6 on the medley relay). Virginia Tech’s Zach McGinnis, who had four strong events to choose from, took this 50 free as number three, and made the A-final in 19.90. His teammate Joe Bonk just missed, and will be the top-seed in the B-Final in 19.95.

It is Virginia’s meet. You have to take advantage of your advantages…UVa did that in the 500. Nobody punched them back with relative pain in the 50.

Once this meet gets into events like the 200 strokes and long IM and mile UVa is about as subtle as a hammer on a penny nail. Game over.