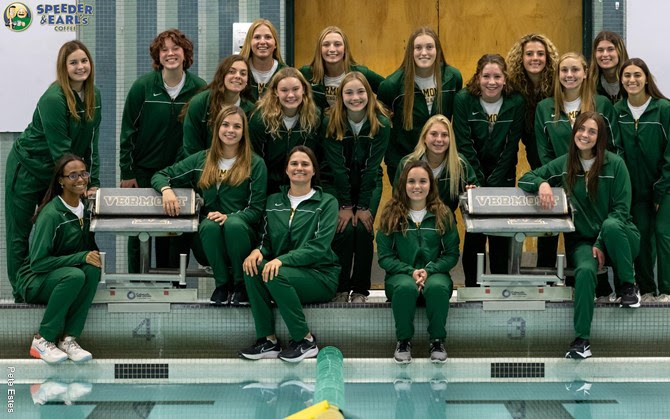 The Catamounts are home for the first time this season as they host New Hampshire in their America East Spread Respect meet Saturday. Archive photo via Pete Estes

The Catamounts are home for the first time this season as they host New Hampshire in their America East Spread Respect meet Saturday. Vermont’s meet with their conference rivals will begin an 11 a.m. with one-meter diving followed by the rest of the meet at 1 p.m. All of the action will be streamed live on AmericaEast.TV.

America East’s Spread Respect initiative raises awareness to ensure equality and safety for all student-athletes, coaches and fans without regard to race, ethnicity, religion, sexual orientation or gender identity.

First year swimmer Jackie House was named the America East Swimmer of the Week on October 6. In her first collegiate meet at Army West Point she won the 200 free and the 500 free. She was also a part of the 400 free relay team that closed out the event with a win over Army and Binghamton with a time of 3:35.78.

House is the first Catamount to be named America East Swimmer of the Week since her teammate Mina Poppas earned the honor on January 14, 2020. Poppas was also the last first year to earn the honor for the Catamounts.

FIRST TIME FOR EVERYTHING

First year Ella Church won the first race of her collegiate career taking the 1000 free at Army West Point with a time of 10:28.84. She beat the field by 18.52 seconds and it was the first time in her swimming career competing in the event.

FRESH FACES ON THE POOL DECK

18 of the Catamounts 41 student-athletes this year are first years at the University of Vermont including five divers.

Saturday will be the Wildcats first meet of the 2021-22 campaign. Last April, The Wildcats won their league-record ninth America East Championship in program history. UNH won 15 of 18 events and Head Coach Josh Willman and his staff were named America East Coaching Staff of the Year.

Last season the Wildcats defeated Vermont 171.5-67.5 in the season-opening meet for both teams on February 20 from Swasey Pool at UNH.

The University of Vermont is now requiring anyone in a campus building to wear a face covering – regardless of vaccination status. The policy went into effect on August 5 to aid in protecting our community from the spread of COVID-19. In order to ensure the safety of students, staff and the community, UVM is now also expecting that all vaccine eligible visitors to campus, including fans attending athletic events, will be fully vaccinated.

Due to the ongoing health and safety protocols, no outside food will be permitted but fans are allowed to bring a reusable water bottle (maximum size 2 liters). Our policy will be reevaluated as circumstances evolve.