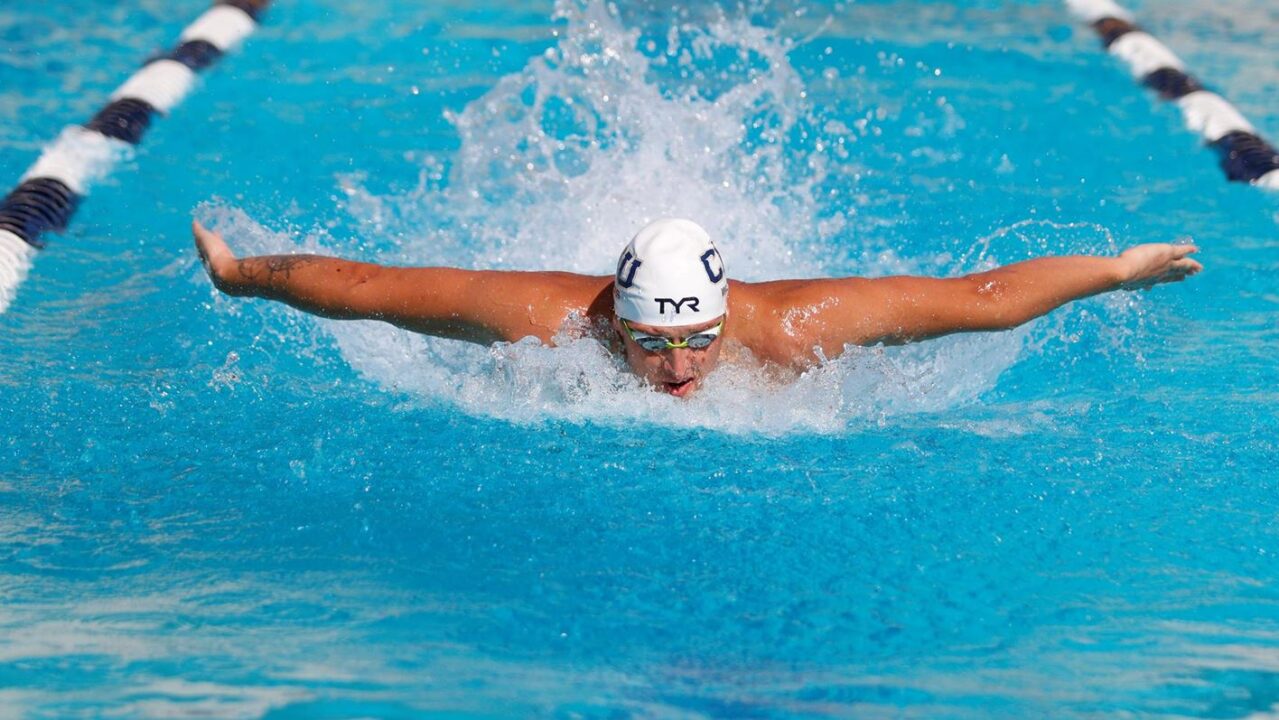 RIVERSIDE – The California Baptist University swim teams finally got their season underway on Thursday afternoon, hosting and defeating Seattle U and the University of San Diego women in the 2021-22 home opener. The women took down both challengers in their double-dual meet, topping the Redhawks 221-73 while downing the Toreros 220-80. The men took on the Seattle U men head-to-head, defeating the challengers from the Pacific Northwest by a score of 225-69.

DIVE
One of the first marks to be rewritten came in the opening round of the women’s dive competition when Kiree Lowe posted a score of 310.73 on the 3-meter springboard. That not only broke the previous record, but did so by nearly 20 points, making it the first 300-plus point effort in program history.

Three other Lancers joined Lowe in the top-five of the event as Paula De Moya Alvarez took second (269.18), Madison Liu took fourth (223.65), and Lillian Choi rounded out the group in fifth (204.98). Freshman de Moya etched her name in the CBU history books in just her second meet ever as her number vaulted her into eighth place on the all-time 3-meter list.

Lowe and de Moya Alvarez kept that record pace going in the 1-meter competition as Lowe improved slightly on her personal best in the event with a winning score of 260.70, just topping her previous mark of 260.40 to edit her seventh place spot on the list. Paula de Moya Alvarez took third on the day with a score of 252.75, which also landed her on the all-time list in 10th place.

The men competed amongst themselves as neither SU nor USD field a men’s diving team, but the lineup of Evan Honer, Tyler Stevens, and Jacob Penman still produced highlight performances. Honer set the tone as top-scorer in both events, improving his personal best mark in the 1-meter with his score of 355.28, before carding a 357.83 in the 3-meter.

Senior Tyler Stevens set a new high point mark for himself in the 3-meter event where he had his best showing of the day, notching a 319.20. The result improved on his previous best of 315.45, remaining in seventh on the all-time list. Penman recorded a new personal best on the 3-meter board as well with his score of 272.78.

Sophomore Faith Brazil swept her two events, claiming the top times in the 100 and the 200 breaststroke at 1:05.94 and 2:21.23 respectively. Rebeca Oviedo, the current CBU record holder in the 200 free, began the season with a win in her signature race, finding the wall in a time of 1:56.45.

The Lancers return to the pool less than 48 hours after the opener as they are set to host UNLV and Pomona-Pitzer at the Lancer Aquatics Center at 1:30 p.m. on Saturday afternoon.