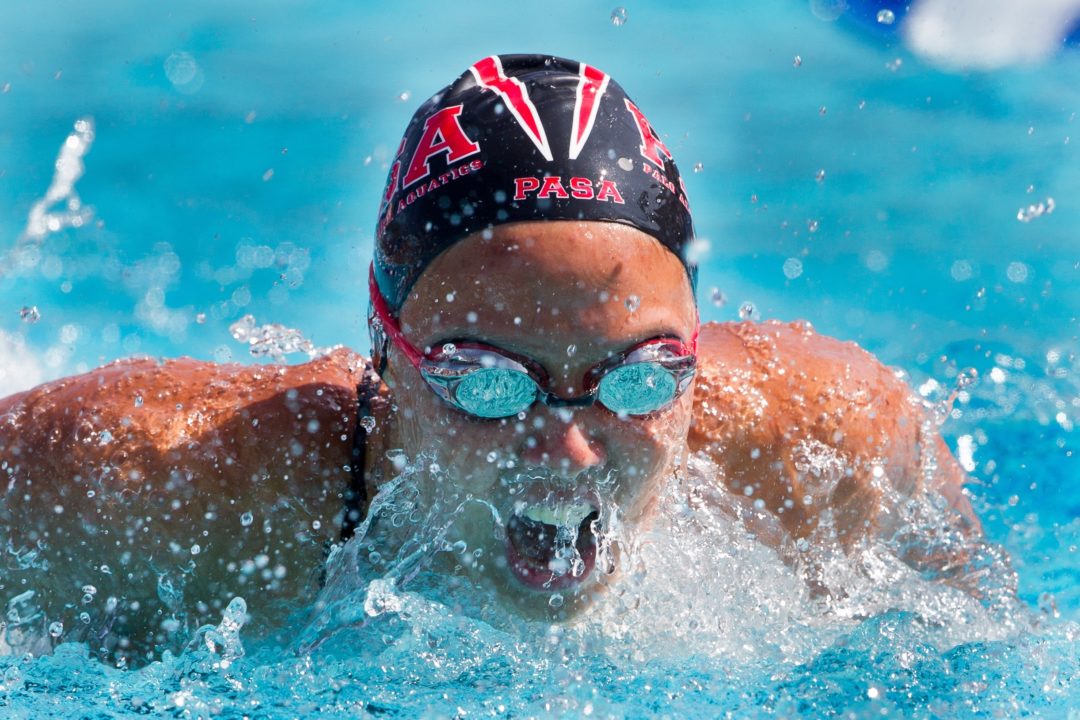 This past weekend, SMU hosted their annual SMU Classic meet that pits small, elite groups from different teams around the country in a unique invitational format; this year’s meet featured 6 teams, all of whom finished in the top 25 at last year’s NCAA Championships, including NO. 3 USC, North Carolina, Florida, Texas, Louisville, and the hosts SMU.

The meet was won by the USC Trojan women, though the format of the meet kept the scoring relatively close. In this meet, each team enters only two swimmers per event: one goes straight to the A-Final, and one goes straight to the B-Final. The USC Trojans and North Carolina Tarheels were both suited up for the affair, resulting in some pretty quick early-season times for both.

The swimmer of the meet was USC freshman Jasmine Tosky, who is already making a huge impact in her first college meet. In four individual swims, she set two Pool and three Meet Records.

That began in the 200 free, where she swam a 1:45.14 that is the best time in the country. For anybody who was concerned that Tosky, having accomplished so much as a junior swimmer, might be tapped-out: this swim is multiple seconds faster than Tosky has been prior to a natural “taper meet” like Sectionals or Winter Nationals. Salo’s swimmers often swim fast in season, but this time is fast enough to be encouraging regardless.

The North Carolina women are shaping up to have a great 800 free relay this season, as A-Final runner-up Danielle Siverling (1:45.90) and B-Final winner Stephanie Peacock (1:46.65) now rank 2nd and 4th in the country. That set up a great matchup in this meet, where Tosky was joined by Stina Gardell, Haley Anderson, and Meghan Hawthorne, while the Carolina girls included Lauren Earp and Cari Blalock. The Tar Heels outswam the Trojans on three of the four legs, but a 1:48.32 from Anderson on the 3rd leg against a 1:50.33 from Blalock was enough to give USC the win 7:10.45-7:10.98. UNC had Katie Nolan on this relay at NCAA’s last year, so if she’s swimming well at NCAA’s, this could be a top-5 relay.

The other USC swimmer who had a great meet was junior Kasey Carlson. She won both the 50 free in 22.65 and the 100 free in 49.05, and also tacked on a win in the 100 breast in 1:00.20 (the 2nd best time in the country this year). She ended up only grabbing 7 individual points at NCAA’s last year, but if she can continue to swim this well, she’ll at least triple that this season (and the Trojans will need it, too).

The runner-up in that 100 breast was Texas’ Laura Sogar in 1:02.12. That time is just sort of a solid early-season time, nothing spectacular, but it was her 200 breaststroke that really shone here. In that race, she won in 2:10.98, which almost would have made the B-Final at NCAA’s last season. That 200 is the event she’ll swim at the Short Course World Championships in December, and she looks on-point so far.

In the IM races, USC’s Hawthorne, now emerged along with Stina Gardell from the shadow of NCAA Champion Katinka Hosszu, twice outraced Florida’s Olympian Elizabeth Beisel. The first time came in the 200 IM, where Hawthorne was a 1:58.80 to Beisel’s 1:59.69. Gardell, in winning the B-Final, was a 1:59.15.

In relay action, a really interesting result was the women’s 200 free relay. There, it was the Florida Gators who won in 1:32.84, with Texas 2nd in 1:33.06 and USC 3rd in 1:33.09. Florida struggled to put together their sprint free relays last season (for example, they had to use 200 butterflier/backstroker Teresa Crippen at NCAA’s in this same event – and she did well, but still not an ideal situation).

This year, with freshmen Natalie Hinds and Lindsay McKnight jumping into the quartet, they already look like they’ could see a big upgrade this season from their 12th place finish in the relay at NCAA’s last season.

Congratulations to the Women of Troy! Lots of good competitors at this meet so you really showed your stuff! Meanwhile your teammates back in LA took care of USD and NC State. Fight On! Great swimming for this time of year!