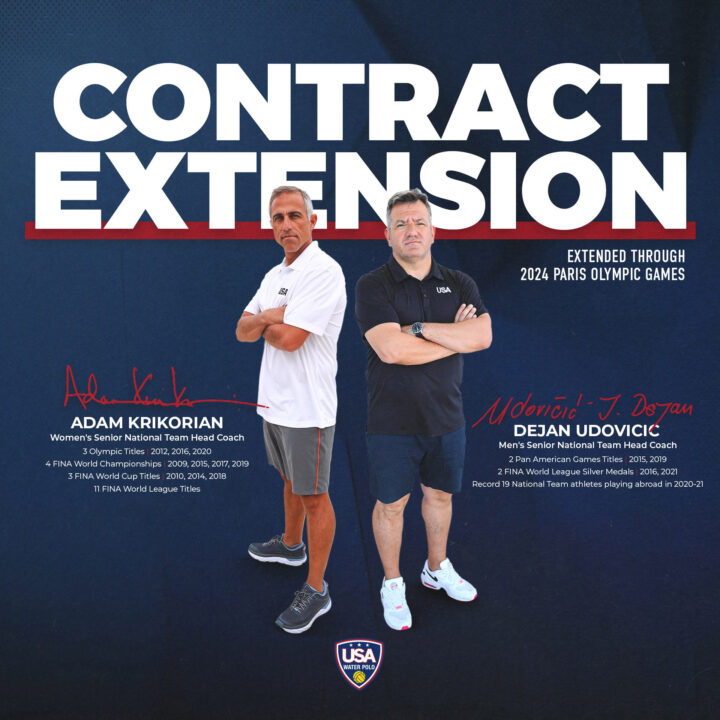 With the Paris 2024 Olympic Games less than three years away, the two coaches will look to build from the results of the Tokyo Olympic Games. For the USA Women, a record third-straight Olympic Gold Medal—an unprecedented feat in women’s water polo. For the USA Men, a sixth-place finish, equaling their second-best mark over the last 25 years.

“USA Water Polo is excited to announce the return of our two National Team head coaches. Stability is important in team building, and keeping the leaders of our programs intact will only help build from the efforts of the last quadrennial,” said John Abdou, USA Water Polo Chief Sport Performance Officer.

Abdou continued, “It’s a great privilege of mine both professionally and personally to continue to work with Adam and Dejan. Professionally, they are experts and leaders in their field and deeply tied into our game internationally. Personally, they are men of integrity and character who have taught me a great deal and have made themselves available as a resource to coaches and athletes all across the country. The two-and-a-half-year road to Paris is well paved with our coaches remaining in place.”

“I would like to thank USA Water Polo leadership, including the board of directors, for their continued support,” said Krikorian. “The opportunity to coach these remarkable women and the honor I feel in helping lead this program forward is not something I take for granted. With the shortened time frame to Paris 2024 and an eye on Los Angeles 2028, the work ahead will be extensive and undoubtedly stimulating.”

Considered one of the great water polo tacticians in the game today, Udovicic will continue his development of Team USA with an eye on the program’s first Olympic medal since 2008. Since taking the controls of Team USA in the spring of 2013, Udovicic has revitalized the USA Men’s National Team pipeline, opening opportunity and access to a record number of athletes in his tenure while facilitating an unprecedented amount of international club activity abroad. This past summer in Tokyo, Udovicic helped Team USA improve from a 10th place finish in Rio to a sixth-place mark, equaling the program’s second-best finish over the last quarter century. Along the way he’s guided Team USA to Gold Medals at the 2015 and 2019 Pan American Games and Silver Medals at the 2016 and 2021 FINA World League Super Final. Well-known on the European water polo scene, Udovicic helped 19 Team USA athletes secure club agreements during the 2020-21 season with a host of players back in Europe capping up for the current season.

“I’d like to thank Chris Ramsey, John Abdou, and the USA Water Polo board of directors for their continued trust in me leading the men’s program. Just as important, I must thank the men on this team. The work they have put in over the last five years has been so necessary in everything we have accomplished and will accomplish in the future. This group gets better with every match, and I’m excited to build off of our results in Tokyo. We had the youngest team at the Olympic Games, but we showed we can compete with everyone. With our experience as a team and the important time our athletes are spending in Europe, this will give us a strong position headed to Paris. I’m looking forward to the challenge,” said Udovicic.

The next major events for both USA Water Polo Men’s and Women’s Senior National Teams are the FINA World Championships, set for May 13-29, 2022, in Fukuoka, Japan.