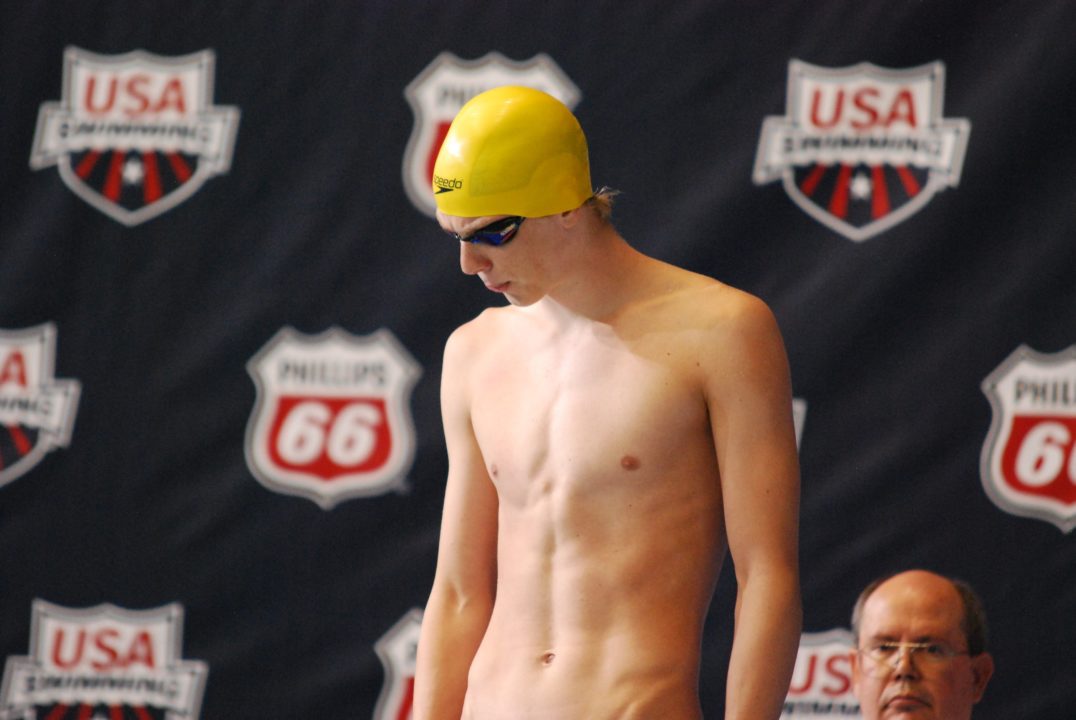 The Dayton Raiders' Brock Turner is one of three swimmers added to the Junior National Team. (Photo: Janna Schulze/SwimSwam.com)

USA Swimming has updated their 2013-2014 Junior National Team roster, to correct for a few errors in the selection process.

There were a few errors in reported times, which we’ve updated though they’re largely inconsequential, but the important changes are swimmers who were added to and removed from the Junior National Team.

Tennessee sophomores-to-be Faith Johnson and Sean Lehane are both very, very young for their grade levels. Both were still 18 as of September 2nd, the age deadline for the Junior Nationals roster, but there is a clause in the rules that doesn’t allow anyone who has finished their freshman year of college onto the team.

Therefore, Johnson will move out of the 50 free, and Kaitlyn Albertoli from the San Clemente Aquatic Team, thanks to a 25.86 at Junior Nationals, will join the roster.

Meanwhile, Lehane’s spots in the 100 and 200 back will be replaced by Hennessey Stuart with a 56.64 from Junior Nationals, and Brock Turner from the Dayton Raiders with a 2:02.00 in the 200 back also at Junior Nationals.

The third swimmer left off of the team, by the merest of margins, is backstroker Courtney Mykkanen, daughter of 1984 Olympic silver medalist John Mykkanen, in the girls’ 100 back. An error in times had Kaitlin Harty where Kylie Stewart should have been, and the rest of the swimmers slid down a spot, meaning that Mykkanen’s 1:01.88 was just a sliver behind Ally Howe’s 1:01.87 for the 6th and final spot on the roster.

The silver lining here is that Mykkanen is only 15, incredibly talented, and will surely be on another Junior National team before she turns 19.

A summary of those swimmers added.

This is an unfortunate scenario for all involved, but all swimmers involved have great futures within the sport. Congratulations to Kaitlyn, Hennessey, and Brock on their inclusion.

Note that Johnson was also listed in the 100 free, but 7 names were listed in the original roster, so nobody was added to take that spot.

The full, updated roster is below.

Isn’t Kaylin Moss (200 breast) going to be a sophomore at Stanford as well?

swimmer24 – correct as also. Email sent, will correct when confirmed.

Hennessey Stuart is going on a recruiting trip to NC State this weekend.