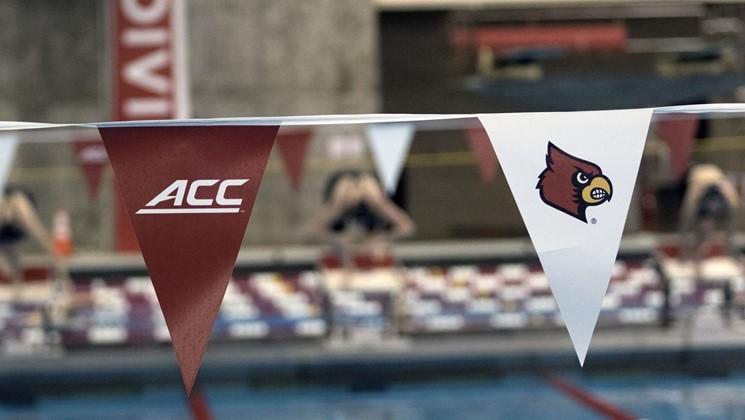 Louisville has suspended its swimming voluntary workouts for 2 weeks after 3 members of the program tested positive for coronavirus. Archive photo via Louisville Athletics

The University of Louisville halted all men’s and women’s swimming & diving voluntary activities at the Ralph Wright Natatorium for 2 weeks on Saturday. This came after 3 members of the program tested positive for coronavirus.

“All proper procedures and protocols are being followed, including the quarantining of those impacted,” the release said. “We look forward to a resumption of swimming activities soon.”

Undergraduates are due back on campus at Louisville to begin classes on August 17. The school has announced a hybrid plan with in-person classes continuing until the day before Thanksgiving, moving fully online for final exams after the Thanksgiving break. Many classes will be a combination of virtual and in-person learning.

Louisville was one of the first college swim teams to return to the water for voluntary activities in early June. At the time, there were 13 swimmers and 2 divers as part of the group. The school currently has 27 members of the swimming & diving program (men and women combined) on campus.

Swimming & diving was one of four sports that were allowed to return under the school’s first phase, in part because it was easy to isolate the swimmers and divers in the natatorium away from other groups returning to campus.

Under NCAA rules, student-athletes are allowed to participate in voluntary conditioning activities without coaches (other than for safety purposes). In swimming, the line between “conditioning work” and “skills training” is a very thin one, meaning that workouts look essentially like a normal workout, but without coaches.

Last week, we reported that multiple members of the Texas A&M swimming & diving program had also tested positive for coronavirus. Unlike Louisville, Texas A&M athletics staff would not reveal the number of positive tests.

Louisville has not reported as many positive cases in their returning programs as have other schools, though a “support” staff member for the football team did test positive in late May, prior to returning to campus.

The state of Kentucky saw its highest-recorded single day run of new cases, reporting 979 on Sunday, but even with that spike, the state has relatively-few cases. With just over 23,000 confirmed cases among a population of 4-and-a-half million, Kentucky ranks 10th-best in terms of fewest cases-per-million. Their 691 deaths caused by COVID-19, however, does not stack up as well against other states, though they have not seen a rise in deaths along with their rise in new positive tests over the last 2 weeks.

Jefferson County, where Louisville is located, has seen more cases than anywhere else, with 5,170 recorded so far. It is, however, the state’s largest county, and its rate-per-capita of positive tests is in-line with other parts of the state.

IU open or shut down?

But how do you know who isn’t positive? Tests are taking anywhere from 3 days to 2 weeks to return results. The few swimmers that tested positive here could have easily spread it to another swimmer in the time period between being tested and getting results.

You don’t take the risk of just continuing everything else when it could still be spreading throughout the team. Stop it all for a couple of weeks, reset, go back.

In some places the results take a long time. In others not so much.

DOCONC is a doctor. He works at a hospital. So, their tests get run first.

DOCONC also seems to lack empathy, based on his posts in general. So, he has trouble processing that his experience as someone who works at a hospital might not be the same as everyone else.

U seem to presume much u don’t know

2 weeks for a result is a fabrication

Not true. In where I live, Contra Costa County, On 7/8/2020 I was trying to get my son tested. Tried to schedule an appointment here: https://www.coronavirus.cchealth.org/get-tested (drive up testing is available in contra costa county, but not without an appointment) First available appointment was 7/14/2020. I had to keep refreshing the page, and over time finally a same day appointment became available. He got swabbed on 7/8/2020 at the Concord Testing site. When I went there, they told me it usually takes them 5-6 days to get a result, but because of the high volume of tests it will take 9-10 days. So far I have gotten one text message on 7/14/2020 from “81906” saying : “Hi ___. This is… Read more »

It’s not a fabrication. Our health department and labs are overwhelmed. A friend waited 15 days for his positive result.
https://www.knoxnews.com/story/news/local/coronavirus/2020/07/19/knox-county-test-results-delay-contact-tracing/5460324002/

A co-worker in Ohio took a test in her doctor’s office 7/7. Still no results as of 7/20, so the Lorain County Board of Health cleared her anyway, regardless of the test results coming back, because she had quarantined herself the 14 days while waiting for for results that never came. No contact tracing either.

My sister had a test recently and the results took five days. Maybe they can theoretically be done in 15 minutes but I don’t know anyone who got results in under 24 hours.

UFC has a pretty good system of testing down for an event.

30 hrs for saliva based results out here in AZ. I know of others in AZ that took 5-6 days for non saliva based.

I run an essential business. My tests are averaging 8 days.

DOCONC – In NM…test results are now taking 10 to 14 BUSINESS DAYS!!! We had one athlete get their results 18 days after testing! In ABQ, you will sit in your car (at Balloon Fiesta Park) waiting a MINIMUM of 5 hours to get tested…and that’s if you are in line by 5 am! They open up testing at 7am! If you come at 7am, you will wait 8 to 9 hours! And this was someone that tested last week!!!!

15 minutes to 24 hours would be AWESOME…not realistic in NM!

That’s a shame. Bad governor. Ohio has testing everywhere. I get pts tests in 2-3 hrs before surgery if needed
My kids got results 48 hours from exposure
Much quicker here

Sorry doccondescending, but my daughter had surgery in Ohio not long ago and they required her to be present 72 hours prior to do the test to ensure the results would be back. Why would you test within 48 hours of exposure anyway, the viral load doesn’t kick up that fast – recommendations are 5-7 days post known exposure or once symptoms appear. Just because your slice of Ohio is supposedly doing it a certain way doesn’t mean there aren’t plenty of people facing large time lags in test results.

U don’t have elective surgery if u are symptomatic

Don’t certain teams live together? They should just do that.

“it’s inevitable that some team members are going to test positive at some point” yeah, in the US. Not in the rest of the World where they dealt with the virus

Yes, not ideal but having any kind of season (stop and go) is better than none at all.

What I’ve noticed during this pandemic is that when we fear that something will get cancelled often it does. That went from NCAAs to Olympics in 2020 to the summer season in the US (for the most part). At this rate, it pretty much looks like the NCAA season won’t really be able to happen. Honestly, unless the virus is practically entirely contained, I think they should just cancel the season and give them another one in return. I’d rather be on the safe side than risk having to do it all again, so I think we need to be really patient with reopening and wait until cases are extremely low. Downvote me all you like people.

I love this sport more than anything, and I’m heartbroken that COVID has likely ended my career, but the reports of what it has done and is doing to young people is terrifying. The thought of any of my teammates having strokes, seizures, or even dying due to this virus is incomprehensible; I would much rather scrap the season than even risk having that happen.

Where is the SCIENTIFIC DATA which supports that healthy college age athletes are at risk of strokes, seizures or dying due to this virus?

Everyone is at risk but the bigger issue is when a healthy college aged kid gets it and then spends time with his/her parents/grandparents or has contact with someone that has a weakened immune system.

It’s not just about the college kids. It’s much bigger than that.

The only time college swimmers are going to spend time with parents/grandparents is if they come to a meet or at Thanksgiving. Social distance during meets. Trying to keep swimmers safe is like trying to keep your teenager safe when they drive. The opportunity for someone to die from Covid is lower than dieing in a car crash. Oh and another thing – since when do the doctors know everything? Since when has the NCAA served the best interest of the student athlete?

Ken – I’m not sure what data set you utilize to come to the conclusion that the opportunity for someone to die from Covid is lower than dying in a car crash; however, if you compare total fatalities, Covid-19 has resulted in more deaths in the USA.

If we look at global numbers, death by auto does indeed surpass current Covid deaths.

Death rate per 100,000 population is higher with auto; however, one has to consider total driving opportunities or miles. When comparing by miles or opportunities, Covid becomes more dangerous.

The above links are comparing 12 months versus 8 months. A more accurate comparison can be made in four months.

But it’s not the flu. Literally is not the flu. But yeah let’s keep acting like this doesn’t exist so when flu season gets here, we do cancel events and do get sent back home from work, school etc.

We consistently, as a country, act as if this doesn’t exist which leads to all these things happening(or not happening in this scenario)

Given the plethora of pulmonary embolisms and now advancing numbness, weakness, and muscle stiffening in her extremities currently being experienced by my 22yo former d1 swimmer, I would say it is safe to assume everyone is at risk for anything with this virus. “At risk” doesn’t mean it WiLL happen, but if you think it cannot, you are just not in touch with the reality of what is happening right now.

SWIMMOMFL, I’m so sorry your daughter is experiencing this, we know of another college swimmer having long term effects as well, it’s very scary. I’m so tired of hearing “it’s just the flu”… Wishing your daughter a full recovery!

Thank you swimx2… hope the swimmer you speak of is getting good care. I’d love to put them in touch with each other as this is an awful, scary, lonely experience for her.