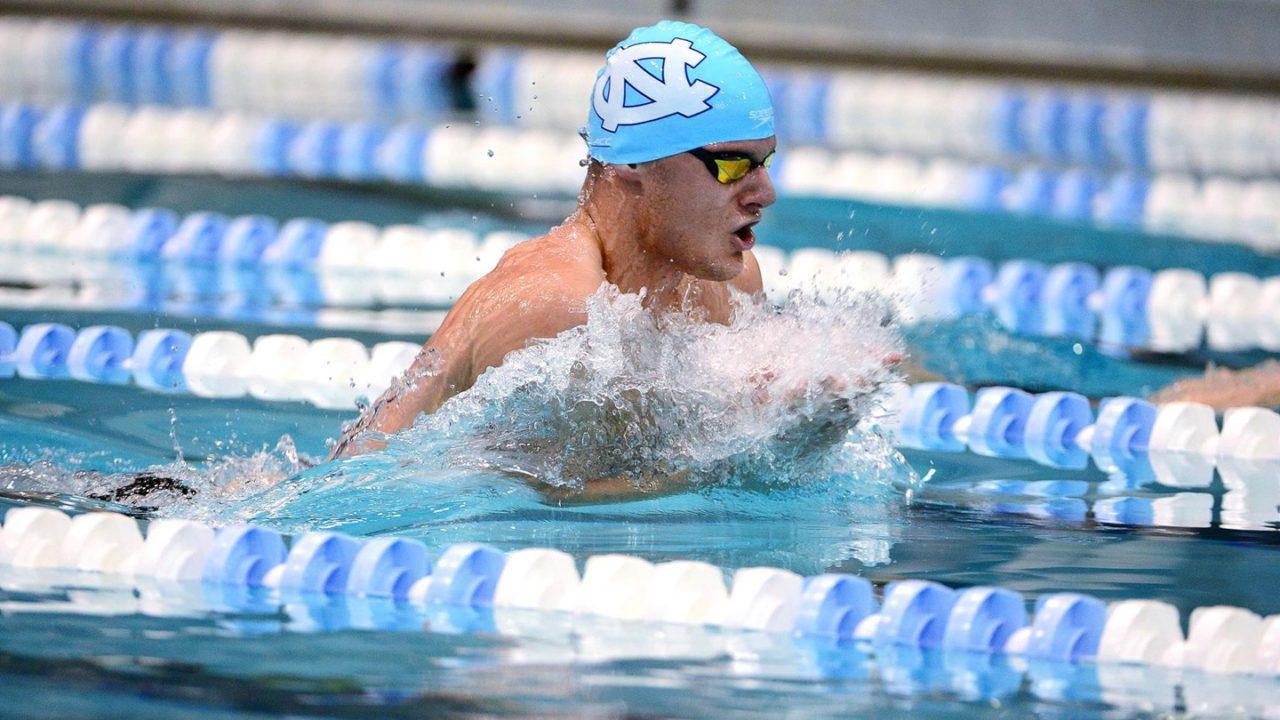 On their third attempt in less than 48 hours, the UNC men's 200 medley relay of Burhans, Abaliksta, Poelke, and Messenger broke the program record at 1:24.23. Stock photo via North Carolina Athletics

The UNC Tar Heels held a last chance meet for select swimmers at the Koury Natatorium on Sunday. After the single-day affair, which featured a prelims/finals set-up plus additional time trials, a total of four school records went down. Earlier from February 24-27, these last chance swimmers competed at the 2021 ACC Men’s Championships, where Louisville won the title by two points over NC State. Meanwhile, Virginia Tech placed a valiant third place finish, UNC earned their best finish in 5 years at 6th, and Duke placed 10th of 12 teams.

Highlighting the meet was the UNC men’s 200 medley relay program record, which went down after two previous attempts in less than 48 hours. Before tearing it up in Chapel Hill, the UNC men posted a season best of 1:24.46 at the Janis Dawd Hope Invitational from December 2020, which ranked 21st in the NCAA. At the 2021 ACC meet, UNC placed 8th at 1:24.80, with backstroker Tyler Hill being replaced with Tucker Burhans. Fast forward to yesterday morning, the UNC quartet of Burhans, Valdas Abalikšta, Boyd Poelke, and Jack Messenger first swam an attempt of 1:26.01, with all four legs gaining from their ACC splits.

Reseting into Sunday’s meet, the same quartet improved to a morning effort of 1:25.46, featuring Poelke’s 20.33 fly split. Resting again towards one last attempt during evening finals, the relay was finally able to drop from this morning and take down the UNC program record, clocking in an NCAA “A” cut of 1:24.23. That now moves UNC to 19th with Utah in this season’s NCAA rankings.

College swimming had pouch at 32 before his prelim swim

Anyone watching exchanges, if so they probably had eyes closed

Relay swims in these last-chance time trial sessions should require the use of electronic relay exchange monitoring and visiting officials should be monitoring stroke and turn. This game has been played long enough…

Exactly most people know that home field judging, SADLY, exists in these last change ding dong homer chance meets. Of course rarely do the teams that “make the standard” swim as fast at the real meet.

You can watch the race vid and easily see that all the exchanges were legal.