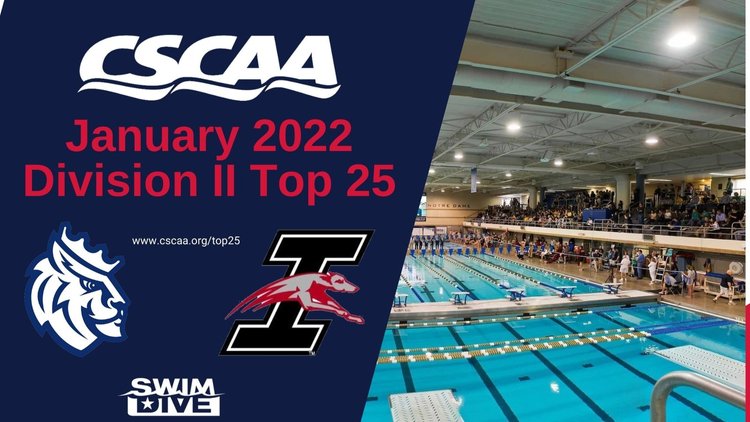 The UIndy men earned all but two of the top votes to take first in the polls with 148 points, while the Queens women were the unanimous #1 pick (150 points). Current photo via CSCAA

UIndy men earned all but two of the top votes to take first in the polls with 148 points. Four points behind is Queens (144) as they collected the remaining first-place votes. Drury (140 points), Colorado Mesa (131) and McKendree (124) all held their positions from December at third, fourth and fifth.  After an impressive showing on January 5th, Delta State clinched 99 points and joined the pole at 9th.  Saint Leo (9) debuted this month at 24th. In all, thirty-one men’s teams received votes.

The committee unanimously agreed that Queens (150), UIndy (144) and Drury (138) are the top three women’s teams, in that order, this month. Nova Southeastern (129) moved up three spots to fourth. Colorado Mesa (119) rounded out the top five. The women’s poll has two new teams ranked with Delta State (50) at 18th and Saint Leo (32) at 21st. Thirty-two women’s teams received votes.

You can find a complete list of the rankings at: www.cscaa.org/top25

The rankings are voted on by CSCAA-member coaches and select media. The committee includes six representatives from division II institutions and two media members. Ben Hewitt (Nova Southeastern) chairs the men’s committee and James Kiner (Tampa) chairs the women’s committee. The remaining polls are scheduled for release on February 9 and March 4. These dates are subject to change.