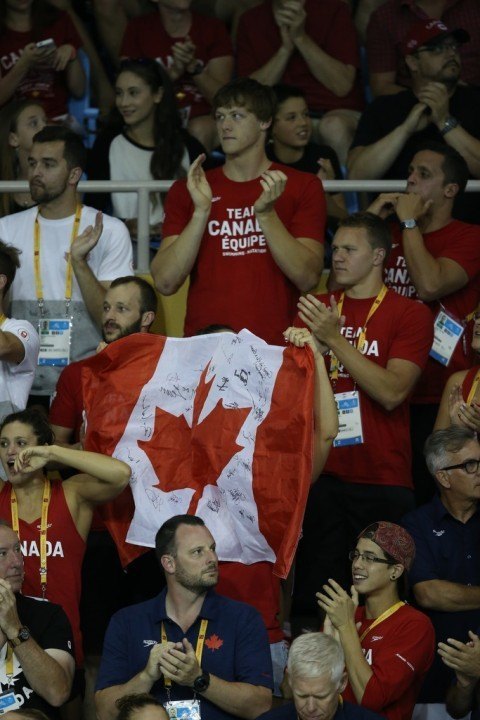 On Tuesday, June 28th, the Toronto City Council will consider bidding for the right to host the 2022 Commonwealth Games. Archive photo via Chris Tanouye/www.ChrisTanouye.com

As SwimSwam reported earlier this month, Durban, South Africa, hometown of 2012 Olympic gold medalist Chad le Clos, was stripped from hosting the 2022 Commonwealth Games, due to rising costs associated with hosting the Games and Durban’s failure to establish an Organizing Committee and to confirm underwriting arrangements.  In the wake of Durban’s elimination as host, a number of other Commonwealth Cities have expressed interest in hosting the 2022 Games, including Toronto.

On Tuesday, June 28th, the Toronto City Council will consider bidding for the right to host the 2022 Commonwealth Games. Similar to Los Angeles’s bid to host the 2024 Summer Olympic Games, Toronto would structure its bid around pre-existing facilities used when hosting the 2015 Pan American Games.  Unlike Durban, Toronto would not need to build massive new stadiums or other venues to accommodate athletes and crowds.  However, Toronto does not have a large athletics stadium; at present, with a capacity of just 3,000, the York Lions Stadium is the largest venue for track and field.

Since the Commonwealth Games Federation (CGF) confirmed that it was stripping Durban of the right to host in 2022, several other Commonwealth members have expressed interest in hosting the 2022 iteration of the Games.  Liverpool and Birmingham, both in the United Kingdom, immediately vocalized interest in hosting.  Australia has also mentioned its willingness to take on the 2022 Games, in what would be the second-consecutive Games hosted on Australian soil.

Sam Coffa, President of the Australia Commonwealth Games Association, said “As early as August [last year] I put my hand up to say [to the Commonwealth Games Federation (CGF)] ‘should there be a problem with a host city for 2022, then Australia would consider hosting the Games in Australia’,” he said per the Sydney Morning Herald.

Sydney, Adelaide, Perth, and Melbourne have all pronounced interest in hosting the 2022 Games.  While Melbourne has hosted as recently as 2006, Canada has not hosted since 1994 when the Games were held in Victoria.  The CGF is yet to set a strict timeline for the forthcoming bids and when it will make a decision regarding the 2022 Games.  However, the “motion is subject to referral to the Economic Development Committee” of Toronto and will require a two-thirds vote to waive the referral before Toronto can officially bid for the 2022 Games.