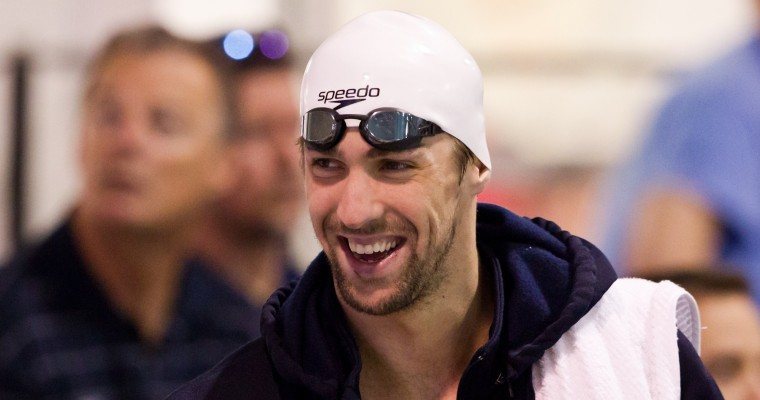 Based on Phelps’ heroics in Beijing, here are the top 8 names for Phelps and Bowman's next pony.

Bob Bowman and Michael Phelps have partnered up again, this time in the world of thoroughbred racing. Bowman posted an image of the pony, aptly named “Water Cube” after the aquatic centre used for the Beijing Games in 2008.

This isn’t Bowman or Phelps first foray into the world of competitive horse racing. In 2008 one of Bowman’s other horses, Vanderkaay (yes, named after US Olympian Peter Vanderkaay), won the Dancing Count Stakes.

Based on Phelps’ heroics in Beijing, we thought it would be fun to come up with some pony names for Phelps and Bowman’s next pony. There are some rules to be followed, including that the name cannot be longer than 18 characters (including spaces and punctuation), be completely made up of initials, and using the names of a living person requires written permission.

Here are 8 names for Phelps and Bowman’s next pony:

1. Guitar Smash. Previous to the men’s 4x100m freestyle relay on the opening night of the Olympics Alain Bernard, at the time world record holder in the 100m freestyle, was quoted, “The Americans? We’re going to smash them. That’s what we came here for.” Needless to say, the quote added even more fuel to the fire for those involved, hyping up what was already a much anticipated event.

2. Thank You Jason. In that 4x100m freestyle relay, the Americans – led by an American record lead-off by Phelps – would upset the favored French to keep Phelps’ hopes of 8/8 alive. Jason Lezak would swim out of his mind to catch the big Bernard on the final leg. His split was also the fastest relay leg in history, swimming a 46.05 in staging an improbably comeback against the former world record holder in the 100m freestyle.

3. Butterfly Blind. In the 200m butterfly final Phelps goggles filled up with water. Over the last 75m of the race he swam basically blind, unable to rip his goggles off because of the two caps he was wearing. He was able to win gold and break his own world record simply by counting his strokes on the final 50m.

4. Tale of Two Mikes. In the 100m butterfly Phelps was the second fastest qualifier behind Serbia’s Milorad (Mike) Cavic. For the year prior Cavic had been saying he was going to win the race in Beijing, setting up a battle royale that night in the Water Cube. The two stared each other down before they got on the blocks, and in the end it would be Phelps chasing down Cavic to win by the slimmest of margins, just 1/100th of a second.

5. Touch of Class. Despite the war of words prior to the 4×100 free relay, lost in the aftermath was Phelps going over to a destroyed Bernard, still in the water, and offering words of encouragement and a hand shake. Similarly, after the razor close finish between Cavic and Phelps in the 100m butterfly, the Serbian delegation launched an official protest, insisting that Cavic had touched first. Cavic was gracious in defeat, “It was up to me, I would just drop the protest. I’m stoked with what happened. I’m very, very happy.”

6. Epic Seven. Even though Mark Spitz wasn’t present when Phelps equaled the mark of 7 golds in one Games, he was gracious and complimentary when reached at the time. “Epic,” he told reporters that summer. “It goes to show you that not only is this guy the greatest swimmer of all time and the greatest Olympian of all time, he’s maybe the greatest athlete of all time.”

7. Medley Gold. The final race of the Beijing Games, and the 8th gold medal and 7th world record of the meet, was the medley relay. Partnered up again with Lezak, as well as Aaron Peirsol and Brendan Hansen, Phelps would split a blistering 50.1 to power the US to gold, and beating their own world record set 4 years earlier in Athens.

8. Speedo Million. Speedo had floated a $1 million bonus to Phelps if he tied Spitz mark of 7 golds in a single Games prior to the Athens and Beijing Games. They’d had the prize money insured the first time around, meaning they only would have had to pay out $300k in 2004 if he’d succeeded, but heading into Beijing his swimming had been going so well that there was limited upside for any insurance takers, bellieving the premium to be upwards of 90% of the prize money. Regardless, Phelps would tie and break the record, securing the $1 million bonus, which he promptly used to fund the Michael Phelps Foundation.

How about: You Got Lezaked

Or Phelps’d, my team has always used that in reference to how he always swam his 100 butterfly, but especially that one in Beijing

I feel like the whole situation that #1 describes would better suit Thorpe in 2000.

#1 it wasn’t Alain Bernard 2004 … it was Gary Hall : 2000 Olympic Games …previous to the men’s 4x100m freestyle relay, speaking ot the Australians “we will smash them like guitars”…Australia won….

I know they were planning on naming a horse “Schmitty”….did they ever do it?

I am not sure