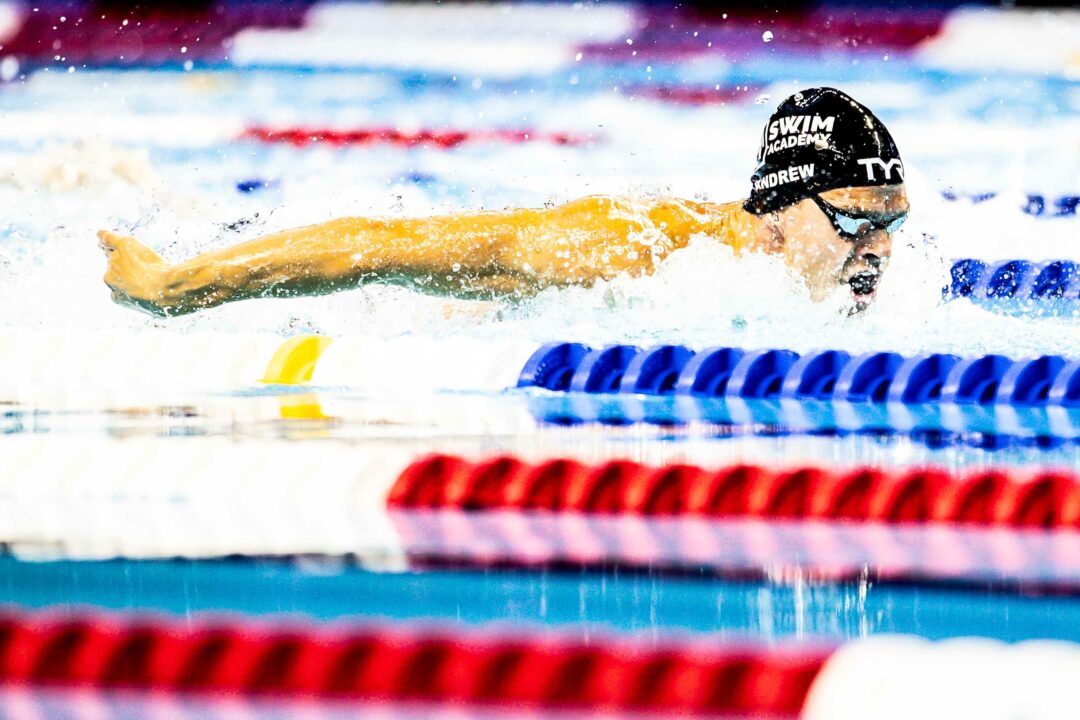 With Michael Phelps on his second retirement, someone other than Phelps will be the Olympic champion in the men's 200 IM for the first time since 2000. Archive photo via Jack Spitser/Spitser Photography

Tokyo will witness a new champion in this event for the first time since 2000 as Michael Phelps’ (second and seemingly final) retirement will bring to a close his record streak of four-straight titles. However, a pair of American and Japanese stars are among the leading contenders to fill the void left by Phelps’ absence.

Michael Andrew of the USA etched his name into the record books at the U.S. Trials, blasting a 1:55.26 in the semi-finals to become the 5th-fastest performer in history. Andrew’s “fly and die” approach generates plenty of discussion, and drama, but it seems to be working for him, as he has the fastest time in the world by 0.76s this calendar year. But, for a quick comparison, here’s how Andrew’s splits from Trials compare to the lifetime best swims from the five other men who are among the top ten performers all-time and are schedule to swim this event in Tokyo.

Andrew’s teammate and Phelps’ former training partner Chase Kalisz took 2nd at US Trials with a time of 1:56.97. He swims his race totally different than Andrew, taking it relatively easy on the front half, then hammering the competition with a blistering breaststroke leg. He won gold in this event both at 2017 Worlds and 2018 Pan Pacs in 1:55.40, and if he can get back into that range, he’ll be in the hunt for a medal.

While they haven’t been near the top of the world rankings this year, a pair of Japanese stars will be contending who’ve been regular contenders on the world stage in this event. First up is defending World champion Daiya Seto. He’s “only” been 1:57.41 so far this season, but has been 4:09 in the 400 IM recently, and clocked a 1:59 in the 200 IM minutes after swimming 1:57 200 fly at the Japan Open. He’s openly targeting Michael Phelps’ 400 IM world record, and if he’s anywhere close to that, he should be a lock for a medal in this event. However, this will come at the end of a pretty packed schedule for Seto — he’s also scheduled to swim the 400 IM and the 200 fly.

Kosuke Hagino won back-to-back silvers at the 2016 Olympics and 2017 Worlds, and while, like Seto, he’s only been 1:57 this year, he’s the 3rd-fastest performer ever in the event, with a 1:55.07 from April 2016, just a few months before the Rio Olympics. While Hagino has taken on busy schedules before, this time around he’s focusing on this event and won’t be swimming the 400 IM or the 200 back, two events in which he ranks among the fastest of all time.

China’s Wang Shun has been looking strong over the last year, clocking a 1:56.27 back in October and then a 1:56.78 this spring. The 27 year-old has was a fixture on medal stands for a few years, earning bronze in Rio and at the 2017 World Champs, winning gold at the 2018 Asian Games and the 2018 Short Course World Champs, before slipping to 6th at the 2019 World Champs.

Great Britain’s Duncan Scott has honed on this event recently, and he clocked a 1:55.90 at Trials to break the British record. Scott finished 5th in this event at the 2018 World Championships. This will be a new Olympic event for Scott, who’s traditionally been more of a freestyler and has medaled individually in the 100 and 200 freestyles at major international meets,

Rio 200 back silver medalist Mitch Larkin will be not be aiming to repeat his medal performance in that event, and instead, he’ll be swimming the 200 IM, which was more of an area of focus when he was younger. He has 4th-fastest time in the world this year with a 1:56.29, and went 1:55.72 back in 2019.

Hugo Gonzalez heads to Tokyo with the 5th-fastest time in the world this season, a 1:56.31 from last month’s Mare Nostrum meet. Gonzalez looked sharp at that meet, setting a meet and Spanish national record with that time, and it wouldn’t take much of a drop to put his name into contention for at least a minor medal.

Germany’s Phillip Heintz is a veteran at this point, having competed in this event both in 2012, when he didn’t make it out of prelims, and in 2016, when he finished 6th. He was 1:56.42 back in December, and holds the German national record in the even with a 1:55.76 from the 2017 German Championships.

2019 World silver medalist Jeremy Desplanches of Switzerland earned that same medal behind Gonzalez at Euros earlier this year, putting up the #7 time in the world with a 1:56.95.

Hungary’s Hubert Kos cracked the world junior record with his 1:56.99 back in May in semis as Euros, a time that would’ve earned him bronze had he repeated it in finals. Instead, that bronze medal went to Alberto Razzetti, whose 1:57.13 from April’s Italian Olympic Trials puts him just inside the top ten in the world this year.

China’s Qin Haiyang, Russia’s Andrey Zhilkin, and South Africa’s Matthew Sates are all seeded in the top 15 and any could make a run at the top 8 with relatively small drops.

Finally, it’s worth noting that this could be the last Olympic swim for Hungarian legend Laszlo Cseh, who took silver in this event in 2008 (one of three individual silvers behind Phelps) and bronze in 2012, and also earned a silver in the 100 fly, tying with Phelps, in Rio. Cseh’s best time since 2016 is a 1:57.79 from the 2019 Worlds, so he doesn’t project to be in the medal hunt, but it’d be foolish to completely discount the possibility that Cseh could pull together one last great swim and at least find himself in the final.

Dark horse: Swims fans who follow NCAA swimming closely may recognize the name of Caio Pumputis, who’s had a solid career at Georgia Tech. He’s seeded 16th with a 1:57.70 from 2019 and went 1:58.53 during April’s Brazilian Trials — a meet that was affected by adverse weather conditions and slow overall.

I haven’t the faintest clue who’ll win this one. Certainly quite a few for whom one can make viable arguments for but no clearly stands out.

If pushed, I think its either one of the Japanese or Scott. Andrew COULD, but also a strong liklihood of “crash and burn”. Kalisz could podium but would be surprised if he wins. Larkin = No, unless this proves to be that rare meet when he actually gets his act together (emphasis on rare).

Glad to see you mention Laszlo Cseh. Deserves the recognition.

From what I have observed, he is the only one who does only 1st kick in butterfly, no 2nd kick like others do.

From what I have seen on the video of his 200m IM, he looked excellent in breaststroke, just like his butterfly. His backstroke looked just ok. His freestyle, being the last leg, looked below average or mediocre, probably because he got tired (?).

He’s like a race car that driven as fast as possible with no concern for the gas gauge. Then all of a sudden he runs out of fuel and has to coast across the finish line.

It seems that he needs vaccination to change his habit. 🙂

My hope is that Andrew will save some of his energy in early rounds and save his best swim for the final. If he does it he will win.

This is one of the toughest to pick, Michael can just as easily win this or come last, so hard to predict. Seto, is very solid in all strokes & swimming at home, but has had his issues, Duncan Scott, will be flying home & one to watch, but is he focusing on 200 free or IM. Lakin also will fly home, but can he swim faster in Backstroke, his favourite stroke. There also Hagino & a couple of Europeans ready to pounce.
OK Seto to win it for Japan, ahead of Andrew & Scott.

Defintely a semi-final swim, would love to see him sneak into the final too, but I think we might have to wait until 2024 to get that medal potential swim